To the Editor: We report maternal–fetal transmission of Cryptococcus gattii and death in a wild porpoise. Cryptococcus neoformans and C. gattii are 2 environmental, encapsulated yeasts that cause invasive, potentially life-threatening infections in humans and animals (1). C. neoformans causes disease in immunocompromised hosts, and C. gattii is also pathogenic in immunocompetent hosts (2). Since 1999, cryptococcosis caused by C. gattii has appeared on southern Vancouver Island (British Columbia, Canada) and nearby surrounding areas (2,3). Spread beyond Vancouver Island has been documented along the Pacific Northwest Coast, but the mechanism remains undetermined (4).

A pregnant, dead, stranded, harbor porpoise (Phocoena phocoena) was reported on February 22, 2007, on western Whidbey Island, in Puget Sound, Washington State (48.2833°N, 122.7283°W). The carcass was iced and necropsy was performed on February 24. Sampled tissues from the adult and fetus were divided: half fixed in 10% formalin for histopathologic analysis, and half frozen for ancillary studies.

For histologic analysis, tissues were embedded in paraffin, sectioned to 3–5 μm, and stained with hematoxylin and eosin. Selected sections were stained with mucicarmine. The adult porpoise (length 177 cm, weight ≈57.7 kg) was in poor condition (reduced blubber layer). Both lungs were exposed, extensively scavenged, firm, and nodular; a sectioned surface exuded clear to slightly opaque gelatinous to mucinous discharge. Mediastinal lymph nodes were grossly enlarged, multinodular, and firm with large numbers of yeasts visible by microscopy (online Appendix Figure, panel A, www.cdc.gov/EID/content/17/2/304-appF.htm). The first stomach chamber contained two 3.5 cm × 2.5 cm raised, centrally umbilicated ulcers and several embedded anisakid nematodes. The uterus was gravid in the right horn with a mid-term fetus. No other gross lesions were identified. Microscopically, the lung lesions correlated with granulomatous to pyogranulomatous infiltrates, often with a myriad of yeasts. 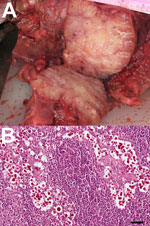 Figure. A. A) Enlarged mediastinal lymph nodes of a stranded, pregnant, harbor porpoise (Phocoena phocoena) infected with Cryptococcus gattii that was transmitted to its fetus. B) Mucicarmine–stained sections of fetal mediastinal lymph...

The male fetus (length 30 cm, weight 2.4 kg), was examined separately at a different facility than the dam. It appeared grossly normal externally and was at a gestation of ≈5–6 months. Mediastinal lymph nodes had mild granulomatous inflammation and contained numerous yeasts morphologically consistent with Cryptococcus spp. (FigureA, panel B). The lymph nodes were partially replaced with intracellular and extracellular mulilobulated yeast aggregates (length 8–20 μm) with pale eosinophilic central regions and a thin refractile wall peripherally bound by a 5-μm nonstaining capsule. Around the periphery of these aggregates, there were small numbers of macrophages and lymphocytes and fewer neutrophils. Specific staining showed a prominent mucicarminophilic capsule consistent with Cryptococcus spp.

Yeasts were found in the amniotic fluid and interspersed within the chorioallantoic villi and submucosal vasculature of the placenta. Mild multifocal nonsuppurative myocarditis was detected. However, no yeasts were seen in inflamed areas. There were no overt lesions in the remaining organs.

Fetal infection was most likely hematogenous, disseminated from a primary maternal pulmonary source to the uterus and subsequently to placental vasculature and internal fetal tissues. Infection by aspiration or ingestion of contaminated amniotic fluid was also possible. Although close evaluation of the lung did not show any discernible yeasts, the organism may have been present in an area other than that sectioned.

Wild porpoises in the Pacific Northwest Region, being near shore inhabitants in waters surrounding Vancouver Island, may come into contact with air containing C. gattii at the air–water interface or ingest seawater containing yeasts while feeding (7). Their proximity to a habitat containing Coastal Douglas fir (Pseudotsuga menziesii) and Western hemlock (Tsuga heterophylla) may play a role in the epidemiology of C. gattii because these trees have been associated with cases of C. gattii (8). Cryptococcal infection during pregnancy has been reported in humans and horses (9,10).

This fetal case of cryptococcosis may have major human and animal health implications. Further studies should be undertaken to assess possible fetal involvement, identify infections in pregnant females, and provide information on risk reduction and improving diagnosis and treatment.