We determined the proportion of foreign-born persons with tuberculosis (TB) in Singapore. This proportion increased from 25.5% in 2004 to 37.6% in 2009. Unskilled workers from countries with high incidences of TB accounted for the highest number of and greatest increase in foreign-born TB case-patients.

Singapore, an island city-state (area 710 km2) in Southeast Asia, liberalized its immigration policy and underwent rapid economic growth during 2005–2010. This policy resulted in a marked increase in its population from 4.17 million in 2004 to 5.08 million in 2010, which was largely caused by an increase in foreign-born persons comprising long-term pass holders (LTPHs) (permission to stay in Singapore >6 months), permanent residents (PRs), and naturalized citizens (1). In recent decades, mass immigration and influx of nonimmigrants from countries with high incidences of tuberculosis (TB) to industrialized countries have contributed to the epidemiology and incidence of TB in host countries (2–9). We report the epidemiology of TB in foreign-born case-patients in Singapore during 2000–2009.

Notification of TB cases to the Singapore TB Elimination Programme (STEP) Registry is mandated by law. Since 1998, the notification report has included disease characteristics, sociodemographic information, country of origin, immigration status, and year of arrival in Singapore of TB patients (10). All notifications during 2000–2009 were obtained from the STEP Registry database. When data on country of birth were not available for persons not born in Singapore (0.5% of case-patients), the nationality of these persons was assumed to represent their country of birth. Missing information about country of birth for persons with a Singaporean nationality (17%) and arrival date (6.5%) were matched against a database provided by the Ministry of Home Affairs.

Persons not born in Singapore were considered foreign born. Foreign-born case-patients comprised naturalized citizens, PRs, and LTPHs. Singapore issues long-term passes to skilled and unskilled workers and others (students and foreign-born family members of citizens or PRs) to enable a stay >6 months in Singapore. Persons applying for permanent residency or long-term stay and renewal of long-term passes are given medical examinations that include a general physical examination, chest radiograph, and testing for HIV (11). The Department of Singapore Statistics provided 2000–2010 population data. We estimated the number of persons born in Singapore during 2000–2010 by using linear interpolation based on 2000 and 2010 population census exercises. Consistent with the country classification used in the Singapore 2000 population census, People’s Republic of China, Hong Kong, and Taiwan were classified as 1 group of country of birth. 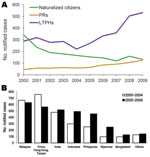 The decreasing trend of foreign-born persons with TB in the first half of the study period could be attributed to fewer transient migrant workers entering Singapore during the economic crisis in Asia and the severe acute respiratory syndrome outbreak in 2003. After economic recovery and liberalization of the immigration policy in Singapore in 2005, there was an influx of migrant workers and immigrants from countries with high incidences of TB and a corresponding increase in TB notifications among this population. Of these persons with TB, >75% came from 5 of the 7 countries (India, China, Indonesia, Bangladesh, and the Philippines) with highest incidences of TB (12,13).

The large increase in the number of TB case-patients from Indonesia, the Philippines, and Myanmar reflects the influx of migrant workers from these countries. This finding is consistent with the predominance of cases reported in foreign-born persons 20–39 years of age. The lower incidence of diabetes among these younger persons than in native-born persons is not surprising. The preponderance of lymph node involvement among the foreign-born persons merits further study.

The estimated TB rate in persons born in Singapore decreased from 49.7 cases/100,000 population to 41.8/100,000 during 2000–2007 but increased to 46.5/100,000 in 2008 and 45.2/100,000 in 2009. This increase followed the increase in cases among foreign-born persons in 2005. Transmission from foreign-born to native-born persons may have occurred, especially in increasingly crowded urban settings of Singapore. However, this proposal cannot be verified without DNA fingerprinting studies.

Currently, persons with untreated inactive lesions or scarring on their screening chest radiographs are given permission for a long-term stay in Singapore without further examination or follow-up. To improve screening, mandating sputum TB cultures may be prudent for these persons. If active disease is excluded, these persons can then receive prophylactic treatment.

A strength of this study was its nationally representative data of all TB cases reported to the STEP Registry. Electronic linkage of the Registry to the 2 mycobacterial culture laboratories in Singapore also enabled inclusion of all bacteriologically positive cases. A limitation of this study was the unavailability of data for native-born and foreign-born persons by sex and age to compare age- and sex-specific TB case rates between these 2 groups. In addition, because of the lack of population data for country of birth, we were unable to determine the TB rate by country of origin. Also, information bias is inherent in retrospective studies, and most country of birth data were based on information submitted by the notifying physician. We were also unable to analyze the association of HIV and TB because access to HIV status in our study population was limited. Our study highlights the need for measures to address TB among foreign-born persons in Singapore.

Dr Kyi Win is a clinical epidemiologist at the Singapore Tuberculosis Elimination Programme Registry, Tuberculosis Control Unit, Tan Tock Seng Hospital in Singapore. Her research interests include quantitative and qualitative studies in TB control and prevention and the molecular epidemiology of TB.