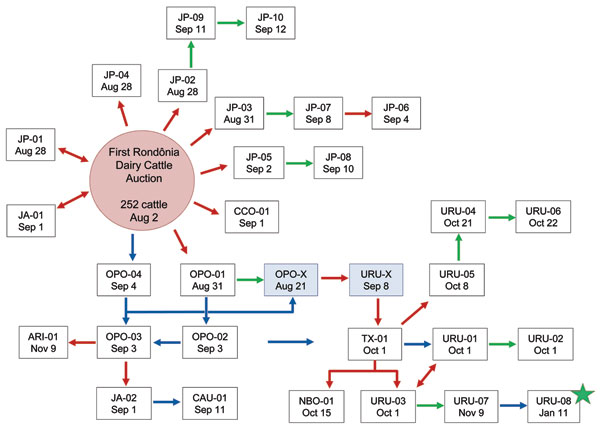 Figure 2. Spread of vaccinia virus Cantagalo (CTGV) strain infection and the epidemiologic links between affected farms in Rondônia, 2009. Two farms provided 252 cattle for the First Rondônia Dairy Cattle Auction (10°51′02.38′′S, 61°59′23.93′′W), which occurred in Ji-Paraná, Rondônia, on August 2, 2009. Eighty-one animals were sold to 6 farms; the remaining cattle were returned to their original owners. Dairy workers were hired as temporary workers for the pre-event period. Each farm affected by CTGV infection in 2009 is represented by a white box with date of disease notification to the Rondônia animal health agency indicated. The report usually happened 2–15 days after onset of clinical signs, but occasionally veterinarians were contacted after lesions had healed. Light blue boxes indicate farms whose owners did not report sick animals but which traded cattle with CTGV-affected farms or had close contact with them; the date of animal trading is shown. Epidemiologic links between farms are indicated by arrow colors (red for animal trade, blue for migration of workers, green for neighboring farms) but do not infer geographic distances. Farms were located in these municipalities: JP, Ji-Paraná; JA, Jaru; CCO, Cacoal; OPO, Ouro Preto D’Oeste; ARI, Ariquemes; CAU, Cacaulândia; TX, Teixeirópolis; NBO, Nova Brasilândia D’Oeste; URU, Urupá. Green star indicates a farm where animals showed clinical signs December 13, 2009, but the owner did not notify the state agency until January 11, 2010.