We examined small mammals as hosts for Anaplasmataceae in southern Sweden. Of 771 rodents, 68 (8.8%) were infected by Candidatus Neoehrlichia mikurensis, but no other Anaplasmataceae were found. Candidatus N. mikurensis has recently been found in human patients in Germany, Switzerland, and Sweden, which suggests that this could be an emerging pathogen in Europe.

The rickettsial family Anaplasmataceae contains several tick-transmitted bacteria of considerable medical and veterinary importance, including known human pathogens such as Anaplasma phagocytophilum and Ehrlichia chaffeensis. Recently, a case of human disease in a Swedish patient with recurrent fever episodes caused by another member of Anaplasmataceae was reported. The infectious agent was shown by PCR amplification of the 16S rRNA gene to be identical to Candidatus Neoehrlichia mikurensis (1).

This published report was followed by the description of a patient from Switzerland (2) and 2 German patients with severe febrile illness caused by Candidatus N. mikurensis (3). This member of the family Anaplasmataceae was first discovered in ticks in the Netherlands in 1999; it was originally designated as an Ehrlichia spp.–like species (4). Similar organisms were later detected in Russia (5) as well as in other parts of Europe (6). In 2004, a closely related organism was detected in Japan in wild rodents and was named Candidatus N. mikurensis (7). In the United States, a similar organism (Candidatus N. lotori) has been detected in wild raccoons (8). The distribution and reservoir hosts of Candidatus N. mikurensis in Europe are largely unknown. It has, however, been detected in a blood sample from a single bank vole in Italy (9), indicating that rodents are possible reservoir hosts.

In this study, we collected blood samples from 7 small mammal species (rodents and shrews) at 5 localities in southern Sweden to investigate their role as hosts for Anaplasmataceae to determine whether these small mammals serve as natural hosts for Candidatus N. mikurensis. 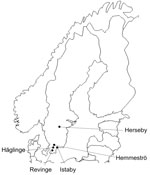 From May through October 2008, we trapped small mammals at 5 sites in southern Sweden (Figure 1). Animals were captured with live traps and released after sampling. Our primary objective was to obtain samples from bank voles, Myodes glareolus, but other species were also sampled when captured. A total of 829 animals of 7 species were caught (Table). Approximately 20 µL of blood was taken from each animal. A nested PCR was performed with primers for Anaplasmataceae specific for the 16S rRNA gene (10).

All amplified fragments were sequenced, and a BLAST (http://blast.ncbi.nlm.nih.gov/Blast.cgi) search showed that 68 animals were infected by Candidatus N. mikurensis. The primers were chosen to be specific for bacteria belonging to the families Rickettsiaceae and Anaplasmataceae (10), but they also amplified Bartonella spp. under the given PCR conditions. In total, 35.5% of the animals were infected by Bartonella spp. Double infections with both Candidatus N. mikurensis and Bartonella spp., as indicated by double peaks on the sequencing chromatogram, occurred in 12 cases.

To further characterize the obtained Candidatus N. mikurensis, we sequenced 1,426 bp of the 16S rRNA and 1,233 bp of the groEL gene (1). The obtained 16S rRNA Candidatus N. mikurensis sequences in this study were identical (1,426/1,426 bp) to sequences obtained from human patients in Germany and Switzerland (2,3). The groEL sequence was identical to the isolate from Germany (1,233/1,233 bp) but differed slightly from the isolate from Switzerland (1,072/1,084 bp, 98.9% pairwise identity). A phylogenetic network containing unique 16s rRNA sequences from Candidatus N. mikurensis available at the National Center for Biotechnology Information was made with the program Network 4.5.1.6 (www.fluxus-engineering.com) by using the median-joining algorithm (11) (Figure 2).

In the present field survey of Anaplasmataceae in Swedish rodents, we have amplified 16s rRNA and groEL sequences identified as Candidatus N. mikurensis identical to sequences obtained from humans. This organism has been amplified from humans with febrile illness on ≥4 occasions (1–3), demonstrating that Candidatus N. mikurensis can cause human infections, at least occasionally.

Apart from the first human case, to our knowledge, Candidatus N. mikurensis has not been detected in Sweden. However, we identified Candidatus N. mikurensis at 4 of 5 sites, indicating that this organism is widespread in southern Sweden. Identical or similar sequences have been detected in Ixodes ricinus ticks from several European countries (3–6,13), showing that it is distributed over a large area of Europe. In contrast, we found no evidence of infection by any other Anaplasmataceae. I. ricinus is the dominating tick species in Sweden, and animals at all our study sites were heavily infested with larvae of this species and occasionally with nymphs (M. Andersson and L. Råberg, unpub. data). Reservoir hosts are essential for several tick-borne pathogens that lack the capacity for transovarial transmission from female ticks to larvae, such as A. phagocytophilum (14). Approximately 70% of the tick larvae in Sweden engorge on small mammals, such as voles, mice, and shrews (15).

We conclude that Candidatus N. mikurensis is geographically widespread in southern Sweden and that several rodent species, the main source of blood meals for larvae of I. ricinus in Sweden (15), can be infected. The relatively high prevalence in common rodent species suggests that the risk for humans and domestic animals to encounter infected I. ricinus nymphs and adults is substantial. Thus, Candidatus N. mikurensis should be considered when diagnosing bacterial infections associated with tick bites.

Mr Andersson is a PhD student in the Department of Biology, Lund University. His major research interests focus on the ecology and evolution of tick-borne diseases.

Dr Råberg is an assistant professor in the Department of Biology, Lund University. His research interest focuses on the evolutionary ecology of host-parasite interactions.