After 2 children in North America were confirmed to have pandemic (H1N1) 2009 infections on April 17, 2009 (1), the virus rapidly spread throughout the world. By July 2, 2009, Southeast Asia had reported 1,866 cases (2). Officials worried about the effects of pandemic (H1N1) 2009 on the 147,030,000 million population (1,021 persons/km2) of Bangladesh (3), where 41% of children <5 years of age are underweight (4). These concerns prompted Bangladesh to leverage 3 existing surveillance systems (5), preparedness plans, and personal protective equipment and oseltamivir stockpiles to guide the response to the pandemic. 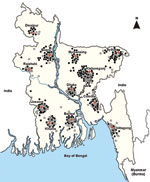 During 2007, Bangladesh started event-based surveillance for the early detection of public health events of international concern. At 6 government and 6 private hospitals (Figure 1), physicians identified >2 epidemiologically linked severe acute respiratory infections, defined as subjective fever within the past 21 days and cough or sore throat (5), or severe pneumonia, defined as cough or difficulty breathing, chest in-drawing, stridor while calm, convulsions, inability to drink, lethargy, unconsciousness, or intractable vomiting. During April through November 2009, staff also administered ≈455,000 questionnaires to incoming land and air passengers, contacts, and referrals and collected throat and nasal swab specimens from those who reported cough, sore throat, or shortness of breath and had fever >38°C when assessed with thermal scanners.

Laboratorians tested samples from the 3 surveillance systems for pandemic (H1N1) 2009 virus by using real-time reverse transcription PCR (7). Investigators shipped a convenience subset of 28 virus samples to the Centers for Disease Control and Prevention, Atlanta, for antiviral testing and strain characterization.

Figure 2. Date of onset of confirmed illness in case-patients with pandemic (H1N1) 2009 by surveillance platform, May 2009–October 2010, Bangladesh.

During June 2009–October, 2010, Bangladesh tested ≈500 passengers, 6 severe acute respiratory infection/severe pneumonia clusters, 5,000 persons identified by sentinel survelliance, and 6,000 persons identified by community-based survelliance and identified 1,371 laboratory-confirmed cases of pandemic (H1N1) 2009 infection (Table 1). During June–July 2009, most (29/30 [97%]) case-patients were identified through event-based surveillance; 17 (63%) were travelers. A rapid increase in the number of sentinel-site case-patients during July 2009 signaled the spread of pandemic (H1N1) 2009 to the general population (Figure 2).

Integration of 3 influenza surveillance systems facilitated response. To delay the spread of the pandemic virus in the general population, Bangladesh used event-based surveillance to identify and treat infected travelers. When sentinel-sites signaled pandemic (H1N1) 2009 among the general population, the government distributed 3.4 million capsules of oseltamivir to hospitals, trained hospital leadership to presumptively treat case-patients with free oseltamivir, and mounted a risk-communication campaign to urge persons at risk for complications to seek care within 3 days of illness development. Officials targeted messages to avoid overwhelming Bangladesh’s hospitals, where there are typically 11 hospitalized patients for every 10 beds (8). Meanwhile, officials continued to learn about the epidemiology of pandemic (H1N1) 2009 through population-based surveillance.

Despite government efforts, case-patients sought treatment late, and oseltamivir was underutilized. Less than half (42%) of high-risk patients sought care within 48 hours of disease onset, when oseltamivir is most efficacious. As in other studies (9), even severely ill persons who subsequently died were late in seeking treatment. Ill persons frequently were unfamiliar with risk communication messages and may have avoided the expense of seeking treatment. During 2009, only 34% of surveyed households recalled risk communication messages, none could identify oseltamivir (10), and those with a history of influenza-like illness paid an average of US $3 when seeking care (i.e., 9% of monthly household expenditure) (11).

While the government of Bangladesh provided initial case-patients with oseltamivir, community clinicians provided oseltamivir once pandemic (H1N1) 2009 had spread to the general population. Only a fraction of eligible case-patients then received oseltamivir. Possible explanations for the underutilization of oseltamivir include clinicians’ lack of suspicion of influenza, awareness of treatment guidelines, familiarity with antiviral agents, access to oseltamivir stockpiles, or knowledge of the potential severity of pandemic virus.

Our findings are based on a small case series. Although we identified only 28 decedents, an ongoing study suggests that ≈6,000 persons died as a result of the pandemic (12). Nevertheless, we believe that our findings are generalizable to Bangladesh because hospitals were selected as sentinel sites to provide geographically representative data.

Bangladesh has an effective surveillance system in place for detection of emerging infectious diseases. In spite of timely surveillance, prompt risk communications and free oseltamivir, response may have been hampered by persons’ delays in seeking treatment and by the underutilization of oseltamivir. Our investigation suggests the utility of diverse surveillance systems, the limitations of antiviral drug campaigns, and the importance of influenza prevention through vaccines (e.g., 15 million pandemic [H1N1] 2009 vaccine doses donated to Bangladesh during 2010) and nonpharmaceutical interventions. Such campaigns remain insufficiently used in low-income countries where vaccines are expensive, access to clean water is inadequate, and covering a cough is not customary (13,14).

Dr Azziz-Baumgartner was head of the Influenza Cluster at International Centre for Diarrhoeal Diseases Research, Bangladesh. He currently works at the US Centers for Disease Control, Influenza Division, collaborating with the Pan American Health Organization and its member countries. His research interests are surveillance improvements, disease and economic burden studies, and influenza vaccine impact studies.

The International Centre for Diarrheal Disease Research, Bangladesh, acknowledges with gratitude the commitment of the Centers for Disease Control and Prevention to its research. We also acknowledge the contributions of Dorothy Southern, Jo Grzelinska, Mohammad Inamul Shahriar, Sumona Liza, Nancy Cox, Carolyn Bridges, Ann Moen, Karen Siener, and the field, laboratory, and clinical staff who participated in pandemic response. A special thanks is given to Richard Cash for asking difficult questions.

This study was supported by the Centers for Disease Control and Prevention, grant no. U01/CI000628-02.