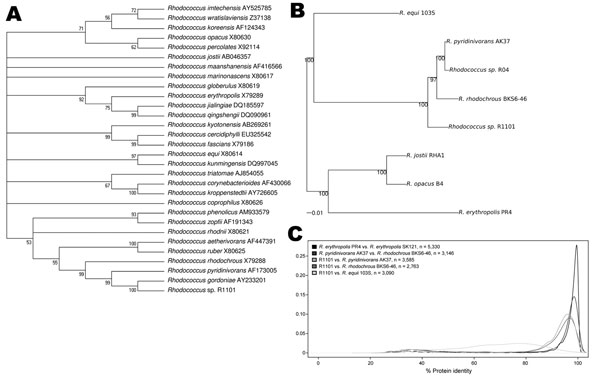 Figure. . . Phylogenetic and proteomic comparison of isolate R1101 and Rhodococcus spp. strains. A) 16S rRNA–based phylogenetic analysis. Complete or partial 16S rRNA gene sequences for 29 Rhodococcus spp. type strains were aligned with complete sequence of 16S rRNA gene for isolate R1101. GenBank accession numbers are provided. B) Genome-wide phylogenetic analysis. A sample of 67 protein-coding genes shared among genomes of isolate R1101 and 6 Rhodococcus spp. strains were analyzed. Scale bar indicates 0.01 nt substitutions per site. C) Genome-wide comparative proteome analysis. Density distributions of amino acid identity between homologous proteins from pairs of Rhodococcus strains are shown. The density distribution curves for R1101 show that R1101 is closely related, but not identical to, R. pyridinivorans (orange curve) and R. rhodochrous (red curve) at the protein level; R1101 is less closely related to R. pyridinivorans AK37 and R. rhodochrous than these 2 species are related to each other; and R1101 is most distantly related to R. equi (green curve).

Page created: October 11, 2012
Page updated: October 11, 2012
Page reviewed: October 11, 2012
The conclusions, findings, and opinions expressed by authors contributing to this journal do not necessarily reflect the official position of the U.S. Department of Health and Human Services, the Public Health Service, the Centers for Disease Control and Prevention, or the authors' affiliated institutions. Use of trade names is for identification only and does not imply endorsement by any of the groups named above.