Arctic/Arctic-like rabies virus group 2 spread into Bangladesh ≈32 years ago. Because rabies is endemic to and a major public health problem in this country, we characterized this virus group. Its glycoprotein has 3 potential N-glycosylation sites that affect viral pathogenesis. Diversity of rabies virus might have public health implications in Bangladesh.

Rabies virus causes severe encephalitis in a wide range of mammals, including humans. Conservative estimates suggest that 55,000 persons worldwide die of rabies each year (1). Although the case-fatality rate in humans is 100%, rabies is preventable by vaccination. Bangladesh has the world’s third highest death rate for human rabies, an estimated 2,100 deaths per year (2). Dogs are the main reservoir of the virus and are responsible for spillover infections in humans (2). Therefore, dogs should be the principal target for successful rabies elimination.

With political will and solid global epidemiologic information, rabies elimination is possible. Molecular typing of circulating rabies viruses is necessary to identify and develop effective control measures, and to understand the spread of certain rabies virus variants and their incursion into new regions (3). For rabies elimination, this knowledge is needed for establishing cooperative approaches between neighboring countries to which the disease is endemic.

Seven brain samples were collected from animals with suspected rabies in 3 districts of Bangladesh (Dhaka, Narayanganj, and Narshingdi) in 2010 (Table 1). A portion of brainstem was removed from each sample and preserved in TRizol (Invitrogen, Carlsbad, CA, USA) at –20°C. Total RNA was extracted from brain homogenate, cDNA was synthesized by using random hexamer primers, reverse transcription PCR was conducted to amplify gene fragments, and nucleotide sequencing of genes was performed (4).

Evolutionary analysis was performed by using full-length N gene. We created a maximum clade credibility phylogenetic tree using the Bayesian Markov chain Monte Carlo method available in BEAST version 1.6.1 (5). Analysis was conducted by using a relaxed (uncorrelated lognormal) molecular clock and a generalized time reversible + Γ + proportion invariant model (6). All chains were run for 90 million generations and sampled every 3,000 steps and an effective sample size >1,383 was obtained for all estimated parameters. Posterior densities were calculated with 10% burn-in and checked for convergence by using Tracer version 1.5 in BEAST.

The mean rate of nucleotide substitution estimated for the N gene was 2.3 × 104 substitutions/site/year (95% highest posterior density [HPD] 1.4–3.1 × 104 substitutions/site/year). This rate is consistent with that of a previous study (7). The phylogenetic tree showed that rabies viruses in Bangladesh belong to Arctic/Arctic-like group 2 (AAL2) (3) also known as Arctic-like-1 (8), in close association with the strain from Bhutan.

Compared with the AAL2 strain from India (AY956319), BDR5 had several amino acid substitutions (Table 2). Sizes of their 2 genomes, leader RNA, trailer RNA, and intergenic regions were similar. The N-glycosylation site was predicted by using the NetNGlyc 1.0 server (www.cbs.dtu.dk/server/netnglyc). With the exception of BDR6, the G gene of all strains had potential glycosylation sites at position 37, 146, and 319.

Genetic analysis and phylogenetic studies can contribute to understanding the epidemiology of rabies virus in disease-endemic countries. Molecular analysis of animal rabies viruses showed that AAL2 appeared in central Bangladesh only 32 years ago. A close association between N genes sequences from rabies viruses in Bangladesh and Bhutan indicates that they originated from a common ancestor. If one considers the ease of human movement between countries, AAL2 most likely entered Bangladesh from India rather than from Bhutan. 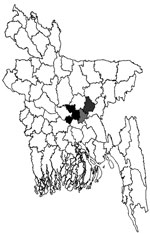 Circumstantial evidence suggests that rabies virus spread from India to Bhutan (9). AAL2 circulates in many states of India. It has spread into southern India and has replaced older strains (10,11). It is likely that AAL2 is also circulating in states of India that are between Bhutan and Bangladesh. Estimated time of AAL2 spread is based on 7 samples that are representative of central Bangladesh (Figure 2). Therefore, further surveillance might identify the extent to which AAL2 has spread and the diversity of rabies viruses in other parts of Bangladesh that might alter the estimated date of spread. It has been reported that arctic rabies virus and other variants can co-circulate in the same region (12).

AAL viruses could have moved southward from Siberia or other northern regions of the former Soviet Union into Nepal, India, and other countries in Asia by a species jump from fox to dog at some point (3). Another possibility is that AAL viruses first emerged in dogs in southern Asia and subsequently spread to northern climes, where they are now maintained in fox populations (3,8). Extensive surveillance of viruses from Iran, Iraq, Afghanistan, and countries north of them is necessary to determine the origin and spread pattern of AAL rabies virus.

The timeline of divergence of different lineages determined in this study was similar to that previously reported (8). That study and our study used the full-length N gene to determine the time of divergence. Another study reported the timeline of divergence as a more recent event (14). This study used partial sequences of N genes, which might be responsible for different results. Rabies virus from Nepal also belongs to AAL2, and as reported in a previous study (15), seemed to be forming a different lineage. However, the speculation was not supported by a significant a posterior density value (0.6355). Thus, a network of countries is urgently needed to exchange information on molecular typing of circulating strains of rabies virus that might be useful in controlling rabies in this region.

Dr Jamil is a physician and virologist in the Department of Virology, Institute of Epidemiology, Disease Control, and Research, Dhaka, Bangladesh. Her research interests are virology and molecular epidemiology of rabies virus.

This study was supported in part by a Grant-in-Aid Scientific Research B from the Japan Society for the Promotion of Sciences (grant 20406026) and the Research Fund at the Discretion of the President, Oita University (grant 610000-N5010).