Methicillin-resistant Staphylocoocus aureus (MRSA) harboring mecALGA251 has been isolated from humans and ruminants. Database screening identified this MRSA variant in cats, dogs, and a guinea pig in Germany during 2008–2011. The novel MRSA variant is not restricted to ruminants or humans, and contact with companion animals might pose a zoonotic risk.

Worldwide, methicillin-resistant Staphylococcus aureus (MRSA) is a leading cause of infectious diseases in humans and animals (1). The staphylococcal cassette chromosome mec (SCCmec) harbors the mecA gene, which encodes an additional penicillin-binding protein 2a. In the presence of β-lactam antimicrobial drugs, this transpeptidase substitutes an essential cross-linking step in the process of cell-wall building (2). Eleven distinct SCCmec elements have been described (3). Recent reports of MRSA carrying a novel mecA homologue (mecALGA251) of a predicted amino acid identity of 62% with other mecA allotypes raised awareness about these pathogens, which possibly remain undetected by conventional PCR approaches (3–5). This lack of detection might have led to underestimation of the novel MRSA variant among clinical samples of human and animal origin.

High-level congruence between S. aureus of animal and human lineages has been demonstrated (6), and nearly every sequence type (ST) reported for MRSA associated with infections in companion animals was also commonly found in humans (1). Because previous reports indicated that MRSA harboring mecALGA251 originated from either human or ruminant hosts (3–5), we searched our database for companion animal isolates that displayed a MRSA phenotype but had failed to give a positive PCR result for mecA.

From November 2008 through December 2011, MRSA of companion animal origin was routinely isolated from specimens submitted for diagnostic purposes to Vet Med Labor GmbH in Ludwigsburg, Germany, or to the Institute of Microbiology and Epizootics, Freie Universität Berlin, in Berlin, Germany. S. aureus was confirmed as described (7) and stored in glycerol stocks at −80°C.

The presence of the mecA homologue was verified for all 10 isolates. All PCR amplicons demonstrated 100% identity with the DNA sequence of mecALGA251 (National Center for Biotechnology Information no. FR821779.1). The strains originated from geographically diverse areas (5 federal states of Germany) and were isolated from different infection sites (Table). All strains were identified as MRSA by the VITEK 2 system (growth in the presence of 6 μg/mL cefoxitin according to the VITEK 2 Advanced Expert System), although oxacillin MICs were rather low (0.5 μg/mL) or moderately high (≥4 μg/mL) (Table). Phenotypic resistance toward non–β-lactams was not detected. 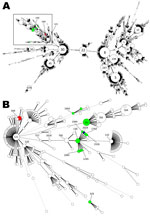 Figure. . Minimum spanning tree based on multilocus sequence typing data from 4,197 Staphylococcus aureus strains (A) and an enlarged view of 1 phylogenetic group (B). Each circle represents a distinct sequence...

As has been described for atypical MRSA, 4 strains belonged to ST130 and 1 strain belonged to ST1945 (differs from ST130 by 1 allele) (3–5). The remaining 5 isolates were assigned to ST599 (differs from ST121 by 2 alleles) (Table). ST599 has been reported for methicillin-susceptible isolates from humans in Europe, Asia, and Africa (www.mlst.net). The Figure shows a minimum spanning tree based on 4,197 entries of the S. aureus multilocus sequence type database (http://saureus.mlst.net/) as of January 19, 2012 (Figure, panel A) and a detailed view of the branches and STs harboring strains with the novel mecA homologue published (Figure, panel B) (3–5).

Microarray hybridization data revealed that the agr type I and capsule type 5 seem to be associated with ST599 and agrIII and that clonal complex (CC) 130 isolates harbor the capsule type 8 encoding gene. CC130 and ST599 isolates were positive for the surface-associated proteins clfA, clfB, fnbA, and bbp. All ST599 strains produced a positive hybridization result for 1 of the gene variants encoding the toxin responsible for toxic shock syndrome (tst1 or tst-bov), and all but 1 of them harbored the enterotoxins C (sec) and L (sel), indicating the presence of an S. aureus pathogenicity island that encodes superantigens (13). Positive or ambiguous hybridization signals for ccrB1, ccrA3, and ccrB3 were obtained for 5 isolates, suggesting the presence of the SCCmecXI in those strains, according to the results of Shore et al. (4).

Our findings of CC130 and ST599 MRSA harboring mecALGA251 in several companion animal species suggest that in Germany, the presence of the mecA homologue in MRSA is not exclusively associated with CC130. This finding supports the hypothesis that some, if not all, MRSA strains that harbor the novel mecA variant can cause infections among a broad variety of hosts, as has been shown for MRSA of human, equine, canine, and other companion animal origins (1,7). All currently known mecALGA251–carrying MRSA were observed in a distinct section of the S. aureus population (Figure, panel B). Whether this phylogenetic group possesses the ability to integrate the novel mecA variant needs to be further investigated.

In the past, mecALGA251–carrying MRSA could have been misidentified as methicillin sensitive by routine PCR. However, all isolates were correctly identified as MRSA by the VITEK 2 system, as reported (4).

Of the 10 isolates, 7 were found in specimens from cats. A recent study identified cats as a potential natural reservoir for S. aureus of CC133, a genetic lineage that has also been reported for S. aureus of ruminant origin (14). Moreover, we have identified a CC130 strain (MSSA_ST2024, t8403) from a wild rat (IMT21250; ID4035) (www.mlst.net). In addition, CC130 MRSA containing the mecA homologue has only recently been reported for isolates from humans in Germany (5).

Although many investigators focus on livestock-associated MRSA, and because particular companion animal lineages of MRSA seem to be lacking, transmission of MRSA between companion animals and human family members in close proximity might be underestimated, especially in cases of recurrent infection (15). The emergence of MRSA harboring the novel mecA homologue has consequences for the verification methods for MRSA used in veterinary medicine; implementation of new methods will be inevitable. Their supposed restriction to only a few genetic lineages and the potential risk for interspecies transmission of atypical MRSA between companion animals and their owners in household environments needs further elucidation.

Dr Walther is a veterinarian holding a postdoctoral position at the Institute of Microbiology and Epizootics in the Infectious Disease Diagnostics and Molecular Epidemiology Working Group. Her primary research interests focus on molecular epidemiology of MRSA and methicillin-resistant S. pseudintermedius in companion animals.

We thank Christel Simon and Sylwia Marquardt for their excellent technical assistance and Matthias Stange and Mario Heising for help with rat sampling.

This work was conducted at the Freie Universität Berlin, Institute of Microbiology and Epizootics and Vet Med Labor GmbH, Ludwigsburg, Germany. It was supported by grants of the German Federal Ministry of Education and Research, MedVet-Staph grant no. 01KI1014F and FBI-Zoo grant no. 01KI1012A, and by the German Research Foundation, GRK1673. The funders had no role in study design, data collection and analysis, decision to publish, or preparation of the manuscript.