To confirm whether respiratory virus infections increase susceptibility to invasive pneumococcal pneumonia, we examined data from 11 influenza seasons (1994–2005) in the United States. Invasive pneumococcal pneumonia was significantly associated with influenza and respiratory syncytial virus activities in 5 seasons. Association strength was higher when strain H3N2 was the predominant influenza A virus strain.

Invasive pneumococcal pneumonia (IPP) diseases cause high rates of illness and death every year. Existing evidence supports the biological plausibility that preceding respiratory viral infections, particularly with influenza virus and respiratory syncytial virus (RSV), increase susceptibility to IPP diseases (1). Although it has been generally believed that the increases in IPP diseases in winter relate to increased activity of respiratory viruses, especially influenza virus and RSV (2–6), evidence of association of IPP diseases and respiratory virus infections is not conclusive. If such an association is likely, then public health authorities should emphasize that vaccination against influenza, as well as other interventions against influenza and RSV, can reduce incidence of IPP diseases. We believe that cold temperatures, lack of sunshine, and rainy and snowy weather are the main reasons that persons increase their indoor activities during the winter and that respiratory diseases are mainly transmitted by close person-to-person contact (5,7,8). Therefore, we conducted separate analyses of the association of IPP with seasonal influenza virus and RSV activities, adjusted by climate variables, for each of 11 influenza seasons from 1994–95 through 2004–05.

All data used in this study were recorded for each influenza season (surveillance weeks 40–20) from 1994–95 through 2004–05. Weekly IPP cases were obtained from the Active Bacterial Core Surveillance for Georgia Health District 3. Cases of IPP were defined by isolation of Streptococcus pneumoniae from normally sterile sites, e.g., cerebrospinal fluid or blood. Only IPP case-patients (defined as persons with S. pneumoniae isolated from pleural fluid or persons with a clinical diagnosis of pneumonia and S. pneumoniae isolated from blood or another sterile body site) were included in this study. Influenza virus surveillance data were obtained from the World Health Organization. Weekly data were collected from each state from October through May of each influenza season. The influenza virus–positive isolate percent was defined as the percentage of influenza virus–positive isolates out of all influenza specimens. Percentages of isolates positive for influenza A (H1N1), A (H3N2), and B viruses were also calculated.

Weekly RSV data were obtained from the National Respiratory and Enteric Virus Surveillance System (www.cdc.gov/surveillance/nrevss/). For each season, hospitals and laboratories reported to the Centers for Disease Control and Prevention the numbers of specimens tested for RSV by antigen detection each week. The RSV detection percent was defined as the percentage of RSV-positive isolates out of all RSV specimens. The influenza virus and RSV data used in this study were from the US Census South Atlantic Region (www.census.gov/geo/www/us_regdiv.pdf). Data on daily mean temperature (in oF), total sunshine (in hours), and total precipitation (in inches) were obtained from the National Weather Service Atlanta regional weather center at Hartsfield-Jackson International Airport (9). The weekly mean temperature, total sunshine, and total precipitation were calculated from daily data.

For each of the 11 influenza seasons, we applied negative binomial regression models with multiple predictors to relate the weekly IPP rates with the indicators of influenza and RSV activities while adjusting for the weekly mean temperature, total sunshine, and total precipitation. The full model used to explore the association of IPP with influenza and RSV was as follows:

where for week t, Yt is the incidence of IPP, Xt is the influenza virus–positive isolate percent, Zt is the RSV detections percent, Wt is the mean temperature, Ut is the total sunshine, Vt is the total precipitation, and Nt is the population size. The reduced model excluded the influenza and RSV terms. We calculated the difference in the log-likelihood ratio statistic between the full and reduced models and used it to test the hypothesis that IPP incidence is not associated with influenza and RSV activities when weekly temperature, sunshine, and precipitation were adjusted for.

For influenza seasons 1994–95 through 2004–05, the average annual incidence of IPP was 19.78 per 10 million persons (Table 1). Table 1 also shows the means of total number of IPP cases; influenza-positive isolates; RSV detections; and the average temperature, sunshine, and precipitation for each of these influenza seasons. 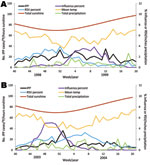 To demonstrate the association of IPP incidence with influenza virus and RSV activities and the climate data, we displayed the weekly IPP, influenza virus, RSV, temperature, sunshine, and precipitation data for seasons 1998–99 and 2003/04 (Figure). Similar figures for the other 9 seasons can be found in the Technical Appendix.

To explore the temporal variability in the association of IPP incidence with influenza virus and RSV activities over a long period, we conducted a season-by-season analysis over 11 influenza seasons. We adjusted the association of IPP with influenza virus and RSV by temperature, precipitation, and sunshine because these factors are believed to be associated with pneumococcal and viral respiratory infections (5,7,8).

In summary, in this season-by-season analysis, we found substantial variation in the strength of the association of IPP incidence with influenza virus and RSV activities across seasons. We also found that this association may be associated with the predominant influenza virus strain. More studies, using data from more seasons and from several geographic areas, are needed to better explain the variation in the association between invasive pneumococcal diseases and respiratory viral infections.

Ms Zhou was an MPH student in biostatistics at Emory University at the time of this study. Her research interests include infectious disease research.

Page created: January 25, 2012
Page updated: January 25, 2012
Page reviewed: January 25, 2012
The conclusions, findings, and opinions expressed by authors contributing to this journal do not necessarily reflect the official position of the U.S. Department of Health and Human Services, the Public Health Service, the Centers for Disease Control and Prevention, or the authors' affiliated institutions. Use of trade names is for identification only and does not imply endorsement by any of the groups named above.