We investigated an outbreak of non-O157 Shiga toxin–producing Escherichia coli at a high school in Minnesota, USA, in November 2010. Consuming undercooked venison and not washing hands after handling raw venison were associated with illness. E. coli O103:H2 and non-Shiga toxin–producing E. coli O145:NM were isolated from ill students and venison.

Non-O157 Shiga toxin–producing Escherichia coli (STEC) are emerging pathogens (1,2) but are underrecognized because relatively few clinical laboratories routinely use culture-independent testing methods necessary for their identification (3,4). Ruminants (e.g., cattle, goats) can be colonized by non-O157 STEC and are reservoirs of these organisms. Non-O157 STEC outbreaks have been associated with contaminated food and recreational water and with direct contact with infected animals or humans (2,4,5). However, much is still unknown about sources and risk factors for non-O157 STEC infection.

On December 1, 2010, the Minnesota Department of Health (MDH) was notified that 2 students from the same high school were hospitalized with bloody diarrhea. As part of a physical education/environmental science class, 7 white-tailed deer (Odocoileus virginianus) had been processed on school grounds on November 16, and venison kabobs were grilled and consumed in class on November 23.

MDH and Minnesota Department of Agriculture (MDA) staff interviewed the course instructor and the butcher who processed the deer. The school provided names and contact information for students enrolled in the class. A case–control study was conducted; students were interviewed about illness, food consumption, and venison handling in class. A case-patient was defined as a class enrollee in whom diarrhea (>3 loose stools in 24 hours) developed after November 16 and lasted >3 days. Diarrhea duration was included in the case definition to exclude possible background norovirus infections.

Stool specimens from 6 students were submitted to MDH. Specimens were tested for E. coli O157 and Salmonella, Shigella, Yersinia, and Campylobacter spp. by culture and for norovirus genogroups I and II by PCR. Non-O157 STEC testing was conducted by using sweep PCR for Shiga toxin genes (stx1 and stx2), hlyA, and eaeA (6) and by culture using immunomagnetic separation.

If Shiga toxin genes were detected by sweep PCR but not in isolated colonies, hlyA- and eaeA-positive colonies were serotyped. Leftover raw venison was tested at MDA for STEC by PCR for stx1, stx2, and uidA; by immunomagnetic separation for STEC O103; and by O145 isolation (7). SAS software version 9.2 (SAS Institute, Cary, NC, USA) was used for analyses. p <0.05 was considered significant.

Of 225 students from 5 class periods, 117 (52%) were interviewed. Twenty-nine case-patients (25%) were identified. Twenty additional students reported gastrointestinal symptoms that did not meet the case definition and were excluded from analysis. Twenty (69%) case-patients were male. Median incubation from the November 23 class date for 28 case-patients with illness onset after that class was 53.5 hours (range 22–121 hours) (Figure 1). All 29 case-patients reported diarrhea, 21 (72%) reported cramps, 5 (17%) vomiting, 5 (17%) bloody stools, and 2 (7%) fever. Median duration of illness was 5 days (range 4–12 days). Two case-patients were hospitalized for 2 and 3 days, respectively. No case-patients showed development of hemolytic uremic syndrome and none died. 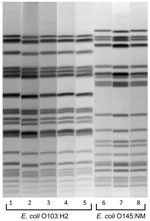 Six deer were shot and field dressed during November 12–14. A seventh deer was obtained after being hit by a vehicle. Students brought the deer to the school where they were stored in a shed packed in ice. On November 16, a butcher processed each deer by using tools that had never been used to butcher domestic ruminants. Tables, cutting boards, and tools were reportedly cleaned with a 10% bleach solution. Venison was wrapped in plastic, covered in ice, and stored overnight in the shed.

On November 17, students cut selected pieces of meat into cubes, which was wrapped in butcher paper and frozen. Remaining large cuts were returned to students who had provided deer. Students could have received venison from any of the 7 deer. On November 22, the venison was thawed and marinated in 5-gallon buckets. On November 23, several students used wooden bamboo skewers to assemble venison kabobs. The kabobs were grilled by several students on a gas grill for consumption during each class period. Students were instructed to wear gloves and wash their hands after handling raw venison on November 17, 22, and 23.

In the case–control study, consuming undercooked or pink venison was associated with illness (Table 2). Among students who handled raw venison or helped clean up on November 23, students who reported handwashing afterwards were less likely to become ill. Numerous students reported instances of potential cross-contamination or other food handling errors, including using the same plate for raw and cooked venison, using the same tongs to handle raw and cooked venison, and not washing hands after bare-hand contact with raw venison.

This outbreak of non-O157 STEC was associated with handling and consumption of venison from wild white-tailed deer in a high school class. Venison butchered at the school was positive for the outbreak PFGE subtype of STEC O103:H2 and non-Shiga toxin–producing (stx–) E. coli O145:NM.

The role of stx– E. coli O145:NM is unknown. Although E. coli O145:NM strains isolated from patients 3 and 4 and venison were stx–, other virulence factors, clinical illness, and an enterohemorrhagic E. coli serotype suggest a potentially pathogenic strain. Human infections with stx– E. coli serotypes may cause bloody diarrhea and hemolytic uremic syndrome (8). Further characterization of virulence determinants and phylogeny of these strains may shed light on their pathogenicity.

Multiple potential routes of transmission from venison to case-patients were identified, included consumption of venison and cross-contamination from raw to cooked venison. Handwashing after touching raw venison or contaminated surfaces was protective. Interviews with the butcher ruled out cross-contamination from domestic ruminants to venison during butchering. Therefore, we conclude that >1 deer were colonized with non-O157 STEC.

A study of white-tailed deer feces in Minnesota and Wisconsin found non-O157 STEC in 5% of samples (9). Studies have found non-O157 STEC contamination of deer meat ranging from 7.5% of roe deer meat in Germany to 22% of fallow deer meat in Belgium (5). Prevalence rates of E. coli O157 in deer have ranged from 0.25% to 2.4% (10–12). Previous outbreak investigations and case reports have linked E. coli O157 infections to deer (13–15). This outbreak indicates that white-tailed deer are a source of human non-O157 STEC infections. Venison should be handled and cooked with the same caution recommended for other meats.

Mr Rounds is an epidemiologist with the Minnesota Department of Health. His research interests include improving foodborne disease outbreak investigations and disease control efforts.

Page created: January 11, 2012
Page updated: January 11, 2012
Page reviewed: January 11, 2012
The conclusions, findings, and opinions expressed by authors contributing to this journal do not necessarily reflect the official position of the U.S. Department of Health and Human Services, the Public Health Service, the Centers for Disease Control and Prevention, or the authors' affiliated institutions. Use of trade names is for identification only and does not imply endorsement by any of the groups named above.