Poultry Culling and Campylobacteriosis Reduction among Humans, the Netherlands

In the Netherlands in 2003, an outbreak of avian influenza in poultry resulted in extensive culling, especially of layer hens. Concurrently, human campylobacteriosis cases decreased, particularly in the culling area. These observations raise the hypothesis that Campylobacter spp. dissemination from poultry farms or slaughterhouses might contribute to human campylobacteriosis.

In the Netherlands during March–May 2003, an outbreak of avian influenza (H7N7) virus among poultry led to the culling of >30 million birds (1). The outbreak, and thus the culling, was confined to a relatively small area of 50 × 30 km in the center of the country (2). A few years after the avian influenza outbreak, it became apparent that the incidence of campylobacteriosis among humans had decreased during 2003 and that the extent of this decrease varied by region. Because the avian influenza outbreak strongly affected the poultry industry in 2003, a link was suspected.

In the Netherlands, the laboratory surveillance network for gastroenteric pathogens was started in 1987 and now consists of 15 regional public health laboratories. In April 1995, Campylobacter spp. were included in surveillance. Each laboratory reported the number of all first isolates of pathogens weekly to the Department of Epidemiology and Surveillance at the National Institute for Public Health and the Environment (RIVM). For 2002 through 2004, prospective weekly estimates of the expected frequency of campylobacteriosis cases and 99.5% tolerance levels were calculated by using the Farrington algorithm, based on weekly surveillance data for the preceding 5 years, and linear interpolation of the observed frequencies per year (1995–2008) (3,4). Incidence rates were calculated by taking the area covered by the surveillance network into account (4). 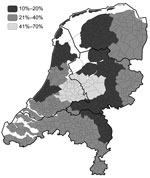 Figure 1. Regional reduction of campylobacteriosis (March–December 2003) following the Public Health Laboratory regions borders in the Netherlands, with the outlines of the 4 clusters of provinces. 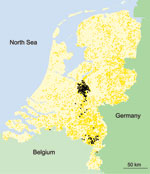 Figure A1. Weekly number of cases of campylobacteriosis among humans, the Netherlands, 2002–2004.

In March 2003, a 30% reduction of reported campylobacteriosis cases in the Netherlands was noted. In December 2003, a 19% reduction was noted (Figure A1). From March through December 2003, levels of reduction varied markedly among public health laboratories, 10%–70%; the largest reduction occurred in the central region of the country, where the culling took place (Figure 1, Figure 2) (2). Overall, the percentages of cases reported by the laboratories in culling areas were 44%–50% less than expected during May–December 2003.

In the poultry culling area, 1 large slaughterhouse (2 locations) and 1 smaller slaughterhouse, which together accounted for 15% of the national slaughter capacity for broiler chickens, had to be closed during the culling (March–June). Information about poultry purchases was gathered through registration of the food products bought by and interviews with a random sample of 6,000 households, comprising ≈13,400 persons, by GfK Panel Services Benelux (Dongen, the Netherlands) (5). The Product Boards for Livestock, Meat and Eggs provided sales data for poultry meat on the national level and stratified by 4 regions.

Comparison of broiler meat purchases during 2002–2003 (Table) indicated a national reduction in sales during March–October 2003; the reduction was greatest during May–June (−9%). The regional reduction never exceeded –12% and was largest in areas roughly overlapping or near the culling area. By 2004, sales had returned to normal (85,165 kg, data not shown).

Consumption of poultry and direct contact with poultry are generally accepted as dominant risk factors for sporadic Campylobacter spp. infections among humans (6,7). In the Netherlands, the strongest reduction in campylobacteriosis cases occurred in the laboratory service areas overlapping the culling area and the areas where the slaughterhouses were closed. Also, sales of poultry meat dropped most in these areas, although not proportional to the reduction in campylobacteriosis, and recovered quickly after June; the reduction in campylobacteriosis occurred at least up to the end of the year. Moreover, culling was mainly among layer hens (54%) and only 8% among broilers. In the Netherlands, meat from spent hens (layer hens that are no longer economically productive) is not consumed as fresh meat.

Environmental pathways of human Campylobacter spp. infection remain less understood (7) and might play a major role in rural areas (8,9). These pathways remain to be clarified, although some studies have implicated aerosols and flies as vectors for environmental transmission (10–12). Campylobacter spp. have been detected in the air up to 30 m downwind of and in puddles near broiler houses (13). A US study among chicken catchers and poultry plant workers at 1 plant found colonization with Campylobacter spp. among 41% and 63% of these persons, respectively (14). Surprisingly, 9 community members who lived near, but did not work at, the US plant had positive Campylobacter spp. test results.

In Belgium in 1999, the availability of poultry meat was greatly reduced because of dioxin-contaminated feed components (15). All poultry meat and eggs from Belgium were withdrawn from the market, which resulted in a 40% decrease in campylobacteriosis cases for 2 weeks after the withdrawal. Two weeks after sale of these products resumed, incidence returned to previous rates, although poultry production took 7 weeks longer to regain levels similar to those of the year before. In the Netherlands, the reduction in campylobacteriosis cases lasted longer. The situations in the Netherlands and Belgium also differed at other points. In the Netherlands, culling was conducted in a relatively small area, at farms under strict biosecurity measures, and was followed by intensive cleaning and disinfection of the farms and an extended period when farms were empty. In Belgium, the poultry came from farms throughout the country and were slaughtered according to routine procedures before disposal of carcasses or processed meat. Furthermore, in the Netherlands, sales of broiler meat decreased by <12%, whereas in Belgium, 100% of broiler meat was withdrawn from the market.

In this retrospective study, measures of environmental dissemination of Campylobacter spp. were lacking. The use of aggregated data makes it impossible to prove a causal link between the culling of poultry and the decrease in campylobacteriosis incidence. Nevertheless, on the basis of the combined information, we hypothesize a relationship between the reduced environmental contamination by poultry farms and slaughterhouses and the reduced number of campylobacteriosis cases in humans in the same region. Because slaughterhouses were closed and disinfected farms were empty or closed for everyone except attendants under strict hygiene measures, a temporal, lower environmental load of Campylobacter spp. was probably achieved. We are not aware of any other events in this period that might explain the regional and temporary decrease in campylobacteriosis incidence. However, unobserved effects, such as improved kitchen hygiene resulting from regional consumers’ awareness of a link between poultry meat and infectious diseases, are also possible explanations.

Our hypothesis of secondary exposure to Campylobacter spp. through dissemination from poultry farms or slaughterhouses has public health implications. Even if poultry meat at retail is free of Campylobacter spp., campylobacteriosis could occur earlier through exposure during production; thus, control should start at this step of the food chain. More research, including microbiological, analytical, and risk assessment studies, needs to be done to prove or disprove the role of dissemination in the spread of Campylobacter spp. and to clarify the possible mechanisms of environmental transmission.

Dr Friesema is an epidemiologist at the Centre for Infectious Disease Control of the National Institute of Public Health and the Environment in the Netherlands (RIVM). Her research interests involve the epidemiology and public health surveillance of pathogens that cause gastroenteritis and foodborne diseases.

We thank the former regional public health laboratories for their contribution to data collection and Annemarie Bouma for providing data about culling.

This research was supported by the new Food and Consumer Product Safety Authority and the Ministry of Health, Welfare and Sport (the Netherlands).

Poultry Culling and Campylobacteriosis Reduction among Humans, the Netherlands