We surveyed laboratories in Washington State, USA, and found that increased use of Shiga toxin assays correlated with increased reported incidence of non-O157 Shiga toxin–producing Escherichia coli (STEC) infections during 2005–2010. Despite increased assay use, only half of processed stool specimens underwent Shiga toxin testing during 2010, suggesting substantial underdetection of non-O157 STEC infections.

Strains of Shiga toxin (Stx)–producing Escherichia coli (STEC) are differentiated by the O antigen on their outer membrane and are broadly classified as O157 or non-O157 STEC (1–3). The ability to produce Stx is a key virulence trait of STEC (1,3,4). STEC infections in humans often cause a self-limited diarrheal illness but can be complicated by hemorrhagic colitis or hemolytic uremic syndrome (1).

Unlike other E. coli strains, serogroup O157 isolates do not ferment sorbitol and are readily identified by culture, appearing colorless on sorbitol MacConkey agar (1,2,4). Both O157 and non-O157 STEC can be identified by detecting Stx with nonculture assays that became commercially available in the United States in 1995 (2,4). The Centers for Disease Control and Prevention (CDC) published formal STEC testing recommendations for clinical laboratories in 2009, advocating that all stool specimens submitted for routine bacterial pathogen testing be simultaneously cultured for O157 STEC and tested with a nonculture assay to detect Stx. Use of this testing protocol ensures timely identification of all STEC infections (2,5). Exclusive testing for Stx delays specific identification of O157 STEC and may impede prompt detection of common-source outbreaks (2–4).

Using data from the Washington State DOH Office of Laboratory Quality Assurance, we identified 74 clinical microbiology laboratories in the state. To assess statewide STEC laboratory testing practices, we developed an online survey and distributed it to microbiology laboratory supervisors at these 74 laboratories during January 2011. Seventeen laboratories reported that all stool specimens are forwarded to a reference laboratory for testing. These 17 laboratories were excluded from the survey sample; however, all indicated reference laboratories were within the state and among the remaining sample (n = 57). Follow-up was completed by email and telephone until a 100% response rate was achieved. The survey requested data on annual number of stool specimens processed for bacterial culture, current protocol for processing stool specimens submitted for routine enteric pathogen testing, and motivations and barriers toward the implementation of Stx testing. If Stx testing was reported, we requested implementation date. Laboratory supervisors were asked to indicate a range for the number of stool specimens processed for bacterial culture at their laboratory during 2010. The 32 laboratories (56%) that reported >300 specimens were asked to specify the quantity. For the 25 laboratories that reported <300 specimens, a midpoint of the range was assigned. All data were analyzed by using SAS for Windows, version 9.2 (SAS Institute, Inc., Cary, NC, USA). 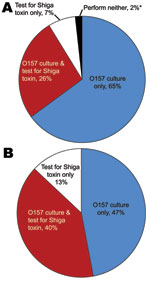 Kathleen Stigi is an epidemiologist at the Washington State DOH. Her research interests include communicable disease surveillance and foodborne diseases, particularly STEC.

This study was supported in part by an appointment to the Applied Epidemiology Fellowship Program administered by the Council of State and Territorial Epidemiologists and funded by CDC cooperative agreement no. 5U38HM000414.