The emergence of Mycobacterium tuberculosis resistance to antituberculosis (anti-TB) drugs is a major public health challenge that is threatening World Health Organization targets set for the elimination of TB (1). Approximately 500,000 cases of multidrug-resistant TB (MDR TB) are diagnosed annually, but the true magnitude of the MDR TB problem is not known because adequate laboratory tools are lacking. Multiple factors contribute to low cure rates, treatment failures, and relapses: poor-quality guidance regarding treatment, HIV co-infection, transmission of resistant forms of TB, underdeveloped laboratory services, and unavailability of alternative drug treatments. However, the evolution of M. tuberculosis is an additional factor that presumably fuels the worldwide problem of emerging resistance. The Beijing genotype is significantly associated with drug resistance (2,3), especially in geographic areas where prevalence of resistance to anti-TB drugs is high, and it is associated with recent TB transmission (2–6). There are also indications that the population structure of M. tuberculosis in areas with a high prevalence of anti-TB drug resistance is changing rapidly toward an increase in Beijing genotype strains (2,6–8).

The World Health Organization target rates for detecting and curing TB in Vietnam have been met; however, the rate of TB infection is not decreasing as expected (4,5). Earlier in this country, the Beijing genotype was strongly correlated with MDR TB and treatment failures (9). Extensive molecular epidemiologic studies showed that the Beijing and East-African/Indian (EAI) genotypes are predominating in Vietnam; each lineage causes ≈40% of the TB cases. According to the single-nucleotide polymorphism typing described by Hershberg et al. (10), the Beijing genotype is a representative of the modern lineage, and the EAI genotype is believed to represent an evolutionary lineage more closely related to the common ancestor of the M. tuberculosis complex.

We compared the in vitro activity of anti-TB drugs against susceptible Beijing and EAI M. tuberculosis isolates from Vietnam and determined the in vitro mutation frequency of these strains during drug exposure. We also determined time-kill kinetics of anti-TB drugs and assessed the emergence of resistant mutants and the concentration range within which resistant mutants and no susceptible mycobacteria were selected. The concentration at which resistant mutants did not emerge (the mutant prevention concentration) was also ascertained. By using this approach, we established an in vitro model for determining differences in the ability of M. tuberculosis strains to resist anti-TB drug treatment.

For Beijing genotype strains, the increase in mutation frequency during exposure to RIF could be due to described missense mutations in the mut genes (13). Such mutations in the mut genes can change the DNA repair mechanism; as a consequence, the frequency of resistant mutant formation might increase. However, a direct correlation between the occurrence of particular mutations in mut genes and altered mutation frequency has not been proven. Furthermore, Werngren and Hoffner (14) found an equal mutation frequency for Beijing (3.6 × 10−8) and non-Beijing (4.4 × 10−8) genotypes. A possible explanation for the discrepancy in findings might be the concentration of RIF used in the subculture plates. In our study, the critical concentration of 1 mg/L RIF was used (11), whereas Werngren and Hoffner used a concentration of 2 mg/L RIF. In addition, Werngren and Hoffner compared the Beijing and non-Beijing genotypes of several genotype families, whereas we compared Beijing and EAI genotype strains that were selected from the same tuberculosis-endemic area and during the same period. 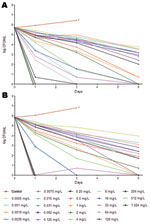 We determined the time-kill kinetics of RIF toward 2 strains with significantly different mutation frequencies: Beijing-1585 (3.7 × 10−3 [3.0 × 10−3 and 4.3 × 10−3, duplicates]) and EAI-1627 (3.5 × 10−6 [2.8 × 10−6 and 4.1 × 10−6, duplicates]). Cultures with low and high densities of Beijing-1585 and EAI-1627 were investigated as described (15). RIF showed strong time- and concentration-dependent activity toward low-density cultures of the 2 strains (Figure 2). Low concentrations of RIF were needed to achieve >99% mycobacterial killing; differences between Beijing-1585 and EAI-1627 were minor (Table 2). However, to achieve 100% killing, especially for Beijing-1585, RIF concentrations had to be increased substantially (Table 2). Compared with the low-density culture for Beijing-1585, a substantial increase in RIF concentrations was needed to achieve 100% killing of the high-density culture (Table 2). This finding may be relevant in the clinical context because high-density mycobacteria populations are expected to exist in infected tissues of TB patients.

We showed that the currently used anti-TB drug susceptibility assays do not discriminate between the in vitro susceptibility, as determined by the methods used in this study, of the M. tuberculosis Beijing and EAI genotype strains. We also showed that the determination of mutation frequencies might be more informative than results of anti-TB drug susceptibility assays. For RIF, mutation frequencies in Beijing genotype strains were high compared with those in EAI genotype strains, and the selection of RIF-resistant mutants among Beijing strains, but not EAI strains, occurred within a wide range of RIF concentrations. In addition, the killing capacity of RIF toward the Beijing genotype is dependent on the density of mycobacteria: high concentrations of RIF are required to achieve 100% killing of high-density Beijing genotype populations but not of high-density EAI genotype populations. These in vitro characteristics might contribute to the less favorable treatment outcome of Beijing genotype TB infections and their significant association with drug resistance. Our findings demonstrate the need for anti-TB drug treatments that will prevent resistance among M. tuberculosis Beijing genotype TB cases, and they suggest that the development of genotype-specific TB therapy might be justified.

Dr de Steenwinkel is a medical doctor, resident in training for medical microbiologist, and a PhD student in clinical microbiology and antimicrobial therapy at Erasmus University Medical Center. His interests include research on improving therapy for TB and fundamental exploration of resistance formation.