Cosavirus Infection in Persons with and without Gastroenteritis, Brazil

To determine possible cosavirus association with clinical disease, we used real-time reverse transcription PCR to test children and HIV-positive adults in Brazil with and without gastroenteritis. Thirteen (3.6%) of 359 children with gastroenteritis tested positive, as did 69 (33.8%) of 204 controls. Low prevalence, frequent viral co-infections, and low fecal cosavirus RNA concentrations argue against human pathogenicity.

The family Picornaviridae comprises 12 genera and includes several leading pathogens affecting human and animal health, e.g., foot-and-mouth-disease virus and polioviruses. With the advent of metagenomics, 3 novel human picornaviruses have been described since 2008: klassevirus, salivirus, and cosavirus (1–3).

Figure 1. Detection pattern of cosavirus in children with gastroenteritis throughout different seasons during 2006–2007, Brazil. Temperature was not plotted because it varied little from mean 25.2°C through the year (range 23.6–26.7°C). Precipitation...

The higher prevalence detected in controls in 2008 could indicate a seasonal infection pattern because specimens were collected in a single weekend in a child-care center. The lower cosavirus-positive results in the same child-care center 3 years after the initial sampling support this idea. However, in sick children, cosavirus-positive specimens were obtained at similarly low rates throughout the year (Figure 1), which might argue against seasonal variation as a generic property of cosavirus infection. 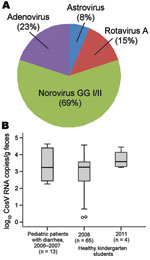 Figure 2. Co-infections and fecal cosavirus (CosV) RNA concentrations. A) Co-infections with established viral causes of diarrhea in children with gastroenteritis who were positive for CosV. Viral RNA and DNA were detected by...

To evaluate whether cosavirus causes disease in ill children, we analyzed co-infections with common viral pathogens causing diarrhea (astrovirus, norovirus, rotavirus, adenovirus) (Figure 2, panel A). In 10 (76.9%) of 13 cosavirus-positive patients, >1 of these pathogens could be detected.

Acute infection with an enteric virus is usually associated with high viral RNA shedding. Cosavirus concentrations were low in outpatient and control children (≈103 copies/g) on 2 sampling occasions (Table 1) and did not differ significantly (analysis of variance F 2.0; p = 0.14; Figure 2, panel B).

To analyze whether a preceding point-source infection caused high cosavirus prevalence in the controls without gastroenteritis sampled in 2008, we determined the genomic sequence of the 5′ untranslated region PCR amplicons and phylogenetically analyzed the sequence (GenBank accession no. JN228118–JN228188). Cosaviruses from these controls were distributed across the phylogenetic tree (Technical Appendix). Maximum nucleotide distance within these cosaviruses was up to 22.5% in the analyzed 398-nt fragment, making a recent point-source infection unlikely.

Human cosavirus infections were reported previously from a limited number of persons and geographic areas (3–6). In Brazil, the 3.6% detection rate in children with gastroenteritis was comparable to the 1.8% rate in a cohort study of gastroenteritis patients in China (6). Although the 6.5% detection rate in 1 control cohort in Brazil was compatible with the 1.7% rate in 60 healthy controls in China, the combined 33.8% prevalence detected in controls from 3 different samplings in Brazil was much higher. Nonetheless, the prevalence was comparable to the 43.9% detected in 41 healthy Southeast Asian children in the only other cohort study (3). Detecting cosavirus in 1 of 154 adults in Brazil was compatible with finding a single cosavirus-positive patient among 1,000 adults with gastroenteritis in Scotland, confirming that cosaviruses are rare and probably neither pathogenic nor commensal in adults (3).

The higher prevalence of cosavirus found in controls than in patients, the frequent co-infections with established pathogens, and the unusually low RNA virus concentrations give evidence against cosavirus involvement in human gastroenteritis. Viruses that replicate in the human gut generally reach concentrations 1,000- to 100,000-fold higher than those of cosavirus. This finding is exemplified by genetically related picornaviruses (Aichi viruses, parechoviruses, and cardioviruses) and established enteric pathogens (e.g., noroviruses and rotaviruses) (8–12). Notably, the aforementioned study on cardioviruses included the same specimens from Brazil, which indicates that poor sample quality was not a factor.

These low concentrations would be compatible with absence of replication in the enteric tract and passive virus ingestion, e.g., from nutritional sources, drinking water, or the respiratory tract. However, nutritional patterns of the tropical countries in which cosavirus have been detected certainly differ. Furthermore, in Brazil, adults are unlikely to have a completely different diet from infants and children. Moreover, the unprecedented detection of cosavirus in a respiratory tract specimen makes ingestion of viruses from nutritional sources alone unlikely, although a link to fluid droplets from drinking water in the respiratory tract is hypothetically possible.

Another explanation for low cosavirus RNA levels in fecal samples is that a cosavirus infection occurred early in the person’s life and produced partial mucosal immunity and limited subsequent cosavirus replication in the gut. This is exemplified for viruses transmitted by the fecal–oral route by up to 100-fold higher fecal shedding of vaccine rotavirus and poliovirus among seronegative persons than among seropositive or previously vaccinated persons (13,14). However, this explanation would be incompatible with the high prevalence of cosavirus in many control children, who were generally older than patients.

Prolonged low concentrations of picornavirus shedding has been demonstrated, e.g., by detectable hepatitis A virus RNA up to 3 months after acute infection (15). Nonetheless, this circumstance is unlikely to explain the low cosavirus concentrations, given the overall high number of persons with positive results.

Although our study extends the known geographic occurrence of cosavirus, whether it is a human pathogen remains to be determined. Future studies would be enhanced by serologic analyses and investigations focusing on nutrition and drinking water in tropical countries.

Dr Stöcker is a physician affiliated with the Federal University of Bahia, Salvador, Brazil, and the University of Bonn, Germany. His primary research interest is the implementation of molecular diagnostics in resource-limited settings.

Cosavirus Infection in Persons with and without Gastroenteritis, Brazil