Viral gastroenteritis outbreaks are associated with illness and death when they occur in institutional settings, notably in long-term care facilities (LTCFs) for the elderly (1). Although most reported outbreaks in LTCFs are caused by norovirus (2), some have similar epidemiologic characteristics but are norovirus-negative after >2 fecal samples are tested by real-time reverse transcription PCR (RT-PCR). Epidemiologically, these norovirus-like gastroenteritis outbreaks are characterized by 24–48-hour incubation periods, if known; vomiting in >50% of affected persons; and 12–60-hour median illness durations (3).

Norovirus and sapovirus are separate genera of the family Caliciviridae. Sapovirus was first detected in 1977 as the cause of a gastroenteritis outbreak in a home for infants in Sapporo, Japan (4), and was thereafter reported primarily among young children with acute gastroenteritis (5). After sapovirus RT-PCR was developed (6), sapovirus outbreaks were discovered in LTCFs and other settings populated by adults (7–9). Sapovirus genogroups I, II, IV, and V (GI, GII, GIV, and GV, respectively) infect humans (10). This report describes sapovirus outbreaks in Oregon and Minnesota, USA, during 2002–2009.

The Oregon and Minnesota state public health departments investigated 2,161 gastroenteritis outbreaks reported during 2002–2009. Of these, 1,119 (52%) were caused by laboratory-confirmed norovirus (defined as >2 norovirus-positive fecal samples by RT-PCR); 466 (22%) were caused by bacteria, parasites, and other agents; 403 (19%) had no fecal samples to analyze; 142 (7%) were norovirus negative (defined as >2 norovirus-negative fecal samples by RT-PCR) and, when tested, were negative for enteric bacterial pathogens; and 31 (<1%) had a single norovirus-negative stool sample. Outbreak-related fecal samples were archived when any specimen remained after analysis, creating a convenience sample of feces for this and other studies.

The Minnesota Public Health Laboratory tested feces from 93 (66%) of the 142 norovirus-negative outbreaks with RT-PCRs for astrovirus, adenovirus, rotavirus, norovirus, and sapovirus (6). Sapoviruses were genotyped by sequence analysis of the capsid gene (11).

Defining a sapovirus outbreak in this study as >1 sapovirus-positive fecal sample, 21 (23%) of the 93 norovirus-negative outbreaks were found to be caused by sapovirus. Adenovirus or norovirus were also identified in 4 (19%) of the 21 sapovirus outbreaks (Table 1). The unexpected norovirus finding is likely due to slight variations in testing methods between state public health laboratories and viral loads nearing the detection level of the RT-PCR.

Of 21 sapovirus outbreaks, LTCFs accounted for 12 (66%); grade schools for 2 (10%); and a prison, a large psychiatric hospital, a cruise ship, a restaurant, and a bed and breakfast for 5 (24%). During 2007, 10 outbreaks (48%) occurred; 14 outbreaks (67%) occurred during the colder months (November–March) of each observed year. Person-to-person transmission accounted for 18 (86%) of 21 outbreaks. On the basis of the outbreak setting, foodborne transmission was suspected, but not confirmed, in 3 (14%) of 21 sapovirus outbreaks; food items were not implicated. Outbreaks involved 5–44 persons (median 34 persons) per outbreak and lasted 1–28 days (median 15 days) (Table 2).

Clinical data were available for 141–269 patients from 14 sapovirus outbreaks in which neither adenovirus nor norovirus were identified. Of 141 patients, 32 (23%) had fevers. Of 269 patients, 132 (49%) had vomiting, and 238 (88%) had diarrhea (Table 2). In Oregon, 1 person with sapovirus was hospitalized and 1 died; no hospitalizations or deaths occurred in Minnesota among persons with sapovirus. Symptoms lasted 24–105 hours (median 48 hours) (data not shown). 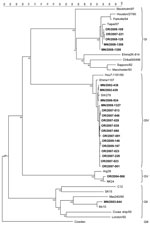 Figure. . . . . . Phylogenetic tree of sapovirus sequences from outbreaks of acute gastroenteritis reported to state public health departments in Oregon and Minnesota, 2002–2009, on the basis of partial...

In this study, the high (66%) proportion of sapovirus outbreaks in LTCFs among 21 outbreaks of previously unknown etiologies is likely to be an artifact of legally mandated outbreak reporting by health care facilities rather than the true distribution of sapovirus outbreaks in Oregon and Minnesota. Still, elderly residents of LTCFs are especially vulnerable to rapid transmission of viral enteric pathogens and serious complications from infection with these agents (12), and therefore merit the attention of public health.

Our data, together with a recent study in Canada (7), demonstrate that sapovirus has been circulating among the institutionalized elderly since at least 2002 and that sapovirus outbreaks increased in 2007 as part of a worldwide surge in gastroenteritis outbreaks (2,7,9). Before these retrospective studies, sapovirus infections among adults >65 years old had been reported as single cases at a low (3%) rate in 2002 (13) and as nosocomial outbreaks in 2010 and 2005 (8,14). In 2010, Svraka et al. reported an age distribution shift from younger to older persons (9).

This study has at least 3 limitations. First, testing a convenience sample of fecal specimens from norovirus-negative outbreaks might have introduced selection bias, the impact of which is uncertain. Second, because outbreak reporting from institutions other than LTCFs is not legally mandated, outbreaks in these settings are underreported. Third, feces from norovirus-positive outbreaks were not assayed for sapovirus. Previously undetected norovirus GI and GII discovered among 21 sapovirus outbreaks indicates that outbreaks might have had >1 etiology. It is therefore likely that the number of sapovirus outbreaks was underestimated.

In summary, gastroenteritis outbreaks in LTCFs should be investigated by public health departments in conjunction with testing of fecal specimens. Public health laboratories should archive fecal samples from all gastroenteritis outbreaks until a cause is established. As in this study, testing with assays for sapovirus, astrovirus, adenovirus, and rotavirus should be conducted when standard methods for norovirus and enteric bacterial pathogens fail to identify a causative agent.

In keeping with recent recommendations, at minimum, adding sapovirus to routine diagnostics of infections that occur in any setting and by any mode of transmission will establish etiologies of some norovirus-negative outbreaks and help define the disease impact and clinical characteristics of sapovirus infections (9,10,13). These data can in turn be used to develop and evaluate sapovirus disease management guidelines and sapovirus outbreak prevention and control measures.

Ms Lee is an epidemiologist at the Oregon Public Health Division, Portland, Oregon. Her research interests include the epidemiology and control of enteric viruses in institutional settings.

We thank Paul R. Cieslak for critically reviewing the manuscript.

Page created: April 11, 2012
Page updated: April 12, 2012
Page reviewed: April 12, 2012
The conclusions, findings, and opinions expressed by authors contributing to this journal do not necessarily reflect the official position of the U.S. Department of Health and Human Services, the Public Health Service, the Centers for Disease Control and Prevention, or the authors' affiliated institutions. Use of trade names is for identification only and does not imply endorsement by any of the groups named above.