Diversity of Parvovirus 4–like Viruses in Humans, Chimpanzees, and Monkeys in Hunter–Prey Relationships

During 2010–2011, we investigated interspecies transmission of partetraviruses between predators (humans and chimpanzees) and their prey (colobus monkeys) in Côte d’Ivoire. Despite widespread infection in all species investigated, no interspecies transmission could be detected by PCR and genome analysis. All sequences identified formed species- or subspecies (chimpanzee)-specific clusters, which supports a co-evolution hypothesis.

Since 2005, new parvoviruses have been discovered in the following groups: humans (parvovirus 4 [PARV4]), bats (Eidolon helvum parvovirus 1), and other mammals (cows, pigs, wild boars, and sheep; Hong Kong virus) (1–5). Phylogenetic analysis suggests that these parvoviruses form a separate novel genus, with the proposed name of Partetravirus, within the subfamily Parvovirinae. Globally, 3 genotypes of PARV4 have been found to infect humans (6,7). Recently, PARV4-like viruses have also been described in chimpanzees and gorillas (8). Researchers have suggested that partetraviruses have co-diverged with their hosts during mammalian evolution. Strains described so far have shown restricted sequence diversity within their host-specific clusters. However, the highly restricted sequence diversity of circulating variants of PARV4 also suggests that the virus has emerged and spread in the human population relatively recently. To clarify whether interspecies transmission is possible for primate PARV4-like viruses, as has been shown for other parvoviruses (9), we investigated samples in a setting where transmission of certain simian viruses between these species has been documented (10,11). We analyzed samples from wild chimpanzees (Pan troglodytes verus) in the Taï National Park, Côte d’Ivoire; their prey, red colobus monkeys (Piliocolobus badius) and black-and-white colobus monkeys (Colobus polykomos); and humans who hunt colobus monkeys in the same region.

Chimpanzee and monkey samples were obtained as described from 2002–2007 (10,11). Human volunteers, recruited during a broad study of primate-borne zoonoses (samples collected between June 2006 and January 2007), ranged in age from 7 to 95 years, and all lived adjacent to the primate habitat. All human participants acknowledged eating bushmeat; most (74%) also reported butchering animals, and a small group (8%) admitted hunting bushmeat. Written informed consent forms were signed by all participants. Ethical approval was obtained from the Institut Pasteur Côte d’Ivoire and the Ministère de la Santé of Côte d’Ivoire. Cross-contamination of samples was avoided by using disposal materials and maintaining a strict safety regime for sampling humans and animals. Samples from different species were handled separately throughout the process, from sampling to analysis.

PARV4-like viruses were detected by qPCR in 7 (41%) of 17 chimpanzees tested. Seven (23%) of 30 red colobus and 2 (13%) of 15 black-and-white colobus monkeys were positive for PARV4-like viruses. The availability of only 1 sample per individual animal limited the analysis of viral tissue distribution (Table).

In a recent study of 91 Old World monkeys tested, none exhibited PARV4-like virus seroreactivity, whereas 63% of chimpanzees (P.t. troglodytes) and 18% of gorillas (Gorilla gorilla) were reactive (8). The Old World monkeys belonged to the family Cercopithecinae, whereas the PARV4-positive Colobus and Piliocolobus species described herein belong to the Colobinae branch of family Ceropithecidae. The serologic assay performed by Sharp et al. is based on a human PARV4 ELISA; therefore, as suggested by the study’s authors, PARV4-like viruses that infect members of the Ceropithecinae family might be too divergent to cross-react. The percentage (43%) of P.t. verus chimpanzees that tested positive for PARV4-like DNA in our study is comparable to the proportion of seropositive P.t. troglodytes chimpanzees in Cameroon (63%), although only 1 animal was positive by PCR in Cameroon. The low rate of PCR-positive results from serum samples in the study by Sharp et al. (8), compared with the rate in the current study, is not unexpected: PARV4 can be found in tissues of nonviremic animals and humans because of its persistence in tissue after resolution of acute infections.

In 12 (1.7%) of the 700 human blood samples, PARV4 genotype 3 was amplified. The median age of infected persons was 11 years (mean 20.8 years, range 7–75 years). As discussed previously (12), the broad age range suggests that PARV4 genotype 3 in Africa has alternative routes of infection from genotypes 1 and 2 that are found in Europe. 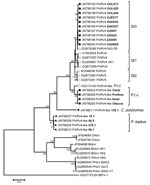 On the basis of phylogenetic analyses of the 20 sequences obtained, we could not detect any interspecies transmission; all sequences formed host species–specific clusters (Figure). Sequence diversity of genotype 3 viruses from humans in the defined region in our study was 0.9% over 1,423 nt positions, which is in accordance with what has been published (12). One additional near full-length genotype 3 sequence from Africa was included in the phylogenetic analysis; it clustered with human sequences found in this study. Compared with sequences from human PARV4 (AY622943) isolates, sequences from isolates from chimpanzees differed by 19% over 4,771 nt and formed a distinct cluster, together with sequences derived from chimpanzees of other subspecies. PARV4-like virus from P.t. verus (JN798203) from this study and P.t. troglodytes (HQ113143) from Cameroon (8) differed by 10%, suggesting subspecies-specific PARV4-like viruses within chimpanzees of 2 different subspecies from distinct habitats. Black-and-white colobus monkey viruses exhibited a closer relationship to viruses from humans than did PARV4-like viruses from red colobus monkeys. This finding corresponds to a previous phylogenetic analysis in which the genomic relationship of different species showed that colobus monkeys separated earlier from piliocolobus monkeys during evolution (13). The distance between PARV4-like viruses from piliocolobus monkeys to those of colobus monkeys supports these data.

To evaluate whether underlying infections were present in the hunters (chimpanzees and humans) originating from the prey, a red colobus PARV4-like virus–specific qPCR was designed. Samples from humans, chimpanzees, and black-and-white colobus monkeys, which previously tested positive in the generic partetravirus qPCR, were retested.

We demonstrated that partetravirus infection is widespread in monkeys, chimpanzees, and humans in West Africa. However, the PARV4-like viruses seem to remain species specific, despite continuous opportunities for interspecies transmission. The data presented here suggest that the risk for zoonotic transmission of PARV4-like viruses from nonhuman primates in West Africa is low. Nonetheless, parvovirus evolution has pointed toward occasional cross-species transmissions (9). This observation, coupled with the frequent intimate contact between bushmeat hunters and their prey, compels the continued vigilance for cross-species transmission of these viruses and others with the intention of mitigating the risk posed by novel introductions of viral zoonoses.

Dr Adlhoch is a veterinarian and virologist in the German Field Epidemiology Training Program at the Robert Koch Institute. Her research focuses on the epidemiology of different zoonotic and vaccine- preventable diseases.

We thank the Ivorian authorities for long-term support, especially the Ministry of the Environment and Forests and the Ministry of Research, the directorship of the Taï National Park, and the Swiss Research Center in Abidjan. For performing necropsies on deceased wild primates, we thank S. Metzger and S. Schenk.

This work was partly supported by Deutsche Forschungsgemeinschaft (grant LE1813/4-1) and the Robert Koch Institute. Global Viral Forecasting is graciously supported by the US Department of Defense Global Emerging Infections, Surveillance and Response Systems and the Defense Threat Reduction Agency, Cooperative Biological Engagement Program, Google.org, the Skoll Foundation, and the US Agency for International Development Emerging Pandemic Threats Program PREDICT project under the terms of Cooperative Agreement Number GHN-A-OO-09-00010-00.