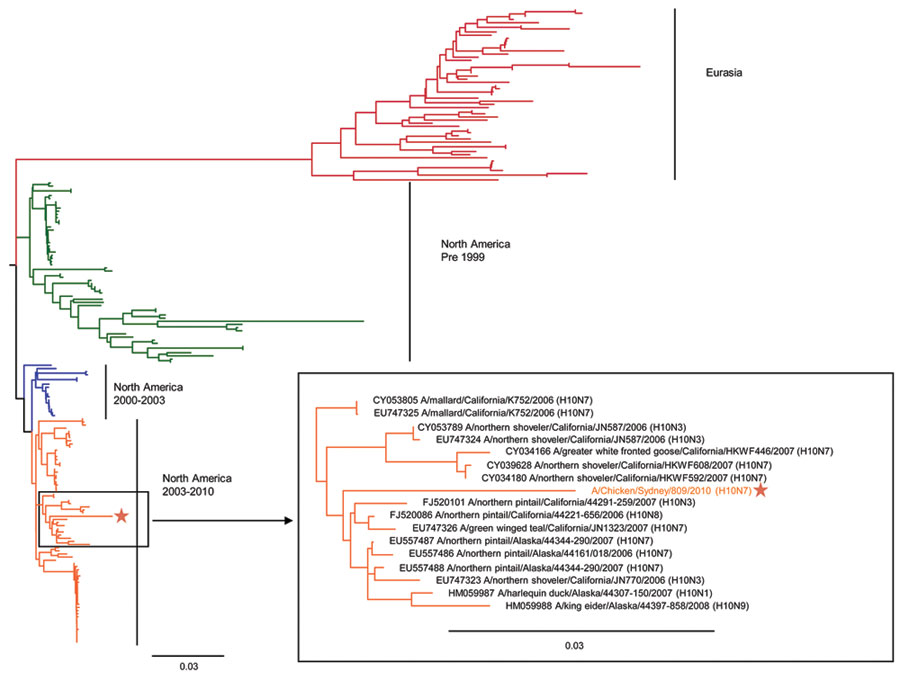 Figure. . . Phylogenetic analysis of avian influenza subtype H10 hemagglutinin (HA) sequences. HA sequences of all subtype H10 viruses deposited in GenBank were downloaded, and a neighbor-joining tree was created by using Jukes-Cantor as the genetic distance model on Geneious 5.14 software (Biomatters Ltd, Auckland, New Zealand) and a phylogenetic tree drawn by using FigTree version 1.3.1 (http://tree.bio.ed.ac.uk/software/figtree/). A representative HA sequence from the subtype H10N7 viruses detected from the New South Wales chicken farm outbreak (A/chicken/Sydney/809/2010) has been submitted to the Global Initiative on Sharing All Influenza Data (accession no. EPI339225) and is marked by the star in the tree. Scale bar indicates nucleotide substitutions per site.

Page created: April 05, 2012
Page updated: April 05, 2012
Page reviewed: April 05, 2012
The conclusions, findings, and opinions expressed by authors contributing to this journal do not necessarily reflect the official position of the U.S. Department of Health and Human Services, the Public Health Service, the Centers for Disease Control and Prevention, or the authors' affiliated institutions. Use of trade names is for identification only and does not imply endorsement by any of the groups named above.