MSF is endemic to Sicily (Italy); fatal cases occur each year, and the prevalence of R. conorii in dogs is high (3–6). Recently, R. conorii Malish strain and R. conorii Israeli spotted fever strain were confirmed in humans in Sicily in whom MSF was diagnosed (4), which suggests that other R. conorii strains might be present and diagnosed as causing MSF. The rickettsiae within the R. conorii complex, which are relevant for the study of bacterial evolution and epidemiology, can be properly identified only by appropriate genetic analyses.

We analyzed 15 blood and 19 inoculation eschar samples collected during 2005–2009 from 31 patients in Palermo Province and 2 in Catania Province, none of whom had recently traveled. None were severely ill, but all 33 had clinical manifestations and laboratory results compatible with MSF: 1-week incubation after tick bite, fever, headache, myalgia, papulonodular rash that started on the upper limbs and spread centripetally with or without tache noire, and detection of antibody titers >180 to R. conorii by indirect immunofluorescence antibody test (bioMérieux, Marcy L’Etoile, France). 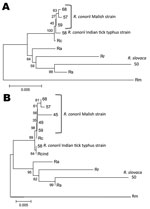 These results demonstrated that new rickettsiae, such as R. conorii Indian tick typhus strain, of public health relevance are emerging in Europe. The widespread distribution of tick vectors in Europe and the transtadial and transovarial transmission of the pathogen in ticks might favor transmission to humans.

This research was supported by the Italian Ministry of Health, project IZSSI 08/08.

Page created: May 08, 2012
Page updated: May 08, 2012
Page reviewed: May 08, 2012
The conclusions, findings, and opinions expressed by authors contributing to this journal do not necessarily reflect the official position of the U.S. Department of Health and Human Services, the Public Health Service, the Centers for Disease Control and Prevention, or the authors' affiliated institutions. Use of trade names is for identification only and does not imply endorsement by any of the groups named above.