Influenza A virus infection causes disease in humans and domestic animals, including pigs, horses, and chickens, and seasonal epidemics among humans in the Northern and Southern Hemispheres result in hospitalizations and deaths worldwide. Influenza A virus transmission studies are often conducted in laboratory guinea pigs (1,2) because the virus can efficiently spread from infected animals to naive guinea pigs by direct and indirect (short-range infectious aerosols) contact (3,4). However, whether guinea pigs are naturally infected with influenza virus outside the laboratory setting is not known. 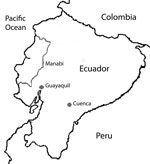 Figure 1. . . . Three regions of Ecuador where guinea pig serum samples were obtained: Cuenca, Guayaquil, and Manabi. The country is bordered by Colombia to the north, Peru to the east...

We obtained serum samples from 40 guinea pigs from 3 different regions of Ecuador (Figure 1), 20 from Cuenca and 10 each from Guayaquil and the Manabí region. Cuenca is located in the Andes region, 2,500 m above sea level; it is one of the main producers of guinea pig meat. Guayaquil, the most populated city in Ecuador, is located at the head of the Gulf of Guayaquil on the Pacific Ocean. The Manabí region is located in western Ecuador on the Pacific Ocean coast. Serum samples were collected from adult guinea pigs that we purchased from local farms (Cuenca), where they had been raised as livestock, or from live animal markets (Guayaquil and Manabí). The samples were collected by heart puncture under general anesthesia (combination of ketamine and xylazine). Animals were euthanized after samples were obtained.

ELISA was done as described (7), with slight modifications for the use of guinea pig serum. The cutoff for serum considered positive for influenza virus was the value of the negative control (naive guinea pig serum) +3 SD (from 3 repetitions). For Western blot (WB) analyses (8), serum samples were pooled into groups of 5 (groups 1–4, 5–6, and 7–8 were from Cuenca, Guayaquil, and Manabí region, respectively). Pooled samples were also used for the hemagglutination inhibition (HI) assay, as described (9), using influenza strains Brisbane07, Wisconsin05, and Vietnam04. As positive controls, we used serum from guinea pigs that we had infected with Cal09, Brisbane07, NewCal99, Wisconsin05, Vietnam04, or Yamagata88.

Figure 2. . . . Results of Western blot analyses of pooled serum samples from adult guinea pigs in Ecuador. The guinea pigs were obtained from farms in Cuenca, where they had been...

We showed the presence of influenza virus antibodies with HI activity to different virus subtypes in guinea pigs marketed through local farms and live animal markets in different regions of Ecuador. Seroprevalence was similar for influenza A virus subtypes H1 (50%) and H3 (45%). A study of influenza among humans in Ecuador also showed similar seroprevalences for subtypes H1 (5.1%) and H3 (5.5%) (10). This10-fold difference between seroprevalence rates among humans and the guinea pigs in our study may be explained by animal husbandry practices that facilitate influenza transmission (e.g., the crowding of animals in cages).

The presence of antibodies to influenza B virus in guinea pigs is notable because infection with this virus is thought to be restricted to humans (11). Recent studies in our laboratory demonstrated that guinea pigs can also be infected with influenza B viruses and that they readily transmit the virus to naive guinea pigs (12). These studies support our finding that influenza B virus has the potential to be transmitted from humans to other species. Further studies are needed to isolate and characterize the type B influenza virus present in the population of guinea pigs to determine if there has been an adaptation to the new host or if the guinea pig is only a transient reservoir for the human virus.

We found that several guinea pigs had antibodies against influenza A (H5). Ecuador is purported to be free of avian influenza (13); however, reports from other countries in South America demonstrate the presence of avian subtypes H3, H5N2, H7N3, and H13N9 in wild birds (14). In addition, chickens, turkeys, and guinea pigs that are later sold in local farmers’ markets are raised together by some families, thereby facilitating contact of guinea pigs with avian influenza viruses. We tested only for seroreactivity to the H5 hemagglutinin and the N1 neuraminidase; therefore, further studies are needed to determine whether different avian origin influenza viruses are present in the guinea pig population.

Dr. Leyva-Grado is a postdoctoral fellow at Mount Sinai School of Medicine in New York. His primary research interests include the study of the pathophysiology of virus-induced respiratory infections in humans and domestic animals and the development of therapeutics for virus infections.

This work was partially funded by the Center of Excellence for Influenza Research and Surveillance, National Institutes of Health (grant HHSN266200700010C to P.P.) and the Keck Foundation (P.P.). F.K. was supported by an Erwin Schrödinger fellowship (J 3232) from the Austrian Science Fund.

Page created: June 12, 2012
Page updated: June 18, 2012
Page reviewed: June 18, 2012
The conclusions, findings, and opinions expressed by authors contributing to this journal do not necessarily reflect the official position of the U.S. Department of Health and Human Services, the Public Health Service, the Centers for Disease Control and Prevention, or the authors' affiliated institutions. Use of trade names is for identification only and does not imply endorsement by any of the groups named above.