During January–March 2011, diagnoses of hepatitis E virus (HEV) infection increased in Marseille University hospitals in southeastern France. HEV genotype 4, which is described almost exclusively in Asia, was recovered from 2 persons who ate uncooked pork liver sausage. Genetic sequences were 96.7% identical to those recently described in swine in Europe.

Beginning February 21, 2011, a biosurveillance program (EPIMIC) (7) detected an increase in the number of HEV infections diagnosed at Marseille University hospitals in southeastern France. During February 21–March 28, the weekly number of serum samples that were tested and found positive for HEV was above the elected critical threshold (Technical Appendix Figure 1).

HEV 5′-ORF2 RNA was recovered from the serum of 8 case-patients. Phylogenetic analysis (2) showed that 4 patients each had HEV genotype 3c or 3f (Technical Appendix Figure 2). Sequences from 2 unrelated case-patients (nos. 7, 8) showed 99.8% identity; for other pairwise comparisons, maximal identity was 93.4% (mean 83.6%). 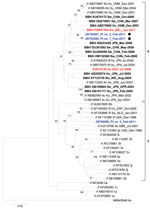 We could not recover HEV 5′-ORF2 RNA from the serum of 3 case-patients (nos. 1, 2, 6). For case-patient 6, this could be explained by a low viral load. When targeting ORF1 and 3′-ORF2, we recovered HEV genotype 4 (HEV-4) from serum samples from case-patients 1 and 2 (Figure; Technical Appendix Figure 3) (5,10). Molecular testing results for these samples were checked in duplicate and by testing different serum samples from the same case-patients. HEV-4 RNA from the 2 case-patients showed 100% identity for ORF1 and 99.8% identity for ORF2. The next closest match (96.7% identity) was the first HEV-4 RNA in swine reported in Europe (GenBank accession no. HQ857384) (Figure) (8). The next 2 closest matches (91.0%–91.3% identity) were recovered from swine in China (GenBank accession nos. EU676172 and DQ279091) (Figure). However, the sequences showed only 86.0% identity with a genotype 4f HEV RNA recovered from a patient in Germany (9).

None of the 11 case-patients had traveled abroad during the 2–9 weeks before hepatitis onset. Of the 11 case-patients, 6 (55%), including the 2 with HEV-4, ate uncooked pig liver sausage (figatelli [2]) (Table 2). The 2 patients with HEV-4 were not related. Because 4 contacts of the 2 HEV-4–infected case-patients also ate some of the figatelli eaten by the case-patients (Table 1, Table 2), we investigated whether these contacts had markers for HEV infection. Test results for anti-HEV IgM were positive for the wife of case-patient 1 and a friend of case-patient 2; the HEV PCR result was barely positive for contact 1a, who had an elevated level of alanine aminotransferase (165 IU/L; reference <45 IU/L). These 2 persons were clinically asymptomatic.

We report a concurrent rise in testing for and diagnoses of HEV infections in Marseille during January–March 2011. This rise may reflect increased clinician awareness of HEV or an increased incidence of HEV infection that may have resulted from the use of improved tools for HEV diagnosis.

The major finding in our study was the recovery of HEV-4 sequences from 2 of 6 case-patients who ate uncooked figatelli purchased in southern France. These sequences were closely related to the sequence for the first-reported HEV-4 RNA in swine in Europe (8), which was recovered in Belgium and classified as genotype 4b. HEV-4 is indigenous to Asia, where it has been recovered from pigs and humans (1,6,14). For the 2 HEV-4 RNA sequences obtained in our study, the best matches among sequences from Asia were from HEV strains from swine in China. Since its first report in China in 1999, HEV-4 has been increasingly described as endemic in pigs and involved in most sporadic cases of hepatitis E (1,14). Several HEV subtypes have been described in China, including subtype 4b (1,6,14). In Europe, autochthonous infection with a genotype 4f HEV in a person in Germany was reported in 2008 (9), and a case of HEV-4 infection acquired in India was reported for a person in England in 2010 (15). Studies in China have shown relatedness between HEV-4 sequences recovered from humans and swine in the same geographic area, which suggests zoonotic transmission (1). Moreover, sequences for HEV-4 RNA recovered from a father and son in Japan who ate barbecued pig meat were almost identical, and sequences were identical for HEV-4 RNA from packaged pig liver sold in a grocery store and from a patient in whom HEV infection developed after the person ate grilled pig liver (1,2).

We are grateful to Didier Raoult for his encouragement regarding this work. We thank Audrey Ferretti for technical assistance.

Page created: July 23, 2012
Page updated: July 23, 2012
Page reviewed: July 23, 2012
The conclusions, findings, and opinions expressed by authors contributing to this journal do not necessarily reflect the official position of the U.S. Department of Health and Human Services, the Public Health Service, the Centers for Disease Control and Prevention, or the authors' affiliated institutions. Use of trade names is for identification only and does not imply endorsement by any of the groups named above.