To the Editor: Bats are now recognized as natural reservoirs for many families of viruses that can cross species barriers and cause emerging diseases of humans and animals. Protecting humans against emerging diseases relies on identifying natural reservoirs for such viruses and surveillance for host-jumping events. The emergence of the Middle East respiratory syndrome coronavirus (MERS-CoV) on the Arabian Peninsula (1) further justifies increased surveillance for coronaviruses (CoVs) in bats. MERS-CoV most likely is a zoonotic virus from a bat reservoir and is associated with high case-fatality rates among humans. The existence of a diverse array of alphacoronaviruses in bats in the United States, Canada, and Trinidad has been reported (2–6). Recently, a possible new alphacoronavirus was detected in an urban roost of bats in southern Brazil (7), and a survey of bats in southern Mexico reported 8 novel alphacoronaviruses and 4 novel betacoronaviruses, 1 with 96% similarity to MERS-CoV (8). These findings expand the diversity and range of known bat coronaviruses and increase the known reservoir for potential emerging zoonotic CoVs.

Expanding on our previous work (2,3), we analyzed samples from 97 bats from Brazil and 75 bats from Mexico (Technical Appendix). During 2007–2010, intestinal samples were collected from bats of 10 species in northwest São Paulo state in southeastern Brazil. These bats had been submitted to the University Estadual Paulista for rabies testing as a result of epidemiologic surveillance or, in some cases, because of possible or known contact with humans. During 2011–2012, as part of an ongoing rabies surveillance project, intestinal samples were collected from bats of 12 species in their usual habitats in Jalisco state in midwestern Mexico. Bats from a variety of species, including insectivorous, nectarivorous, frugivorous, and hematophagous bats, were included in this study for the purpose of obtaining a diverse array of potential exposures. Intestines were collected and stored, and RNA was purified as described (2). CoV RNA was detected by using a pancoronavirus PCR selective for the RNA-dependent RNA polymerase gene, and amplicons were sequenced as described (3). Virus isolation was not attempted as part of this study. 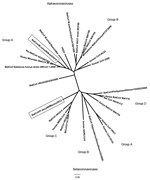 Figure. . . Phylogenetic tree showing relationships based on 412-nt and 439-nt sequences of a conserved region of gene 1b of BatCoV/Molossus rufus28/Brazil/2010 (alphacoronavirus) and BatCoV/Pteronotus davyi49/Mexico/2012 (betacoronavirus) to other known coronaviruses....

From 1 of 17 Molossus rufus bats and 1 of 8 Molossus molossus bats, an identical novel alphacoronavirus was detected (BatCoV-M.rufus28/Brazil/2010, GenBank accession no. KC886321). Both specimens were collected in Brazil during 2010 from adult male bats that had been found in urban areas on residential property. The 412-nt sequence of this virus was most closely related to alphacoronaviruses detected in Eptesicus fuscus bats in North America (82% nt identity), Myotis australis bats in Australia (77% nt identity), Miniopterus bats in Kenya (77% nt identity), and Rhinolophus bats in Hong Kong (77% nt identity) (Figure). Bats of the genus Molossus are insectivorous; their geographic range is restricted to the New World, from northern Mexico to northern Argentina.

A novel betacoronavirus (presumably group C) was detected in a specimen from 1 of 4 Pteronotus davyi bats (BatCoV-P.davyi49/Mexico/2012, GenBank accession no. KC886322). This specimen was collected in 2012 from an adult male bat roosting in a cave in La Huerta, Mexico. The 439-nt sequence of this virus has 71% nt identity to the novel human group C betacoronavirus MERS-CoV and 72% nt identity to various group D betacoronaviruses detected in Rousettus, Pipistrellus, and Tylonycteris bats in the Philippines, China, and Kenya (Figure). Bats of the species P. davyi (Davy’s naked-backed bat) are insectivorous and are found from southern Mexico to the northern parts of South America. They prefer to roost in caves and man-made structures, such as mines.

In summary, we found a novel alphacoronavirus in bats from Brazil and a novel betacoronavirus in a bat from Mexico. Both viruses were detected in bats with known or potential contact with humans. Because the bats we sampled were mostly adult males, the prevalence of CoVs that we identified is probably an underestimation of the true incidence of CoVs in these bat populations. For bats of other species, incidence of CoVs among juvenile and female bats is higher (2,9). Furthermore, we used a non-nested, broadly conserved CoV PCR, which might have limited the sensitivity of CoV RNA detection. The finding of a novel betacoronavirus in insectivorous bats in the New World is noteworthy. Three human CoVs (229E, SARS-CoV, and MERS-CoV) all have animal reservoirs of closely related viruses in Old World insectivorous bats (10) from which they most likely emerged, either directly or indirectly, into the human population. Ongoing surveillance for CoVs in wildlife and increased research efforts to better understand the factors associated with CoV host-switching events are warranted.

Page created: August 27, 2013
Page updated: September 17, 2013
Page reviewed: September 17, 2013
The conclusions, findings, and opinions expressed by authors contributing to this journal do not necessarily reflect the official position of the U.S. Department of Health and Human Services, the Public Health Service, the Centers for Disease Control and Prevention, or the authors' affiliated institutions. Use of trade names is for identification only and does not imply endorsement by any of the groups named above.