In 2012, a debate was published in Science about the number of humans who have experienced subclinical infection with avian influenza A H5 and how this unknown denominator could affect the case-fatality rate reported by the World Health Organization (1,2). The controversy rests, to a large extent, on interpretation of serologic tests used to detect prior H5 infection and the paucity of virologically confirmed subclinical or mild cases. Here we describe a case of subclinical avian influenza A H5 infection, confirmed both virologically and serologically.

The subclinical case was detected in 2011 during a contact investigation of a 40-year-old man suspected of having influenza A(H5N1) virus infection. The man’s household had sick poultry that were consumed by household members. The chickens roamed close to the sleeping area of the household members. The index case-patient, his daughter, and his daughter-in-law were involved in slaughtering and preparing the chickens. The index case-patient had fever, cough, dyspnea, and diarrhea that progressed over 2 days, leading to hospital admission. Despite intensive care and treatment with oseltamivir and antibiotics, the disease progressed, and he died 2 days later.

A throat swab taken from the index case-patient on day 3 of illness was tested by reverse transcription PCR, and results were positive for influenza A(H5N1) virus. Hemagglutination inhibition (HI) and microneutralization (MN) tests for H5N1-specific antibodies were negative in samples taken during the acute phase of illness (Technical Appendix).

On day 5 of illness of the index case-patient, a contact investigation was initiated. Throat swab specimens were collected from 4 household members and 1 close contact of the index case-patient: his spouse (age 47 years), daughter (age 18 years), daughter-in-law (age 25 years), and grandson (age 1 year) and an unrelated man (age 43 years). None of the contacts had signs or symptoms. Infection control measures were initiated, and all household members were given oseltamivir (75 mg/d) for 1 week and instructed to seek immediate health care if fever or respiratory symptoms developed. Results of HI testing of serum samples collected during the acute illness phase of the index case-patient were negative.

The human throat swab samples were tested by conventional RT-PCR. The sample from the index case-patient’s daughter, collected 6 days after the woman had slaughtered a chicken, was positive for influenza A/H5 by real-time RT-PCR, and virus was recovered on day 10 of inoculation on MDCK cells (Technical Appendix). The virus was identified by sequencing as influenza A/H5, clade 2.3.2.1. The woman had no signs or symptoms at the time the throat swab was collected, nor did she report any symptoms to health authorities during the subsequent week. Chickens were also tested, and 4 chickens in the commune tested positive for influenza A(H5N1) virus by RT-PCR of throat and cloacal swab specimens.

Repeat throat swab specimens collected from the 4 household contacts 6 days after the initial collection yielded negative test results for influenza/H5. Serologic testing showed seroconversion only in the woman with subclinical infection; her HI titer increased from <20 to 160 against both clade 2.3.4 and 2.3.2.1 viruses (Table 1). During a second contact investigation 1 month later, 20 other members of the commune were screened by RT-PCR of throat swab specimens and serologic testing. All results were negative for influenza A(H5N1) virus. 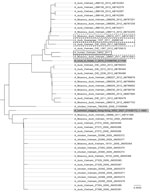 The full genome of the identified virus strain (A/CM32/2011) was sequenced (Technical Appendix) and confirmed to be clade 2.3.2.1 by using the Highly Pathogenic H5N1 Clade Classification Tool (3). The open reading frames of the genes were translated and aligned with all clade 2.3.2.1 sequences available from the Influenza Research Database (www.fludb.org). Amino acid changes are summarized in Table 2. A phylogenetic analysis of clade 2.3.2.1 from Vietnam sequences showed a high homology between the samples, including A/CM32/2011 (Figure). To identify possible changes specific to human infection, the differences between the clade consensus and A/CM32/2011 were compared with influenza A(H5N1) virus samples from Asia. No amino acid changes were preferentially seen in human samples compared with the avian samples. A/CM32/2011 contains the N170D (4) and T172A mutations in HA that are associated with airborne transmissibility of influenza A(H5N1) virus in ferrets (5); these mutations are found in most avian influenza A(H5N1) clade 2.3.2.1 samples (Table 2, Appendix). The results indicate that the virus is a typical influenza A(H5N1) clade 2.3.2.1 virus, with no remarkable changes.

We report subclinical infection with avian influenza A(H5N1) virus in a human in Vietnam, confirmed by RT-PCR, virus isolation from throat swab, and detection of specific antibodies. A subclinical case was also reported from Pakistan in 2008 (6). Sequence analysis of the Vietnam case showed that the infecting virus belonged to influenza A(H5N1) clade 2.3.2.1. This clade was first detected in poultry in northern Vietnam in early 2010 and replaced clade 2.3.4 in that area, whereas clade 1 remains predominant in southern Vietnam, with 4 confirmed cases reported in early 2012 (7). The recent clade 2.3.2.1 has evolved from clade 2.3.2 viruses that has circulated among poultry in eastern Asia since 2005 and has become predominant in several Asian countries. Since clade 2.3.2.1 viruses were initially detected in Vietnam, prevalence has increased in poultry, but no associated rise in detection of human cases has been observed (7). Similarly, clade 2.3.2.1 virus has been circulating in poultry in India, but no human cases have been reported (8). The HA sequence of this virus is similar to an influenza A(H5N1) virus detected by RT-PCR in a 3-year-old patient with influenza-like illness investigated as part of the National Influenza System Surveillance in 2010 (M.Q. Le, unpub. data). This patient had mild symptoms and survived, which raises the possibility that this strain represents a less virulent form of influenza A(H5N1) in humans.

In our investigation, the case-patient with subclinical infection was treated with oseltamivir while she was asymptomatic, which may explain why she did not develop clinical disease. Studies using human volunteers indicate that seasonal influenza virus shedding may occur ≈24 hours before symptom onset in 25%–30% of patients (9). Likewise, community cohort studies show presymptomatic shedding and asymptomatic shedding in 15%–20% of patients infected with seasonal influenza viruses and with influenza A(H1N1)pdm09 virus (10–12). Oseltamivir is known to prevent disease when given before inoculation in human volunteers and to shorten duration and lessen the severity of illness in natural infection (13), but we found no evidence in clinical and volunteer studies from the literature suggesting that oseltamivir may prevent clinical illness once detectable infection has been established, as we found in this subclinical case (13,14). The patient we investigated probably was exposed during slaughtering of a chicken 6 days before her positive throat swab was collected. However, because chickens in the commune tested positive at the time of the contact investigation, ongoing exposure to influenza A(H5N1) cannot be excluded as the source of infection. Furthermore, the patient may not have reported symptoms to the health authorities for personal reasons.

Thus far, evidence of subclinical influenza A(H5N1) virus infections has been collected on the basis of serologic testing only (1), but it is unclear whether serologic testing reliably detects subclinical cases. According to the World Health Organization, MN titers >80 are indicative of infection but must be confirmed by a second serologic test because of the possibility of cross-reactivity (1). The interpretation of results from a single serum sample is limited by the specificity or sensitivity of serologic tests, and viral shedding times may mean that infected cases may be missed. Estimating the incidence of asymptomatic influenza A(H5N1) virus infection in humans exposed to sick poultry or human case-patients requires further careful study using early collection of swab samples and paired acute and convalescent serum samples.

Dr Mai Quynh Le is a virologist and the head of the National Influenza Center of Vietnam at the National Institute of Hygiene and Epidemiology in Hanoi. Her research interests are the evolution and co-evolution of animal and human influenza viruses and zoonotic infectious diseases.

We thank the staff of the National Institute of Hygiene and Epidemiology, the Preventive Medical Centre Bac Kan, and the Academic Medical Center for their support.