To compare the severity of Plasmodium vivax malaria with that of P. falciparum malaria, we conducted a retrospective cross-sectional study of 356 adults hospitalized with malaria (2009–2011) in Pakistan. P. vivax and P. falciparum accounted for 83% and 13% of cases, respectively; 79.9% of patients with severe malaria were infected with P. vivax.

Malaria is endemic to Pakistan and 64% and 36% of malaria cases are attributed to Plasmodium vivax and P. falciparum, respectively (1). The purpose of this study was to identify the complications of P. vivax among hospitalized malaria patients and compare the prevalence of these complications with those of P. falciparum malaria.

Records showed that Giemsa-stained peripheral blood smears, the malaria rapid diagnostic test (RDT), or both, were used for malaria diagnosis. The RDT used antibodies against P. falciparum histidine-rich protein 2 and P. vivax lactate dehydrogenase. For 45 case-patients for which results from peripheral blood smears and RDTs were discordant or unreliable, surface protein-specific PCR was performed by using stored patient blood samples to identify the Plasmodium species (2,3). Clinical syndromes were classified as severe on the basis of the World Health Organization’s 2010 severe falciparum malaria criteria (4).

Statistical analysis was performed by using SPSS version 20 (http://www-01.ibm.com/software/analytics/spss/). Averages, χ2 test of independence, odds ratios with 95% CIs, and analysis of variance were computed when applicable.

Case-patients with prior co-morbid conditions were excluded from relevant subanalyses, for example, diabetes mellitus patients were excluded from hypoglycemia analysis. All analysis was also repeated after excluding all case-patients with associated infections and comorbid illnesses. The classification “comorbidity” included all conditions in the Charlson comorbidity index for mortality (5). The study was approved by the Aga Khan University’s Ethics Review Committee. 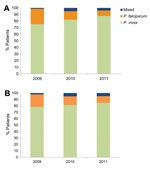 Figure 2. . Percentage of Plasmodium falciparum and P. vivax patients with severe malaria, Karachi, Pakistan, 2009–2011. The number of mixed infections (n = 13) over 3 years was too small for comparison.

The most common complications in the patients are shown in Table 2. P. vivax and P. falciparum were responsible for comparable rates of pulmonary edema, the need for mechanical ventilation, coagulopathy, hypoglycemia, hemoglobinuria, metabolic acidosis, renal impairment, liver dysfunction, bleeding, and multi-organ dysfunction. Altered consciousness, anemia, and jaundice were associated with P. falciparum malaria. The mean platelet count for P. vivax patients was 55, significantly lower than that of P. falciparum patients (67.5; p = 0.001) and those with mixed infections (61; p = 0.024).

Analysis was repeated after all patients with comorbid conditions were excluded (Table 1), which left 229 case-patients who had no illness other than malaria. Among these, 30 (13%) patients had P. falciparum infection, 189 (83%) had P. vivax infection, and 10 (4%) had mixed infection (Figure 1, panel B). In these patients, severe malaria appeared significantly more common in falciparum versus vivax malaria (53% and 33%, respectively, p = 0.029); however, 79.5% of the severe cases were caused by P. vivax. Hemoglobinuria and a higher mean creatinine level were more likely to occur with falciparum malaria than with vivax malaria (p<0.02). Shock and secondary bacterial infections were no longer associated with P. falciparum infection. All other statistical associations held, although the strength of association varied.

A study of hospitalized malaria patients at the Aga Khan University Hospital during 1997–2001 showed that 51.8% of cases were caused by P. vivax and 46.5% by P. falciparum, with mortality rates of 1.5% and 2.0%, respectively (6). Recent studies from elsewhere in Asia reported that 20%– 40% of patients hospitalized with malaria had P. vivax malaria (7), with mortality rates of 0.8%–1.6% (7). In our study, a much greater proportion of malaria cases were caused by P. vivax (83%), which was not unexpected because of the decreasing number of P. falciparum cases during the study period. Despite this high incidence of P. vivax malaria, the mortality rate found in our study is reassuring and stable at 1.0%.

The higher prevalence of jaundice, anemia, and hemoglobinuria seen with falciparum malaria in our study reflect the greater degree of hemolysis caused by P. falciparum. P. vivax has been reported elsewhere to cause a similar degree of anemia as P. falciparum (8). Differences in the level of endemic anemia between these study populations and may explain this discrepancy. Similar to our findings, another study reported the incidence of thrombocytopenia in hospitalized patients with vivax malaria as high as 96.3% (9). Pulmonary involvement has often been reported in complicated vivax malaria (7), as we found in our study. Hepatic dysfunction with jaundice has been reported in up to 57% of hospitalized P. vivax patients (10); our findings were similar.

To estimate the true effects of severe disease with vivax malaria, researchers have recommended excluding comorbid conditions (7) and other infections (11). In this study, excluding concurrent illness enabled a stronger association between P. falciparum and severe malaria to emerge. Thus, P. falciparum caused a higher likelihood of specific complications such as central nervous system disturbance and hemolysis than did P. vivax. Yet, ≈80% of severe malaria still occurred in patients with P. vivax malaria.

Limitations of the study include its retrospective design, low power, and lack of PCR diagnostics for all the samples. Furthermore, the study findings reflect the malaria situation at a single urban tertiary care hospital, which cannot be generalized without knowing the denominator of all hospitalized malaria cases in the study area.

We acknowledge collaboration with Raymond A. Smego from the University of the Free State, Bloemfontein, South Africa, whose intellectual contribution to this study continued until his untimely death.

PCR studies for this project were funded by an Aga Khan University Research Council grant.

Page created: October 31, 2013
Page updated: October 31, 2013
Page reviewed: October 31, 2013
The conclusions, findings, and opinions expressed by authors contributing to this journal do not necessarily reflect the official position of the U.S. Department of Health and Human Services, the Public Health Service, the Centers for Disease Control and Prevention, or the authors' affiliated institutions. Use of trade names is for identification only and does not imply endorsement by any of the groups named above.