To the Editor: Hantaviruses (family Bunyaviridae) are transmitted to humans by inhalation of aerosolized virus in contaminated urine and feces, mainly from rodents of the families Cricetidae and Muridae. Although infections in rodents are asymptomatic, infections in humans can lead to hemorrhagic fever with renal syndrome and hantavirus cardiopulmonary syndrome (1).

In Europe, 5 rodent-borne hantaviruses have been detected: Dobrava-Belgrade, Saaremaa, Seoul, Puumala, and Tula (1,2). The most common and widespread hantavirus in Europe is Puumala virus, which is associated with the mildest form of hemorrhagic fever with renal syndrome (1).

From September 2009 through November 2011, a total of 495 wild rodents consisting of 133 brown rats (Rattus norvegicus), 269 wood mice (Apodemus sylvaticus), 50 house mice (Mus musculus), 35 bank voles (Myodes glareolus), and 8 field voles (Microtus agrestis) were caught live across northwestern England (Technical Appendix). Animals were euthanized in the field by use of isoflurane inhalation, according to UK Home Office Guidelines (http://webarchive.nationalarchives.gov.uk/+/http://www.homeoffice.gov.uk/docs/hc193.html). Within 2 hours, kidney, liver, and lung tissues were removed. When field conditions allowed, blood samples were collected; otherwise, heart tissue was collected. Samples, and carcasses that could not be processed within 2 hours, were stored at –80°C.

Comparisons of nucleotide and amino acid sequence identities demonstrated, as expected, that the Arvicolinae-associated hantaviruses showed the highest similarity to the UK sequence at the nucleotide (65.7%–78.8% for S and 76.6%–77.5% for L) and the amino acid (66.4%–86.3% for S and 80%–88% for L) levels (Technical Appendix). 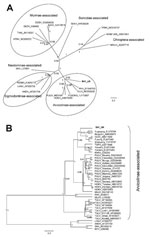 Phylogenetic analyses of partial L (Figure, panel A) and partial S sequences (Figure, panel B) confirm the inclusion of the viral sequence from vole B41 as a distinct member of the Arvicolinae-associated hantaviruses. In the partial L tree (Figure, panel A), viral sequence B41 clustered with Prospect Hill and Tula viruses with good support, although in the partial S tree (Figure, panel B), B41 seems to be more closely related to the Asian Microtus vole–associated hantaviruses, albeit with low posterior probability values. These differences in tree topologies probably reflect different compositions of the sequence datasets.

Blood collected from vole B41 was positive for hantavirus-specific antibodies (indirect fluorescent antibody test that used Puumala antigen) (8), suggesting cross-reactivity, as would be expected for Arvicolinae-associated hantaviruses. Hantavirus RNA was detected in the kidneys but not the liver of vole B41 and not in the lungs, liver, or kidneys of the 7 other field voles. Degenerate cytochrome B gene PCR and sequencing (9) were used to confirm the morphologic identification of the field voles (B41 CytB GenBank accession no. KC222031).

The nucleotide and amino acid sequence divergences between B41 and the most related hantaviruses correspond to that typically found between hantavirus species (5). The phylogenetic analyses further support B41 as a distinct hantavirus. Thus, we propose to name this novel virus Tatenale virus, reflecting the medieval name of its place of origin.

M. agrestis voles, among the most numerous mammals in mainland Britain, have not been shown to be primary carriers of a specific hantavirus, although recent studies suggest that they might be involved in the maintenance of Tula virus in Germany (10). Further surveillance is needed to confirm that M. agrestis voles are the reservoir hosts of Tatenale virus, provide an estimate of virus prevalence, and determine zoonotic risk. Current knowledge of other Microtus vole–borne hantaviruses suggests that although they might infect humans, their pathogenic potential is generally low (1). Future work will involve attempts to isolate Tatenale virus and generate its full-genome sequence.

Financial support was received from the UK Department for Environment, Food and Rural Affairs project SV3037 and from the Research and Policy for Infectious Disease Dynamics program of the Science and Technology Directorate (US Department of Homeland Security), the Fogarty International Center (National Institutes of Health), MSD Animal Health, and EU FP7–funded Research Infrastructure Grant “European Virus Archive” (no.19 228292). This study was partially funded by EU grant FP7-261504 EDENext and is catalogued by the EDENext Steering Committee as EDENext 063 (www.edenext.eu).