Serosurvey of Dogs for Human, Livestock, and Wildlife Pathogens, Uganda

To the Editor: Domestic dogs live in close association with humans and livestock, participating in the transmission of diseases of zoonotic, veterinary, and conservation interest (1,2). Most households in Uganda have traditionally kept dogs for hunting and for help with herding, security, and guarding livestock. Most dogs receive no prophylactic measures (e.g., vaccinations) and roam freely; this situation exposes them to pathogens from eating garbage, rodents, and stillborn animals and other carcasses and through inhalation during scent communication. Thus, dogs are a reservoir for certain pathogens and a useful sentinel for others (3). 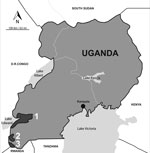 In 2011, serum samples were obtained from 116 mixed-breed dogs during a rabies vaccination campaign in and near 3 national parks in southwestern Uganda; the dogs were >4 months of age and were voluntarily brought in by their owners (Figure, Appendix, Table). Two of the parks, Bwindi Impenetrable (BI) and Mgahinga Gorilla (MG), have some of the most biologically diverse tropical forests in eastern Africa and are home to mountain gorillas. The third park, Queen Elizabeth (QE), is home to populations of protected carnivores and ungulates. The parks lie within a densely populated rural landscape; in some areas, the population is as high as 500 persons/km2.

For humans, the domestic dog is the main source of exposure to RABV. The possibility that the presence of the rabies titers in the dog serum samples was due to a previous vaccination can be ruled out because the only previous recent campaign in the area was conducted by the authors. Antibodies against RABV in apparently healthy dogs have been reported in Africa (6), and rabies seems to be not invariably fatal in dogs. Dogs that have recovered from a rabies infection are prone to shed RABV in their saliva for long periods (7). Antibodies against RABV were more frequently found in castrated dogs. This finding may be due to an increase in virus-related deaths among noncastrated dogs; such dogs tend to be more aggressive and to roam, so they may come more frequently into contact with pathogenic RABV strains.

Results indicate that both CDV and CPV are actively circulating in the studied dog populations. High CDV seroprevalence rates have been reported among other rural dog populations in Africa (8). Sick, debilitated pups are at high risk for predation by wild carnivores, so spillover may take place. A dog population exhibiting similar characteristics to the population we studied was believed to be the origin of the 1994 CDV epidemic among Serengeti wildlife (8). Furthermore, carnivores use feces for scent communication, so the probability of infection by CPV in wild carnivores in the study area may also be high.

In developing countries, leptospirosis is emerging as a major public health problem and also causes enormous economic losses because of disease in livestock (9). The most commonly detected serovars in this study were those that have rats and dogs as reservoirs (Table). Visceral leishmaniasis in humans is also a major health problem in several areas of eastern Africa, where the number of cases has dramatically increased during the past 20 years. Transmission of Leishmania donovani in eastern Africa may take place through anthroponotic or zoonotic cycles, although, to our knowledge, no reservoir host had been identified (10).

The mean T. gondii seroprevalence detected during this survey appears to be the highest reported for dogs worldwide. This protozoon has implications for human and animal health, and dogs, who probably become infected with T. gondii when eating raw meat, are a good sentinel for environmental contamination by this parasite. On the other hand, dogs serve as the definitive host for N. caninum, which is a major cause of abortions in cattle and causes economic losses wherever it is enzootic.

Some of these diseases may also have implications for the conservation of endangered mountain gorillas. Diseases such as leptospirosis, toxoplasmosis, and especially, rabies could be fatal for gorillas, and there are unpublished reports of fights between hunting dogs and gorillas.

Our work should serve as a first step toward the establishment of preventive strategies for improvements in the health of humans and domestic animals living in rural Uganda and for the health of the country’s unique wildlife. Tracing the role of dogs in the cycle of the studied pathogens is crucial for the design of control programs.

We thank Steven Rubanga, Abdulhameed Kateregga, and all the staff of Conservation through Public Health; the Mgahinga Community Development Organization; Martin Esau; District Veterinary Officers from Kanungu, Kasese, and Kisoro local governments; and Vicky Ticó for help with field work. We are indebted to Ingenasa for contributing to this study by freely providing the ELISA kits.

This study received partial support from project CGL2010-17931. We are grateful to the John D. and Catherine T. MacArthur Foundation and the United States Agency for International Development (through the Wildlife Conservation Society) for providing financial support to the Conservation Through Public Health team during this study.

Page created: March 15, 2013
Page updated: March 15, 2013
Page reviewed: March 15, 2013
The conclusions, findings, and opinions expressed by authors contributing to this journal do not necessarily reflect the official position of the U.S. Department of Health and Human Services, the Public Health Service, the Centers for Disease Control and Prevention, or the authors' affiliated institutions. Use of trade names is for identification only and does not imply endorsement by any of the groups named above.

Serosurvey of Dogs for Human, Livestock, and Wildlife Pathogens, Uganda