To the Editor: Human enteroviruses (EVs) are small, nonenveloped RNA viruses belonging to the family Picornaviridae. Approximately 100 EV genotypes have been identified. Recently, EV68 epidemics in respiratory tract infections (RTIs) have been reported worldwide (1,2). Moreover, rarely detected EVs (e.g., EV-C104 and EV-C109) have been increasingly identified in patients with RTIs (3–7), indicating a possible association of EVs with respiratory syndromes.

Little is known about the role of EV-C104 in RTIs. EV-C104 has been reported in 3 countries: Switzerland (7 children with pneumonia or otitis media) (3), Italy (3 adults and 4 children with RTIs) (4,7), and Japan (1 adult with an upper RTI [URTI](5). We report additional EV-C104 strains in 4 children with lower RTIs and in 1 adult with a URTI in China. 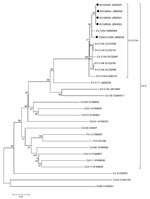 The 4 EV-C104–positive boys all had fever and cough for >10 days before their hospitalization. Chest radiographs showed increased lung markings or patchy shadows diagnosed as pneumonia or bronchopneumonia. RSV or adenovirus was also detected in 3 of the boys. The fourth boy was positive for parainfluenza virus type 1, adenovirus, and bocavirus. Clinical outcomes for all 4 children were favorable. The EV-C104–positive man had fever, chills, pantalgia, and expectoration for 1 day before a URTI was diagnosed. EV-C104 was the only virus detected in this patient.

We compared relative viral loads for all viruses in the 5 patients and quantified viral load of EV-C104 and other viruses by using real-time PCR (methods available upon request). Median viral load in the 5 patients was 2.4 × 106 RNA copies/mL (range 5.6 × 104–7.0 × 106 copies RNA/mL (Table, Appendix).

This study was supported by the National Major Science and Technology Project for the Control and Prevention of Major Infectious Diseases in China (2012ZX10004-206), the National Science Foundation for Outstanding Young Scientists (81225014), and the Fondation Mérieux.