Bats are associated with an increasing number of emerging and reemerging viruses, many of which pose major threats to public health (4). We conducted a viral metagenomic analysis of 6 species of bats from Myanmar. The analysis revealed a large number of viral contigs annotated to orthohepadnavirus with <70% nt identity (B. He, unpub. data), suggesting the presence of orthohepadnaviruses in these animals. We describe the virus by full genomic analysis and morphologic observation.

We used PCR to further study the prevalence of orthohepadnavirus in the 6 bat species; the condition of the samples made serologic assay and pathology impracticable. Viral DNA was extracted from liver tissue of each of the 853 bats by using the QIAamp DNA Mini Kit (QIAGEN, Hilden, Germany). To detect virus in the samples, we conducted PCR by using the TaKaRa PCR Kit (TaKaRa, Dalian, China) with a pair of degenerate pan-orthohepadnavirus primers (sequences available upon request). The PCR reaction was as follows: 45 cycles of denaturation at 94°C for 30 s, annealing at 54°C for 30 s, extension at 72°C for 40 s, and a final extension at 72°C for 7 min. Positive results were obtained for 22 long-fingered bats (Miniopterus fuliginosus). Of these bats, 2.19% (7/320) were from Sedon County and 4.69% (15/320) from Wutao County; the viruses they harbored shared >98% nt identity. No other species had positive amplification results, indicating that M. fuliginosus was the most likely species to harbor orthohepadnaviruses. 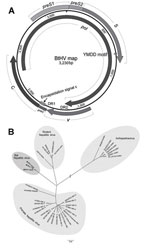 Figure 1. . Predicted schematic representation of the bat hepatitis virus (BtHV) genome and its phylogenetic relationship with other hepadnaviruses. A) Genomic structural map of BtHV. Boxes and arrows represent the open reading...

Of the 22 positive samples, 3 were randomly selected for full genome amplification: M086 from Sedon County and 776 and M005 from Wutao County. PCR was conducted by using the PCR protocol defined above with high-fidelity Pfu DNA polymerase (Promega, Madison, WI, USA) and 4 pairs of specific primers (sequences available upon request). Four overlapping amplicons were obtained, sequenced in both directions, and assembled into the full genomic sequence by using SeqMan, version 7.1.0 (DNASTAR, Madison, WI, USA). All 3 full genomes (GenBank accession nos. JX941466– JX941468) were 3,230 nt in length, which is close to the size of primate hepatitis viruses (≈3,200 nt) but smaller than rodent hepatitis viruses (≈3,300 nt). We analyzed the genome structure by using Vector NTI Advance 10 (Invitrogen, Carlsbad, CA). The results showed that the bat hepatitis viruses (BtHVs) contained the same circular and compact genomic structure as other orthohepadnaviruses, comprising 4 open reading frames encoding the multifunctional Pol, preS1/preS2/S, preC/C, and X proteins in the same direction (Figure 1, panel A).

Genomic sequence comparison and phylogenetic analysis based on amino acids of the pol gene (2,562 bp) were constructed with ClustalW version 2.0 (www.clustal.org/) and MEGA5 (5). Phylogenetic tree analysis showed that previously described orthohepadnaviruses formed 2 clusters, primate hepatitis viruses and rodent hepatitis viruses, whereas the 3 newly identified BtHVs formed an independent cluster within the Orthohepadnavirus genus (Figure 1, panel B). Sequence comparison showed that the full genomes of the BtHVs were 63.1%–65.3% and 33.9%–34.8% identical to members of the Orthohepadnavirus and Avihepadnavirus genera, respectively. Similar low identities were also observed separately in the 4 genes of the BtHVs (Table). These results support the classification of the BtHVs within the Orthohepadnavirus genus, being distantly related to current species and likely to form a new species designated as BtHV. 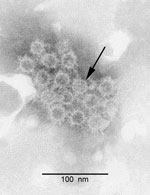 Hepadnaviruses have not been grown in any available in vitro cell system; thus, we did not attempt to isolate BtHV in cell culture. To detect the presence of virus particles, we used pooled liver tissues from the 3 bats that were randomly selected for full genome amplification. We homogenized the pooled tissues in SM buffer (50 mM Tris, 10 mM MgSO4, 0.1M NaCl; pH7.5), followed by clarification by low-speed centrifugation to remove cell debris. We then passed the pooled sample through a 0.22-μm syringe filter (Millipore, Carrigtwohill, Ireland). Polyethylene glycol 6000 was added, and the resulting precipitate was sedimented at 12,000 × g in a desktop centrifuge (Eppendorf, Hamburg, Germany) for 40 min at 4°C. The pellet was resuspended and examined after negative staining in a JEM-1200 EXII transmission electron microscope (JEOL, Tokyo, Japan). Numerous spherical particles of ≈20 nm diameter were observed (Figure 2). The particles were morphologically similar to the Australia antigens of HBV, the most abundant viral component found in HBV-infected humans and animals and also known as surface protein or S antigen (6,7). PCR amplification of DNA extracted from the virus pellet revealed the full genome of the BtHV, with the expected size of ≈3200 bp (image not shown).

Our observations provide strong evidence for the circulation of orthohepadnaviruses in at least 1 species of bats, M. fuliginosus, in Myanmar. These bats have a wide distribution (8), and increasing numbers of viruses, including coronaviruses and betaherpesviruses, are being isolated from them (9,10). Of the 6 bat species we sampled, only M. fuliginosus was positive for BtHV. The prevalence of BtHV-positive bats in the 2 counties from which we obtained bats, was 2.2% and 4.7%, respectively, indicating that this species is likely a natural reservoir host of BtHV. The lack of detection of BtHV in bats from the other 5 species may be due to the limited numbers of bats sampled (although no evidence of hepadnavirus was found in any of the 176 R. ferrumequinum bats) or to a narrow host range of the virus. Further study is required to determine the tropism and prevalence of BtHVs in other bat species.

Mr He is a doctoral candidate at Institute of Military Veterinary, Academy of Military Medical Sciences. He is majoring in animal virology, with research interests focusing on the discovery of bat emerging viruses.