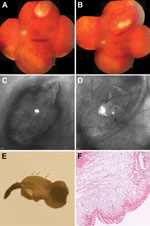 Figure. . . Cysticercosis-like eye infection caused by the tapeworm Taenia martis in a woman. A) Fundus at the patient’s initial visit, before medical therapy. The cyst lies subretinally at the temporal...

The patient was a 43-year-old German woman who sought care during July 2010, after 4 days of perceiving flashing lights in her visual field and a paracentral scotoma in her left eye. Visual acuity in both eyes was 20/20. Examination of the left fundus revealed a mobile subretinal tumor at the temporal upper retinal branch vessel with adjacent intraretinal and subhyaloid bleeding (Figure, panels A–C; Video). The subretinal tumor resembled a cestode larva.

The patient reported no other symptoms at that time. Laboratory evaluation found no eosinophilia or elevation of total IgE. Serologic testing results were negative for antibodies against the following parasites: Taenia solium, Echinococcus multilocularis, E. granulosus, Dirofilaria immitis, Strongyloides spp., and Toxocara canis. Fecal testing results were negative for worm eggs. Images from ultrasonography of the liver and magnetic resonance imaging of the head were unremarkable. The patient’s travel history included—in addition to southern European countries—trips to Nepal and Thailand 15 years previously.

At the time of examination, the patient lived in a small village near Freiburg (im Breisgau) in southwestern Germany. She grew vegetables in the family garden, which was next to a forest. Her 3 children and husband did not report any health problems. For the past 6 years, the family had owned a dog, which received antiparasitic medications on a regular basis; recent checks for intestinal parasitic infection found no ova.

The suspected cause of the woman’s illness was cysticercosis caused by the larva of T. solium; systemic antiparasitic therapy was started (albendazole 400 mg 2×/d, dexamethasone 20 mg/d). The size of the larva diminished (Figure, panel D; Video), but the patient remained symptomatic. Therefore, after 8 days of therapy, the cyst was removed by retinotomy. A few days later, peripheral retinal detachment occurred and was treated by a second vitrectomy and intravitreal gas injection. Because of the repeated gas tamponade, a gas cataract developed, which necessitated cataract surgery. At the end of March 2011, the patient’s visual acuity had returned to 20/20 in both eyes.

Although nearly all patients who had cysticercosis-like infections caused by T. crassiceps tapeworms were immunosuppressed (1,2), we found no signs of immunosuppression in the patient reported here. The only identified risk factor for this patient was consumption of homegrown vegetables, which could have been contaminated by marten feces.

The clinical and histologic appearance of the organism in this patient suggested cysticercosis caused by a T. solium tapeworm. However, the specific diagnosis of T. martis tapeworm infection was possible only by use of molecular methods. Thus, human infections with T. martis and other animal tapeworms might occur at times but might be misdiagnosed as T. solium cysticercosis. For therapy, the rules and considerations are probably the same as those for T. solium cysticercosis, as described (8,9). Concerning antiparasitic therapy, one must be aware of possible complications caused by intraocular immunologic reactions. As demonstrated by the case reported here, surgical removal of a subretinal larva is connected with the risk for retinal detachment and cataract formation. The identification of the responsible tapeworm is useful for epidemiologic reasons, for determining the source of infection. We therefore suggest using molecular methods to determine the exact species of parasites removed from human tissue.

We gratefully acknowledge Heidrun von Thien for her technical assistance. We thank the patient for her collaboration and her approval to publish this case report, and we thank the board of directors of the Bernhard Nocht Institute for Tropical Medicine, Rolf Horstmann, Bernhard Fleischer, and Egbert Tannich for their support.

Page created: June 12, 2013
Page updated: June 12, 2013
Page reviewed: June 12, 2013
The conclusions, findings, and opinions expressed by authors contributing to this journal do not necessarily reflect the official position of the U.S. Department of Health and Human Services, the Public Health Service, the Centers for Disease Control and Prevention, or the authors' affiliated institutions. Use of trade names is for identification only and does not imply endorsement by any of the groups named above.