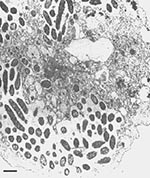 Legionella-like amebal pathogens (LLAPs) are nonculturable, protozoonotic, gram-negative bacilli. They were named LLAPs because of their ability to infect and multiply intracellularly within amebae (Figure 1) in the same way that legionellae infect and multiply in protozoa and human alveolar macrophages (1-3). However, unlike other known legionellae, LLAPs do not grow routinely on buffered charcoal yeast extract agar (BCYE), or on any other known bacteriologic media.

The first known LLAP was isolated from Polish soil by Drozanski in 1954 (4). Until 1991 when it was described and given the name Sarcobium lyticum (5), it was simply referred to as an obligate intracellular bacterial parasite of free-living amebae (6, 7). The next isolation of an LLAP was in England more than 20 years later. Since then, LLAPs have been commonly isolated from various sources and found to infect a variety of amebae (Table 1). Because one LLAP cannot be differentiated from another, each strain is given the name LLAP suffixed by a designated number. Except for S. lyticum, LLAP-1, LLAP-5, and LLAP-3, which was a clinical isolate, all LLAPs were originally isolated from sources associated with confirmed cases or outbreaks of Legionnaires' disease (Table 1).

Amebae are natural hosts for legionellae in the environment (2) and have been used to isolate legionellae from clinical samples (8). The relationship between these organisms is unique in that amebae, which generally use other bacteria as food, are parasitized by legionellae. The mechanism by which legionellae multiply and evade host defenses in amebae simulates the mechanism of infection in humans (9,10). The ability of Legionella pneumophila to infect epithelial cells in vitro is also enhanced by prior cultivation of the bacteria in amebae (11). This suggests that there may be a connection between the pathogenicity of legionellae for mammalian cells and animal models and their pathogenicity for amebae.

Whereas members of the genus Legionella, particularly L. pneumophila, are recognized as important etiologic agents of pneumonia (12), little is known about the clinical relevance of LLAPs; nevertheless, some evidence suggests that they may be an unrecognized and possibly significant cause of respiratory disease. LLAPs’ inability to grow or multiply in the absence of amebae makes it difficult to isolate or identify them in clinical samples by conventional techniques. No serologic reagents are currently available for the detection or identification of LLAPs in clinical specimens. It is particularly noteworthy that one LLAP strain was originally isolated by amebal enrichment of a sputum specimen from a patient with pneumonia (13). Clinical samples from the patient were culture and serologically negative for L. pneumophila serogroups 1 through 6. However, incubation of the sputum sample with Acanthamoeba polyphaga resulted in numerous bacteria-infected amebae. The patient demonstrated a fourfold rise in antibody titer to the bacteria from the infected amebae. Even though the bacteria, now known as LLAP-3, could not be recovered on BCYE, the patient was treated for Legionella infection and recovered (13). Attempts to culture LLAP-3 on BCYE or on any other artificial media have been unsuccessful.

Since the discovery of LLAP-3, there has been further serologic evidence for the involvement of LLAPs in pneumonia. Between 1989 and 1993, the Public Health Laboratory (Leeds, UK) routinely screened sera from patients with suspected Legionnaires' disease for antibodies to LLAP-3 and found more than 10 cases with appropriately timed rising titers and several convalescent-phase sera. A few cases of respiratory disease with rising titers to LLAP-1 and little activity to LLAP-3 were also found (13).

In a study to assess the role of LLAPs in community-acquired pneumonia, 19% of 500 hospitalized patients with pneumonia of unidentified origin demonstrated a >= fourfold rise in antibody titer to 1:128 to at least one of nine LLAPs tested (14). These patients had no evidence of infection with known Legionella species (15). Cross-reactivity or nonspecific antibody rises may have accounted for some of the cases. Nevertheless, these findings are particularly important since no etiologic agent is identified for an estimated 50% of the 500,000 adult pneumonia cases occurring annually in the United States (16-18).

With the exception of S. lyticum, LLAPs have not been named or classified because the inability to cultivate them on laboratory media has limited their genetic and biochemical characterization. In this study, LLAPs were cocultured with Hartmannella vermiformis and Acanthamoeba polyphaga, depending on the most suitable host for each LLAP. Samples were cultured on blood agar and BCYE without cysteine to rule out bacterial contaminants. Bacteria were separated from amebae by differential centrifugation of cocultures before isolation of genomic DNA for ribosomal DNA sequencing.

The genes that code for rRNA in bacteria are highly conserved and can be used to establish the phylogenetic relationship between organisms (19). Previous 16S rDNA analysis of S. lyticum (20) and LLAP-3 (21), showed that they are closely related (91.6% to 95.8% rRNA similarity) to members of the genus Legionella. It was, therefore, suggested that LLAPs may have been responsible for the Gen-Probe positive specimens from patients with pneumonic illness, for whom conventional culture and serologic tests for legionellae were negative (13,22,23). The Gen-Probe system is a rapid diagnostic test for legionellae that uses a DNA probe complementary to the rRNAs of Legionella species (23,24).

To establish the degree of relatedness of all known LLAPs to each other and to other members of the family Legionellaceae, we recently amplified the 16S rRNA gene from five LLAP strains (LLAP-1, LLAP-2, LLAP-7, LLAP-8, and LLAP-9), using primers specific for Eubacteria. The amplified DNA was sequenced and compared with other bacterial sequences (including those of all Legionella species and LLAPs) held by GenBank/EMBL. Analysis of the 16S rRNA gene sequences showed that all 12 LLAPs in this study are closely related (91.2% to 97.0% similarity over 1303 bases of 16S rRNA sequence) to members of the genus Legionella. This is consistent with the 16S rRNA sequence identity (90.2% to 99.1% over 1303 bases) that exists between the 39 validly described members of the genus.1

Phylogenetic analysis showed that all the LLAPs in this study form a coherent cluster with other members of the family Legionellaceae (Figure 2). LLAP-1, LLAP-8, and LLAP-10 were grouped in distinctly different clades, whereas LLAP-2, LLAP-3, LLAP-6, LLAP-7, LLAP-9, and S. lyticum formed a single well-defined clade, most closely related (>96.9% similarity) to another clade consisting of LLAP-4, LLAP-11, and LLAP-12 (Figure 2). LLAP-2, LLAP-3, LLAP-6, LLAP-7, LLAP-9, and S. lyticum shared a 16S rRNA sequence similarity of >98.9%. LLAP-11 and LLAP-12 had 16S rRNA sequence homology of 100%. Overall 16S rRNA sequence similarity values from some Legionella species, all the LLAPs in this study, and Coxiella burnetii are shown in Table 2. These results suggest that these 12 LLAP strains may represent up to five new species of Legionella and their various subtypes on the basis of a minimum sequence identity of 97.0% between strains of the same species (Table 3). However, they may include new subtypes of previously described species. It is also possible that these strains represent more than five species because, even though 16S rRNA sequence identity can be used routinely to distinguish and establish relationships between genera and well-resolved species, it may not be sufficient to guarantee species identity (25,26). For example, in this study, several Legionella species had sequence similarities exceeding 98.0%. L. cherrii and L. wadsworthii shared a sequence similarity of 98.7%. L. rubrilucens and L. erythra had a sequence identity of 99.1%. L. sainthelensi and L. cincinnatiensis were likewise identical by 99.1%. Furthermore, bacterial strains exhibiting more than 99.5% rRNA sequence identity may belong to different species by current standards for DNA-DNA hybridization (70% DNA reassociation) (25). DNA hybridization studies are, therefore, needed to determine species identity.

Preliminary fatty acid analysis showed that these LLAPs have branched fatty acids, characteristic of members of the genus Legionella. The gas-liquid chromatography fatty acid profiles obtained, however, appeared to be distinct from those of other known legionellae (data not shown).

Several attempts have been made to culture LLAPs on conventional Legionella media, BCYE. S. lyticum could occasionally be recovered from a coculture with amebae on alanine supplemented BCYE (27). We attempted to grow 12 LLAP strains on regular BCYE and BCYE supplemented with various amino acids, including alanine, and have recently succeeded in cultivating LLAP-6, LLAP-7, LLAP-9, and LLAP-10 on bacteriologic media for the first time. All colonies had the characteristic cut-glass appearance associated with legionellae. LLAP-1 had previously been cultured on BCYE supplemented with sodium selenate (13,28). In this study, LLAP-1 was successfully cultured on regular BCYE and BCYE supplemented with alanine in the absence of sodium selenate. S. lyticum, LLAP-1, LLAP-6, LLAP-7, LLAP-9, and LLAP-10 had a cysteine requirement for growth. Other factors influencing growth are yet to be determined, but sodium selenate and alanine may not necessarily be required for growth. Cultivation of LLAPs on bacteriologic media still cannot be considered a routine process because recovery is not always possible, and extremely low numbers of the plated bacteria produce colonies.

Some species of Legionella are known to produce colonies that autofluoresce on exposure to long-wave ultraviolet (UV) light. This facet of their colonial morphology often assists in identifying and speciating isolates. LLAP-2, LLAP-6, LLAP-7, LLAP-9, and S. lyticum exhibited blue-white autofluorescence when exposed to long-wave UV light while LLAP-1 and LLAP-10 did not autofluoresce. This is consistent with the clustering pattern (Figure 2) where the blue-white fluorescent LLAPs formed a well-defined clade.

On the basis of these results, we propose that all 12 Legionella-like amebal pathogens be included in the genus Legionella as Legionella species, with strain specifications. A proposal was recently made for the transfer of the species S. lyticum to the genus Legionella as L. lytica comb. nov. (29). It appeared that L. lytica was being proposed for LLAPs. However, our study suggests that LLAPs may represent a minimum of five species. Consequently, the species name L. lytica, though appropriate for the strain formerly classified as S. lyticum, cannot be applied to all LLAPs.

The genus Legionella is defined in Bergey's Manual of Determinative Bacteriology as follows:

Rods measuring 0.3-0.9 x 2.0-20.0 µm or more. Do not form endospores or microcysts and are not encapsulated. Not acid fast. Cells stain gram negative. Motile by one, two, or more straight or curved polar or lateral flagella; non-motile strains are occasionally seen. Aerobic. L-Cysteine hydrochloride and iron salts are required for growth. Oxidase test is negative or weakly positive. Nitrates are not reduced. Urease negative. Gelatin is liquified. Branched chain fatty acids predominate cell wall. Chemoorganotrophic, using amino acids as carbon and energy sources. Carbohydrates are neither fermented nor oxidized. Isolated from surface water, mud, and from thermally polluted lakes and streams. There is no known soil or animal source. pathogenic for humans, causing pneumonia (Legionnaires' disease) or a mild, febrile disease (Pontiac fever) (30,31).

The description in Bergey's Manual should be amended to include the following statement: “Some legionellae appear to be primarily obligate intracellular parasites of amebae that exhibit little or no growth on current laboratory media.”

Further characterization is needed to classify each LLAP strain to species level and assess the need for additional amendments to the present description of the genus Legionella. Appropriate diagnostic techniques are needed to determine the clinical relevance of LLAPs, and particularly their possible role in respiratory disease.

We are very grateful to Drs. Anne Whitney, Chi-Cheng Luo, and Catherine Bender for valuable assistance with analysis of sequence data. The picture of S. lyticum within A. castellanii was reprinted with permission from Prof. W. Drozanski of the Institute of Microbiology, Maria Curie-Sklodowska University, Poland.

Some of these data were presented at the 96th General Meeting of the American Society for Microbiology in May 1996.

2The Remel Poly-ID kit used in this study is designed to identify 22 species and 31 serogroups of Legionella (34,35).