Severe fever with thrombocytopenia syndrome (SFTS) is an emerging infectious disease in China. The incidence and clinical and laboratory characteristics of SFTS are not clearly defined. During May 22–October 2, 2011, a total of 24 patients with fever, thrombocytopenia, and leukopenia were clinically diagnosed as having SFTS in Yiyuan County, Shandong Province, China. We conducted laboratory tests for these SFTS patients. SFTS virus (SFTSV) infection was confirmed in 22 patients by using reverse transcription PCR and ELISA by acute-phase and convalescent-phase serum samples. Clinical and laboratory manifestations included fever (100%), gastrointestinal symptoms (91%), myalgia (55%), chills (41%), thrombocytopenia (100%), and leukopenia (95%).

Severe fever with thrombocytopenia syndrome (SFTS) is an emerging infectious disease that was identified in 2009 in rural areas in China. This disease is caused by SFTS virus (SFTSV), a novel bunyavirus in the family Bunyaviridae, genus Phlebovirus. (1). Fatal cases of infection with SFTSV have been recently reported in Japan and South Korea (2,3).

SFTS is a severe disease and has had a case-fatality rate of 12%–30% in China (1). The major manifestations of SFTS are fever, thrombocytopenia, leukopenia, and increased serum levels of hepatic aminotransferases. SFTSV has been detected in ticks and might be transmitted by them (1,4). Occasionally, the disease can also be transmitted from person to person through contact with infected blood or mucus (5–9).

The epidemiologic and clinical characteristics of SFTSV infection are not well defined. Approximately 30% of clinically diagnosed cases of SFTS cannot be confirmed by laboratory tests (1,10), and clinicians may confuse this disease with diseases caused by other pathogens. Therefore, to obtain information on clinical and laboratory characteristics of this disease, with a focus on diagnosis, we used acute-phase and convalescent-phase serum samples from 24 patients given a clinical diagnosis of SFTS in Yiyuan County, Shandong Province, China, an area to which SFTSV is endemic (11), 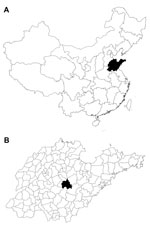 We defined a clinically diagnosed case-patient with SFTS as a patient who had fever, leukopenia, or thrombocytopenia without another known acute infectious disease. We did not have data on what other infectious diseases were ruled out. We defined a laboratory-confirmed case of SFTS as a clinically diagnosed case with a positive antibody or reverse transcription PCR (RT-PCR) result for SFTSV. Acute-phase serum samples, clinical information, and laboratory data for all patients given a diagnosis of SFTS in 2011 in Yiyuan County were submitted to the Yiyuan County Centers for Disease Control and Prevention.

Total RNA was extracted from blood by using the QIAamp Viral RNA Mini Kit (QIAGEN, Hilden, Germany). RNA was used as template for RT-PCR to amplify SFTSV RNA by using primers derived from large (L) and small (S) RNA segments of the virus (Table 1). RT-PCR was performed by using the One-Step PCR Kit (QIAGEN), and the RT-PCR product was used as template for nested PCR. Nested PCR products were sequenced to confirm SFTSV sequences.

Serum samples were tested for antibodies (IgG and IgM) against SFTSV by using a double-antigen sandwich ELISA kit (Shanghai Zhengshuo Biotech Company, Shanghai, China) (12,13). The ELISA kit used recombinant nucleoprotein (NP) of SFTSV as antigen for coating plates. In initial screening, an undiluted serum sample was used to determine whether the sample was positive for antibodies against SFTSV. Positive serum samples were further diluted in 2-fold increments starting at 1:2. Each sample (50 μL) was added to wells of antigen-coated plates, and plates were incubated for 30 min at 37°C to enable SFTSV antibodies to bind to NP of SFTSV. The plates were washed, horseradish peroxidase–labeled recombinant SFTSV NP was added, and reactivity was detected by using substrates for horseradish peroxidase. Absorbance was read at 450 nm. A serum samples was considered to contain antibody to SFTSV when absorbance of the sample was ≥2.1 fold greater than that of a negative control (provided by the manufacturer), which was 3 SD above the mean optical density 450 nm for the person sampled. The ELISA had similar specificity and sensitivity as a microneutralization assay and showed no cross-reactivity with antibodies against hantavirus or dengue virus (12,13).

Twenty-four patients were given a diagnosis of SFTS according to our case definition. We considered that 22 of these 24 patients were confirmed SFTS cases because blood samples from these patients were PCR positive for SFTSV RNA and/or had antibodies positive to SFTSV. Major clinical manifestations of laboratory-confirmed case-patients are shown in Table 2. The frequency of major clinical signs and symptoms in these patients was 100% (22/22) for fever, 91% (20/22) for gastrointestinal symptoms (nausea, vomiting, diarrhea, abdominal pain), 55% (12/22) for myalgia, and 46% (10/22) for lymphadenopathy. Convalescent-phase blood samples were obtained from 21 patients; 95% (20/21) had leukopenia (leukocyte count <4 × 109cells/L) and 100% (21/21) had thrombocytopenia (platelet count <150 × 109/L). All patients recovered from their illness.

SFTSV RNA L and S segments were amplified by 1-step RT-PCR and then by a nested PCR that produced a 900-bp fragment and a 600-bp fragment, respectively. The PCR detection rate was 50% (12/24) for the S segment (Table 3) and 17% for the L segment. All L segment–positive patients were also positive for S segment. PCR products were confirmed to be SFTSV RNA by DNA sequencing.

Detection of Antibodies against SFTSV

Sensitivity of PCR and ELISA for Diagnosis of SFTSV Infection

The 22 confirmed case-patients (9 women and 13 men) ranged in age from 40 to 78 years (median age 63.5 years). Patients were hospitalized during days 1–7 after onset of illness (median 4 days). The first case of SFTS occurred on May 22, and the last case occurred on October 2; 71% of the cases occurring during July–August (Figure 2). We confirmed 22 cases of SFTSV infection in Yiyuan County in 2011.

There are 2 possible explanations for 2 patients having negative results for both laboratory tests. The first explanation is that levels of SFTSV virus and antibody were below detection thresholds. The second explanation is that patients were truly negative for SFTS and were ill because of infections with other pathogens.

Our study had 2 limitations. First, our sample size of reported clinical cases was small, which may have limited our ability to detect a difference between PCR and antibody detection rates during the first and second weeks of illness. Second, our clinical case definition might not have been sensitive or specific because we had access only to data that were reported by local clinicians (suspect cases reported to the Yiyuan County Centers for Disease Control and Prevention), and we did not know what specific infections were ruled out.

Our results suggest that RT-PCR or ELISA alone is insufficiently sensitive for diagnosis of SFTSV infection in the early stage of SFTS. However, combining RT-PCR and ELISA results can increase sensitivity to 86%. RT-PCR with primers for virus S segment was more sensitive than that with primers for virus L segment, which was likely caused by primer length. We conclude that in areas to which SFTSV is endemic, patients with clinically compatible SFTS (fever, thrombocytopenia, or leukopenia without another known infectious disease) should be treated with early supportive therapy, even before laboratory confirmation is available.

Dr Wen is an associate professor in the Department of Laboratory Microbiology, School of Public Health, Shandong University, Jinan, China. Her primary research interest is the pathogenesis of SFTSV.

We thank David H. Walker for reviewing the article.