Among humans, Creutzfeldt-Jakob disease (CJD) is a low incidence disease (≈1 case per million per year) that occurs as either a sporadic (sCJD) or a familial/genetic (fCJD) form. Whereas familial disease forms are linked to a mutation in the prion protein gene (Prnp), no clear epidemiologic risk factors have been identified for sporadic disease forms. sCJD is not a uniform disorder in terms of clinical and neuropathological phenotype. sCJD cases are classified as type 1 or 2 according to the polymorphism at codon 129 of the protease-resistant prion protein (PrP) sequence (methionine/valine) and to the electromobility of the proteinase K–resistant core of the abnormal PrP (PrPres) (1). Type 1 and type 2 isoforms in sCJD are believed to correspond to different transmissible spongiform encephalopathy (TSE) agents

Despite their relative rarity, several hundred iatrogenically transmitted CJD cases were identified during the past 60 years (2). Some data supporting the presence of infectivity in the blood of sCJD-affected patients were reported following the intracerebral inoculation of blood fractions from affected patients into rodents. These observations remain ambiguous because other studies did not confirm them (3,4).

In 1996, a new form of CJD, named variant CJD (vCJD), was identified in humans. Variant CJD was demonstrated to be caused by the agent that causes bovine spongiform encephalopathy in cattle (5). In the United Kingdom, 4 vCJD transmissions (3 clinical cases and 1 asymptomatic infection) were probably caused by the transfusion of non–leuco-depleted erythrocyte concentrates prepared from donors who later had positive test results for vCJD (6). More recently, a presumed additional case of vCJD infection was reported in the United Kingdom in a hemophilic patient who had received fractionated plasma products, including some units linked to a donor who had vCJD diagnosed with vCJD (7). Despite the epidemiologic evidence of bloodborne transmission in vCJD, bioassays performed on conventional rodent models failed to demonstrate the presence of infectivity in the blood (8). The lack of TSE transmission in conventional rodent models could be a consequence of a low infectivity level in blood from vCJD- and sCJD-affected patients (as described in sheep and rodent TSE models) (9) or of the existence of the species barrier phenomenon that limits the transmission of human prions to these animal models. The development during the last decade of transgenic mice models expressing PrP from others species that abrogate the species barrier now offers the potential to detect low level of infectivity (10).

In this study, we used 2 transgenic mouse models that displayed a high sensitivity to the vCJD or sCJD TSE agents to estimate the infectious titer in certain blood fractions from vCJD- and sCJD-affected patients. According to legislation of the United Kingdom, Germany, and France, the experimental protocol, including the use of human samples, was approved by UK National CJD Research & Surveillance Unit tissue bank: REC reference number 2000/4/157-German TSE reference center: Ref Nr 11/11/93, PHRC ref 2004-D50-353 for patient from France.

Previous studies reported a high sensitivity in transgenic mice overexpressing bovine PrP (tgBov) for the detection of the bovine spongiform encephalopathy agent. To demonstrate that tgBov also displays a high sensitivity to vCJD infection, we titrated to endpoint a vCJD isolate (10% brain homogenate) by intracerebral inoculation in this model (Tg110) (11). Considering the potential diversity of TSE agents that may cause sCJD, we decided to focus only on type 1 homozygous for methionine at codon 129 of the PRP gene (MM1) sCJD cases. An endpoint titration of a MM1 sCJD 10% brain homogenate was performed in a mouse model that express the methionine 129 variant of the human PrP gene (tgHu:Tg340) (12). This enabled confirmation of the capacity of the tgBov and tgHu models to detect the vCJD and sCJD MM1 agent, respectively, up to a 10−6 dilution of the reference brain homogenates (Table 1; 13). This value was within the range of the brain/blood relative infectivity reported in various TSE animal models (9,14). 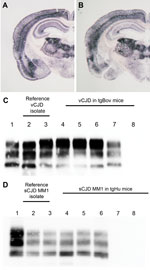 In the next step of our experiment, blood fractions (erythrocytes, plasma, and leukocytes) from 1 vCJD-confirmed patient were injected intracerebrally in tgBov mice. Similarly, plasma samples from 4 sCJD MM1 patients were inoculated with tgHu (Table 2). The blood fraction preparation was performed by using laboratory scale hematologic protocols (Technical Appendix), not by following the procedure applied by blood banking services. This method implies that the leucodepletion that is applied to blood labile products in most countries to reduce the vCJD bloodborne transmission risk was not performed. Brain tissue samples from each of the 4 sCJD cases were also inoculated with tgHu. On the basis of the incubation period (Table 2) and PrPres distribution pattern in the brain as assessed by using paraffin-embedded tissue blot, the TSE agents in those isolates were indistinguishable from those in the MM1 sCJD case that was used for endpoint titration (Figure, panel A).

No TSE clinical signs or PrPres accumulation were observed in the tgBov or tgHu mice inoculated with phosphate-buffered saline or brain and plasma from healthy human controls. The 3 blood fractions from the vCJD-affected patient caused a positive result but low attack rate among tgBov mice (Table 2). On the basis of these results, infectivity in erythrocytes and plasma was estimated to be 2.12 infectious dose (ID)/mL of inoculum. In leukocytes, the infectious titer was estimated to be 2.23 ID/mL of whole blood. According to these values and the hematocrit of the sample (Technical Appendix), the global infectious titer whole blood in the tested patient would be ≈4.45 ID/mL. Such infectious level is approximately equivalent to 1.4 µg of the reference vCJD brain sample that was endpoint-titrated (Table 1).

In tgBov inoculated with vCJD and tgHu inoculated with sCJD, the PrPres banding patterns observed by Western blot in animals challenged with brain homogenate and blood components were identical (Figure, panels C, D). These results support the contention that the TSE agent propagated in tgBov mice and tgHu were vCJD and sCJD agents, respectively.

The data reported here confirm the presence of infectivity in erythrocytes, leukocytes, and plasma from vCJD-affected patients and demonstrate unambiguously the presence of infectivity in the plasma of some, but not all, sCJD-affected patients. The infectivity levels that we measured in the tested vCJD and sCJD blood components were comparable to those reported in various TSE animal models. The number of cases included in our study was limited; a new experiment that would include a larger number of cases and different blood fractions from sCJD cases will be necessary to refine the data. However, these results represent a substantial input for assessing the risk for interindividual bloodborne transmission of sCJD and vCJD.

Mr Douet is assistant lecturer in ophthalmology at the National Veterinary School of Toulouse and a PhD student in the TSE group in the UMR INRA ENVT 1225 unit. His primary research interests are the pathogenesis of the prion disease with special emphasis on the risk of iatrogenic transmission.

This work was supported by a grant from the European Commission: Protecting the food chain from prions: shaping European priorities through basic and applied research (PRIORITY, N°222887; project no. FP7-KBBE-2007-2A) and by grants from the JPND program (DEMTEST: Biomarker based diagnosis of rapid progressive dementias-optimization of diagnostic protocols, 01ED1201A). The study in Germany was funded by the Robert Koch-Institute through funds of the Federal Ministry of Health (grant no. 1369-341).