Human papillomavirus (HPV) XS2 was isolated from warts on an immunosuppressed patient. After HPV vaccination, the warts resolved. HPVXS2 was also found in warts and normal skin of HIV-positive patients and rarely in HIV-negative controls. Further studies should elucidate the mechanisms that lead to wart clearance.

Human papillomaviruses (HPVs), small, double-stranded DNA viruses with a circular genome of ≈8,000 bp, are assigned to different genera and species on the basis of their major capsid protein gene (L1) nucleotide sequence, which reflects their tropism (cutaneous or mucosal) and potential to induce tumors. Most HPVs belong to genera alpha (e.g., genital and wart-associated types), beta, or gamma (cutaneous types) (1). HPV infections are common, and the prevalence of cutaneous viral warts is 3%–5% in children (2). Warts, benign HPV-induced lesions, usually regress spontaneously within several months. Immunodeficiency predisposes to persistent HPV infections and the development of generalized verrucosis (2,3).

We report the remission of cutaneous warts of prolonged duration in an immunosuppressed patient after HPV vaccination. The study was performed according to the declaration of Helsinki; written informed consent was obtained from the patient.

In 1979, a 41-year-old, White woman received a diagnosis of B cell chronic lymphocytic leukemia and was treated with chlorambucil and prednisolone, followed by radiation therapy and splenectomy, resulting in a durable, complete remission of the leukemia. In October 2002, breast cancer was detected in the patient; the breast was surgically removed, and lymph node dissection was performed. Six cycles of chemotherapy were administered during November 2002–March 2003. In February 2010, after a 12-year history of slowly progressing cutaneous warts, the patient sought medical care for numerous, flat, erythematous warts that were coalescing into large plaques on her forearms, backs of hands, and fingers (Technical Appendix Figure). Immunophenotyping revealed a markedly decreased CD4/CD8 ratio (Table). During October 2005–December 2009, the patient received topical and ablative treatments for the warts (salicylic acid, podophyllotoxin, 5-fluoruracil cream, imiquimod 5% cream, cryosurgery, surgical curettage, electrocautery, and CO2 laser therapy), but clinical improvement was not sustained.

Complete regression of cutaneous warts has been reported in persons after HPV vaccination (4,5); thus, we vaccinated the patient with the quadrivalent HPV (qHPV) vaccine (Gardasil, Sanofi Pasteur MSD SNC, Lyon, France), which contains L1 proteins of HPV types 6, 11, 16, and 18 as virus-like particles. Three doses were given during July 2010–January 2011. The patient’s pre- and postvaccination CD4/CD8 counts did not differ substantially (Table). In April 2011, three months after the third injection, all skin lesions had resolved (Technical Appendix Figure, panel B), and in July 2011 and March 2012, the patient was still in complete remission. 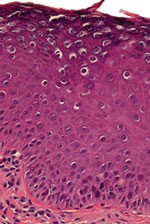 For virologic analyses, 20 biopsy specimens from the patient’s fingers, backs of hands, and forearms and 1 specimen each from the cheek and back were available (all were collected before the patient received the first dose of qHPV vaccine). DNA extraction and HPV typing were performed as described (6,7). Histopathologic analysis revealed features typical of benign cutaneous warts, including acanthosis, parakeratosis, and numerous koilocytes (Figure 1), similar to warts caused by HPV-3 (8). A2/A4 PCR (6) was used to amplify HPV DNA from all biopsy specimens obtained before vaccination. Sequences of the PCR products were analyzed by using BLASTn (http://blast.ncbi.nlm.nih.gov) and were 100% homologous to a 261-bp fragment named HPVXS2 (6). Three overlapping PCR fragments covering the entire genome of HPVXS2 (7,830 bp; GenBank accession no. KC138720) were amplified by using Phusion HotStart II HF DNA Polymerase (Fermentas, St. Leon-Rot, Germany) and ligated into pJET1.2/blunt (Fermentas): fragment 1, XS2-M19fw 5′-GAATTGAGTCTTGCACCAGAGG-3′ and XhoIrev 5′-ATCTCGAGTCGCTGTCGCTTT-3′; fragment 2, XS2-M15fw 5′-GTATCTAGCACACGAGAAGTAC-3′ and XS2–6413rev 5′-ATGGTGTCCCCGACAACCC-3′; fragment 3, XS2–6258fw 5′-CACCATGTAAACAGACTGCGTC-3′ and XS2-M8rev 5′-ACCCAAATTGTTCTTTAAACTTACC-3′.

Figure 2. . Phylogenetic tree based on selected human papillomavirus (HPV) major capsid protein gene (L1) open reading frames; the tree shows the grouping of HPVXS2. The phylogenetic analysis is based on the...

MacVector software version 12.7.3 (MacVector, Inc. Cary, NC, USA) was used to determine the organization of the predicted open reading frames (ORFs) and perform phylogenetic analyses. The results showed grouping of HPVXS2 within the alpha-2 species (Figure 2), and in each case, the L1 ORF was <90% homologous to the closest relative. Thus, HPVXS2 can be considered a novel HPV type (1).

HPVXS2 fragments were previously identified in hyperkeratotic benign papillomas, squamous cell carcinomas, and dermatitis on 3 renal transplant recipients at consecutive visits and in different parts of the body (6). In our study, HPVXS2 was identified in disseminated warts from a patient who had had a splenectomy and in benign skin warts from 3 HIV-positive patients. HPVXS2 DNA loads were well above 1.0 HPV/β-globin in the patient who had received a splenectomy and in an HIV-positive woman with HPVXS2 monoinfection. These virus loads are in line with those in warts induced by other HPV types (11). HPVXS2 was found more frequently on normal skin of HIV-positive than HIV-negative men. Thus, immunocompromised persons seem to have difficulties in clearing HPVXS2. However, virus loads remain low to moderate, and the infection in immunocompromised persons is clinically inapparent in most cases.

The patient in our study was free of warts 3 months after the last dose of qHPV vaccine, even though HPVXS2 is not closely related to the vaccine virus types (Figure 2). This observation correlates with published case reports (4,5,12,13), but it is still surprising, given that clinical improvement was not seen in 5 patients with HPV-6–positive condylomas who received the same vaccine (14). The qHPV vaccine was shown to induce type-specific humoral and cellular immune responses in an immunodeficient patient (15), but the mechanisms leading to regression of skin warts associated with heterologous HPV types have not been analyzed. One explanation could be that vaccination led to a general stimulation of the immune system, and innate immunity destroyed virus-infected cells.

We report a single observation; however, correlation does not necessarily imply causation, and a placebo effect is possible. Considering our findings, immunologic studies elucidating the mechanisms that lead to wart clearance and controlled clinical trials should be initiated.

Dr Silling is a scientific researcher at the Institute of Virology and coordinator of the German National Reference Centre for Papillomaviruses and Polyomaviruses, University of Cologne. Her primary research interests are small DNA viruses as well as their associated diseases.

We thank Monika Junk, Nabila Ristow, and Sabine Richter for excellent technical assistance and Zebulon Tolman for proofreading the manuscript.

Note added in proof: According to the International Human Papillomavirus Reference Center, HPVXS2 is a variant of the hitherto unpublished HPV-78 (de Villiers EM. Cross-roads in the classification of papillomaviruses. Virology. 2013;445:2–10).