A divergent parvovirus genome was the only eukaryotic viral sequence detected in feces of a Tunisian child with unexplained diarrhea. Tusavirus 1 shared 44% and 39% identity with the nonstructural protein 1 and viral protein 1, respectively, of the closest genome, Kilham rat parvovirus, indicating presence of a new human viral species in the Protoparvovirus genus.

Parvoviruses are small icosahedral viruses with linear single-stranded DNA genomes of ≈5 kb that are associated with a wide spectrum of illnesses in humans and animals. The subfamily Parvovirinae, which infects vertebrates, is currently classified into 8 genera, 5 of which contain human parvoviruses (Dependoparvovirus, Erythroparvovirus, Bocaparvovirus, Tetraparvovirus, and Protoparvovirus) (1). In 2012, bufaviruses 1 and 2 were sequenced from the feces of children with diarrhea from Burkina Faso and a child with nonpolio acute flaccid paralysis from Tunisia (2) and classified as founding members of the primate protoparvovirus 1 species (1). Bufavirus DNA also was detected in diarrheal samples from adults in Finland and Holland (3,4) and a child from Bhutan (5). A related protoparvovirus was recently found in feces and serum from rhesus monkeys with simian AIDS in primate research centers (6). Here we describe the genome of a new parvovirus that we propose as prototype for a new species, primate protoparvovirus 2.

The individual fecal sample within the pool containing this sequence was then identified by using PCR and underwent further deep sequencing as above, generating 11 more parovirus sequences. No other eukaryotic viral sequences were identified from 260,000 unique sequence reads from this patient. The near complete parvovirus genome was then acquired by filling genome gaps by PCR and amplifying 5′ and 3′ extremities using RACE (Rapid Amplification of cDNA Ends, Life Technologies). Amplicons were directly sequenced by primer walking. We named this virus Tusavirus 1 for Tunisian stool-associated parvovirus. 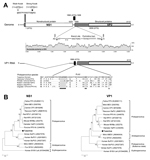 Figure. New parvovirus genome and phylogeny. A) Organization of the Tusavirus genome. Theoretical splicing for expression of viral protein (VP) 1 is shown. The alignment of the PLA2 regions of representatives of...

A nearly complete 4,424-bp genome (Tusavirus 1, GenBank accession no. KJ495710) was successfully acquired with partial 5′ untranslated region (243 bp), complete NS1 open reading frame (625 aa), complete viral protein (VP) 1 open reading frame (715 aa), and a partial 3′ untranslated region (68 bp). Tusavirus has a potential upstream start codon MSS in a weaker Kozak consensus sequence than MAQ (Figure, panel A), which we selected as the start codon. The Walker loop 396GPATTGKS403 [GXXXXGK(T/S)], which is an ATP- or GTP-binding motif, was found in the NS1. We also identified 2 conserved replication initiator motifs 127EFHIHVLLW135 and 187VLQYKHSQTR196. Potential splicing signals to express VP1 were identified on the basis of alignments to other protoparvoviruses and classic RNA splicing motifs (Figure, panel A). The phospholipase A2 (PLA2) motif was identified in VP1 N-termini with expected calcium-binding site and catalytic residues. The methionine codon of VP2 was located upstream of glycine-rich sequence (GGGARAGGVG). An unusual serine-rich sequence (SSSDSGPSSS) was also seen near VP1 N-termini.

Protein sequence alignments were made by using ClustalX version 2.0.3 (http://www.clustal.org) with the default settings; a phylogenetic tree with 100 bootstrap resamples of the alignment datasets was generated by using the neighbor-joining method based on the Jones-Taylor-Thornton matrix-based model in MEGA5 (http://www.megasoftware.net). Bootstrap values for each node are given if >70%. Resulting trees were examined for consistency with published phylogenetic trees.

We used a nested PCR targeting NS1 to determine the prevalence of this virus in the 180 Tunisia diarrhea samples. Primers Tusa-F1 (5′-GAAGAAGCTGGAAACTGTGGTCA-3′) and Tusa-R1 (5′-CTCGTCTTTCTCCCAGGCATCT-3′) were used for the first round of PCR, and primers Tusa-F2 (5′-ATTGCTCCAACACCAGTCATCA-3′) and Tusa-R2 (5′-TCTGGTCTGGTCCAATCTTCTTC-3′) for the second round of PCR. The PCR conditions were: 95°C for 5 min, 35 cycles 95°C for 30 s, 52°C or 51°C (for the first or second round, respectively) for 30 s, and 72°C for 1 min, a final extension at 72°C for 10 min. No samples except the one initially detected by deep sequencing were PCR positive, yielding a low prevalence of 0.56% (1/180) in this Tunisian population.

We detected fecal shedding of a previously uncharacterized parvovirus in a child with unexplained diarrhea. The 18-month-old girl showed twice daily liquid and greenish feces over 3 days but no fever (37.4°C), vomiting, or dehydration. To identify other viral infections in this patient, the Tusavirus-positive sample was individually analyzed by the same metagenomics method. No other mammalian virus was detected, suggesting a possible role for Tusavirus 1 in this patient’s gastrointestinal illness, although the lack of testing for pathogenic bacteria and parasites does not enable us to exclude these alternative explanations. Wider geographic sampling of human samples, including case–control PCR studies of unexplained diarrhea and serologic tests, are needed to define the prevalence and disease association of this new parvovirus species in different age groups and populations.

Dr Phan is a staff scientist at the Blood Systems Research Institute and Department of Laboratory Medicine, University of California, San Francisco. His research interests include novel virus discovery.