Of 5 outbreaks in South Korea during 2000–2011, 4 were caused by type O virus, 2 were caused by the Middle East–South Asia topotype, and 2 were caused by the Southeast Asia topotype. One of the 5 outbreaks was caused by type A virus (ASIA topotype, Sea-97 lineage) (Table; Figure 1, panel I). Middle East–South Asia topotype viruses that caused outbreaks in 2000 and 2002 were related to PanAsia lineage viruses, which were detected during 1999–2000 in China, Taiwan, Japan, and Thailand; the causative viruses had high genetic similarity (12). We assume that these viruses, which have predominated in these regions since 1998 (12), were introduced to South Korea in 2000 and 2002. Serotype O viruses that caused outbreaks in 2010 were identified as SEA type, Mya-98 lineage. This virus type was detected in 2010 in Asia, including Russia, Japan, China, Hong Kong, and Vietnam, and the genetic similarity of these viruses was high (Figure 1, panel I). Type A virus (ASIA topotype, Sea-97 lineage) was detected in South Korea in January 2010. This virus is similar to those detected in 2009 in China and Vietnam. Genetic analyses of all viruses detected in South Korea showed a correlation with viruses that predominated in neighboring countries (Figure 1, panel I). 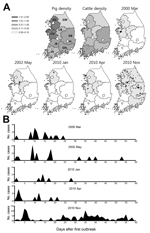 Figure 2. Affected regions and detection time points during 5 foot-and-mouth disease outbreaks, South Korea, 2000–2010. A) Affected provinces and regions and the densities of livestock (pigs and cattle) in 2010 on the...

Major putative factors for inter-regional or inter-farm virus transmission during the 5 foot-and-mouth disease outbreaks in South Korea were movement of humans or vehicles (Table). The 5 outbreaks that occurred since 2000 were analyzed by province (Figure 2, panel A). The disease occurred most frequently in Gyeonggi Province (5 times), followed by Chungbuk Province (4 times) and Chungnam Province (3 times). Therefore, these 3 provinces, which had the highest risk for infection, were characterized by a high density of pig and cattle farms. On the basis of analysis of 4 outbreaks, the second round of outbreaks occurred 8.0 ± 2.0 days after the first infected group had been identified (Figure 2, panel B). In the most recent outbreak in November 2010, the initial diagnosis was delayed for 1 week; many concurrent infections were detected, and no unique aspects of transmission after the first detection of the disease had been identified (Figure 2, panel B). Most infections occurred ≤25 days after the initial case, after which occurrence was intermittent (Figure 2, panel B).

International trade and globalization have recently been indicated as major factors for transmission of infectious diseases associated with livestock (6). Multiple sources of serotypes O, A, and Asia 1 of foot-and-mouth disease viruses, which have caused recent outbreaks in eastern Asia, are endemic to Southeast Asia (13). Incursion of these viruses from Southeast Asia into eastern Asia has been suggested because of the porous nature of borders (13). However, the Korean Peninsula is surrounded by water on 3 sides and shares its only land border with North Korea. We believe that inflow of illegal live animals and livestock products, which is generally the highest risk factor for foot-and-mouth disease (14), is negligible in the regions around South Korea. Access to suspected infectious materials from countries with outbreaks is fundamentally blocked by shipping regulations.

Although no evidence for confirmation of introduction is available, results of epidemiologic investigations have indicated that the 5 foot-and-mouth disease outbreaks in South Korea were related primarily to indirect transmission by humans who came into contact with suspected infectious animals or livestock products from countries in Asia to which the virus is endemic (Table) (2–7). In addition, imported hay or other imported animal products were probable sources of virus in March 2000 and January 2010 (Table) (2,4,8), and the viruses were transmitted to persons who had contact with these materials directly or indirectly. On the basis of the national mandatory reporting system for foreign workers (http://www.kahis.go.kr), we found that the number of persons from Vietnam, Cambodia, Thailand, and China who work on farms in South Korea has been increasing since 2005. The recent situation can be regarded as conducive for an increased risk for foot-and-mouth disease.

The outbreak pattern of foot-and-mouth disease in South Korea was more strongly correlated with outbreaks in countries in eastern Asia than with outbreaks in Southeast Asia. Outbreaks every 15 years caused by type O foot-and-mouth disease virus are predominant in Asia. The greatest risk for infection is currently by type O and A viruses, followed by type Asia 1 virus.

In summary, type O foot-and-mouth disease virus was responsible for 4 outbreaks in South Korea and type A virus accounted for 1 outbreak. South Korea might be at risk for foot-and mouth disease, given the high incidence of this disease at 2- to 5-year intervals (2000, 2005, 2010–2011, and 2013) in eastern Asia. Foot-and-mouth disease outbreaks in neighboring countries were a probable major source of introduction of this disease into South Korea. Once this disease is introduced, prevention of domestic transmission should include extensive restriction of movement of humans or vehicles during an outbreak.

Dr Park is a research scientist at the Animal and Plant Quarantine Agency, Gyeonggi-do, South Korea. His research interests are diagnosis and surveillance of foot and mouth disease, and development of vaccines and antiviral agents against this disease.

We thank the staff of the Animal and Plant Quarantine Agency for providing assistance during the study.

This study was supported by a grant from the Animal and Plant Quarantine Agency National Animal Disease Research Project.