After multiple discrete introductions of influenza A(H1N1)pdm09 virus into Sri Lanka, the virus was transmitted among humans, then swine. The spread of virus between geographically distant swine farms is consistent with virus dispersal associated with a vehicle used for swine transportation, although this remains unproven.

The first known transmission of influenza A(H1N1)pdm09 virus to humans from swine was in 2009. As the virus spread among humans worldwide, it was transmitted from humans to swine repeatedly (1), changing the global genetic landscape of swine influenza viruses. We previously reported the spillover of H1N1pdm from humans to swine and absence of North American triple reassortant, classical, and European avian-like swine viruses in swine herds in Sri Lanka during August 2009–May 2012 (2). Here, we extend these studies through August 2013 with the analysis of paired nasal and tracheal swab samples collected from 4,683 animals and serum samples from 3,351 animals (Technical Appendix Table 1) and comprehensively analyze full genomes of viruses isolated from samples from 26 swine (11 isolated in 2009, 4 in 2010, and 11 in 2011) and 35 humans (6 isolated in 2009, 17 in 2010, 9 in 2011, and 3 in 2012) and 2 publicly available hemagglutinin sequences of human H1N1pdm viruses from Sri Lanka. Sequences generated in this study are available in GenBank (KJ856002–KJ856446).

The single breakpoint recombination and genetic algorithm for recombination detection methods (3) excluded the presence of reassortants in our dataset; hence, we used concatenated genomes of 8 gene segments for all subsequent analyses. We conducted multiple-sequence alignment using MUSCLE (4) and optimized the sum of all of the pairs of characters manually. Phylogenetic trees and bootstrap supports were estimated by using the GTR+I+I" nucleotide substitution model as identified by using JModeltest (5) and the maximum likelihood method in RaXML (6). We inferred dates of introduction of major Sri Lankan human and swine lineages using the relaxed clock method under a Bayesian Markov chain Monte Carlo approach (BEAST v1.7) (7). 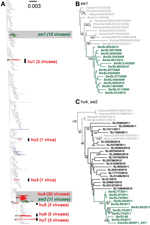 Figure 1. Phylogenetic relationships of influenza A H1N1pdm viruses isolated from human and swine during 2009–2012 in Sri Lanka. (A) Maximum likelihood tree generated from a concatenated dataset of 8 gene segment sequences...

In Sri Lanka, swine H1N1pdm clusters sw1 (2009/10) and sw2 (2011) were genetically distinct from each other and from other swine viruses isolated globally, indicating 2 separate introductions to local swine that circulated among swine for 11 and 4 months, respectively, for each cluster. The sw1 and sw2 lineages did not appear to establish long-term sustained transmission within pigs. However, the reduced surveillance of farms during the period 2012–2013 (Technical Appendix Table 1) means that this conclusion has to be qualified in regard to the sw2 lineage. We did not identify ancestors of sw1 in Sri Lanka, however sw2 appears to have been directly derived from hu4, which included the majority of the human viruses (20/35) sequenced from Sri Lanka. The lack of identification of a human ancestor for sw1 may be related to insufficient human influenza genomic data obtained from Sri Lanka during 2009–2010 (Figures 1, 2). Although the 11 sw2 viruses were isolated from pigs on farms A, C, and G, which were separated by >25 km from each other (Table, Figure 2), they form a monophyletic clade with no human isolates within this cluster. Even though the paucity of human viruses sampled is a limitation in this study, the data suggest a single introduction of human viruses into swine followed by transmission within and between swine farms for >4 months (Figure 2).

To clarify transmission patterns between affected swine farms in Sri Lanka, we obtained contact patterns by interviewing pig farmers using a structured questionnaire (Technical Appendix) with approval from the Ethics Review Committee, Faculty of Medicine, Ragama, Sri Lanka. There was no evidence of movement of persons or fomites between farms. However, during the peak demand period (November–December) of each year that surveillance was performed, a common truck owned by farm M (Table), driven by a single driver and an assistant, provided transportation from multiple farms to the abattoir, including from affected farms A, C, and G (Table). On some occasions, animals taken to the abattoir for slaughter were returned to the farm. Pools of water or body fluids were often noted within this truck, and it is possible that viable swine influenza viruses may have survived for varying periods. We did not test these fluids from the common transportation truck for influenza viruses; this is also a limitation of the study.

Of the 15 farms on which the common truck was used, swine on 3 (20%) were infected by a sw2 clade virus; on 2 farms on which the common truck was not used, no swine were infected. This association was not statistically significant (p = 1.0), however, given the small numbers of farms investigated. Our findings are consistent with dispersal of sw2 clade viruses in association with the truck to infect multiple farms that were geographically distant, but this remains unproven. It was previously documented that influenza viruses can remain viable for prolonged periods of time in water at a temperature of ≈28°C (comparable ambient temperature in the Western Province, Sri Lanka) (10) and are reported to survive longer periods on nonporous surfaces (11). Influenza virus has been detected in air samples from rooms of experimentally infected pigs (12) and in the exhaust air samples collected up to 1 mile away from the index farm (13), indicating the possibility of aerosol transmission for some distance. Notably, studies of the swine populations in the United States have demonstrated spatial dissemination of swine influenza viruses of human origin to match long-distance swine movements (14).

Despite widespread inter-farm transmission of sw1 and sw2, our results show that only animals on farm C were infected in both spillover events. Farms A and G, on which swine were infected by sw2 in 2011, appeared not to have had infected swine during 2009–2010, as shown by both virus isolation and serologic testing (Technical Appendix Table 1). Maternally derived antibodies transferred through colostrum from dams infected during 2009–2011 may have provided passive protection to offspring born in 2010–2011. On swine farms in Sri Lanka, female swine are used for breeding for ≈2–3 years. In experimental challenge, maternally derived antibodies provided some protection against disease, but not complete protection from infection (15).

This study demonstrates natural independent spillover events of H1N1pdm influenza viruses from humans to swine. H1N1pdm viruses appear to be spread by multiple, discrete introductions to swine, after which clonal expansion occurs within the swine. The spread of such virus lineages across multiple farms is consistent with virus dispersal by breaches of external biosecurity measures, including the manner of swine transportation, although this remains unproven given the small sample size. Unlike classical swine influenza, North American triple reassortant, and European avian swine viruses that have persistently circulated among swine for several decades in other countries (15), H1N1pdm does not appear to establish long-term lineages in swine in the absence of further reassortment. This observation requires confirmation in other geographic settings.

Dr Perera, formerly a postdoctoral research assistant in the School of Public Health, The University of Hong Kong, is senior lecturer in Department of Medical Microbiology at University of Kelaniya, Sri Lanka. His research focuses on the ecology and evolution of influenza viruses and emerging viral infections.

This research was supported by contracts HHSN266200700005C and HHSN272201400006C from the National Institute of Allergy and Infectious Disease, National Institutes of Health, Department of Health and Human Services, USA; an Area of Excellence Scheme of the University Grants Committee [AoE/M-12/06] of the Hong Kong Special Administrative Region Government; PhD studentship from The University of Hong Kong, Ministry of Education Academic Research Fund grant (MOE2011-T2-2-049); the Duke-NUS Signature Research Program, Agency of Science, Technology and Research, Singapore, the Ministry of Health, Singapore; and the Melbourne WHO Collaborating Centre for Reference and Research on Influenza, Department of Health, Australia.