We assessed the occurrence of human cutaneous anthrax in Georgia during 2010–-2012 by examining demographic and spatial characteristics of reported cases. Reporting increased substantially, as did clustering of cases near urban centers. Control efforts, including education about anthrax and livestock vaccination, can be directed at areas of high risk.

Anthrax, a zoonosis caused by the bacterium Bacillus anthracis, is associated with rural areas or agricultural production (1–3). Human infections often result directly from contact with infected livestock or contaminated animal materials (2). Although several countries have implemented successful control strategies, anthrax remains a reemerging threat to public health in areas with weak health systems. After the Soviet Union collapsed, the country of Georgia underwent funding cuts to public health and animal health infrastructure, limiting disease management (2). Human anthrax cases more than tripled in Georgia after Soviet governance discontinued; 118 cases were reported during 1991–1996, compared with 36 during 1985–1990 (4,5). Recent reports indicating a worsening anthrax situation in Georgia have raised concern about spread of anthrax to new areas (5,6). To assess this situation, we analyzed demographic risk factors and characterized spatial patterns of human cutaneous anthrax (HCA) in Georgia.

Data were anonymized and aggregated to each case-patient’s community of residence and mapped in a geographic information system. We extrapolated current population from the 2002 census using the United Nations medium variant population growth projections (http://data.un.org/). Cumulative incidences per 10,000 population were calculated for each community (total cases/median year population). National and community population data were obtained from GeoStat (http://geostat.ge).

We adjusted for community population heterogeneity using Empirical Bayes smoothing estimates of the cumulative incidence (Technical Appendix). Kernel density estimation was used to map the cumulative incidence risk/km2 (Technical Appendix). To identify community-level HCA spatial clustering, we used the Poisson model in SaTScan (7) with a maximum cluster size of 25% of the population at risk. We compared the proportion of urban and rural communities inside and outside clusters using a χ2 analysis (PROC FREQ, SAS Institute, Cary, NC, USA).

Cases occurred predominantly in males (209 [84%]) (Table 1). Butchering/slaughtering cattle as a source of infection was more common among male patients (143 [68%]); processing/handling meat was more common among female patients (28 [68%]). Case-patients’ median age was 43 years [range 5–79]. The adjusted incidence risk ratios from the negative binomial model showed a stronger association of risk in males (4.95 [95% CI 2.91–8.42]) than in females (Table 2). Persons 50–64 years of age were at greater risk than were persons in all other age groups. Risk did not differ between case-patients who processed/handled meat and those who slaughtered/butchered cattle. 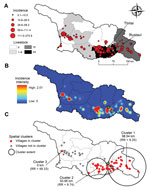 Empirical Bayes smoothed incidence per 10,000 population ranged from 0.11 (95% CI 0.03–0.37) to 213.8 (95% CI 72.8–552.6) (Figure 2, panel A). The kernel density analysis identified a higher risk per squared kilometer in the southeast and west (Figure 2, panel B). We identified 3 spatial clusters of high risk; the clusters comprised 58 communities with 197 cases (Figure 2, panel C). Cumulative incidence inside the clusters was 12.8/10,000 population compared with 0.96/10,000 population outside the clusters. The proportion (χ2 = 0.65, p = 0.4) of urban and rural communities (22 and 36, respectively) within clusters did not differ from the proportion outside clusters (urban: 14; rural: 24). Clusters 1 and 2 in the southeast bordered the densely populated urban area of the capital (Tbilisi) and were associated with grazing lands, whereas cluster 3 bordered the urban area of Poti in the west and was associated with a higher percentage of croplands.

Despite an apparent decline in HCA cases worldwide (8), incidence in Georgia has increased and is now comparable with that in Turkey, where the disease is hyperendemic (1,9,10). Our analysis identified clusters of communities that were of historical importance for HCA risk and new communities that represent areas of (re)emergence (6).

Our findings indicate that HCA cases were concentrated within specific areas associated with agriculture and in close proximity to urban centers (Figure 2), consistent with research linking urban livestock trading centers and markets to outbreaks and higher rates of HCA (5,9–11). Sick and dying animals are often slaughtered and brought to market quickly to mitigate economic losses, thereby exacerbating exposure risk while limiting livestock reporting (10,11). HCA is primarily associated with rural, agrarian areas (2,3,12), but we found no difference in the proportion of urban and rural communities in high-risk clusters. This association with urban zones suggests reliance on these areas for commerce, coupled with increased agricultural employment from 25% of the population in 1990 to ≈55% in 2010 (5,13). One hypothesis is that contaminated meat is brought into urban areas and sold at informal meat markets that because of fiscal constraints have little to no regulation.

Cases were predominantly linked to contact with infected livestock or meat, as observed elsewhere (2,3,9,11). Field work was a self-reported source of infection in 27 (10.7%) cases. This risk factor is not well documented and might reflect recall bias or unwillingness to admit to slaughtering infected animals. Our findings that males were at higher risk than females for HCA, as reported elsewhere (2,14) might reflect occupational exposures or gender roles, with males slaughtering/butchering livestock and females more involved in preparing meat (14). In contrast, no gender differences were reported in Turkey or Kazakhstan (3,9). Although age was not a risk factor in other regions (2,3), persons 50–64 years of age in this study were at higher risk for infection (Table 2), reflecting changing sociocultural practices related to an agrarian lifestyle.

Although the true cause of the increase in HCA cases is unknown, it is probably due to a combination of factors related to decreased public health funding and agricultural reform resulting in a shift from collectivization to private ownership (1,5,13). These factors, coupled with limited veterinary control and the cessation of compulsory livestock vaccination, have played plausible roles in the increased incidence of HCA. Livestock cases were out of sync temporally and spatially with human cases, indicating anthropocentric reporting or high incidence from relatively few animals, although differences in the aggregation of livestock cases limit the inference of spatial synchrony. Controlling HCA requires controlling the disease in livestock (1,2,9) and highlights the need for a One Health approach. Our findings can be used to formulate public health interventions aimed at controlling anthrax in livestock and increasing awareness of the disease, particularly in urban areas. Given the limited resources available, future efforts should focus on high-risk areas for livestock surveillance and control, such as targeted vaccination campaigns (15).

Mr Kracalik is a spatial epidemiologist at the Spatial Epidemiology and Ecology Research Laboratory, Department of Geography, University of Florida. His primary research interests include bacterial zoonoses and spatial analysis.

This work was funded by the US Defense Threat Reduction Agency’s (DTRA) Cooperative Biological Research Program in Georgia through the GG-18 Project. I.K. and J.K.B. were supported through the DTRA Joint University Partnership.