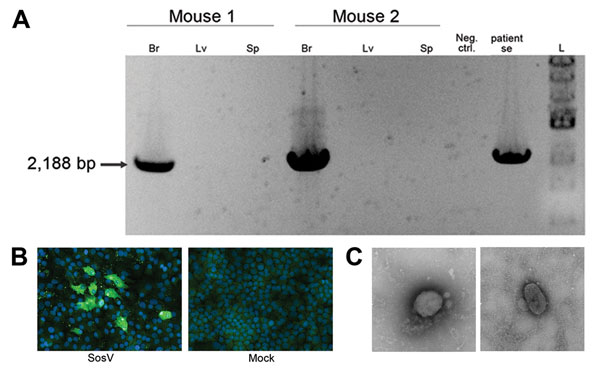 Figure 3. A) Virus isolation confirmed by reverse transcription PCRSosV was isolated after intracranial and intraperitoneal inoculation into 2-day-old suckling miceA specific reverse transcription PCR designed to amplify 2,188 bp of the SosV genome was performed by using RNA from brains (Br), liver (Lv), and spleen (Sp) of the euthanized animalsViral RNA was found only in the brain, not in liver or spleenB) Propagation of SosV in cell cultureHomogenized tissues (brain, liver, and spleen) were used to infect H292 cellsFixed monolayers were stained with convalescent-phase serum from the patient and anti-human AlexaFluor 488 antibody (Invitrogen, Grand Island, NY, USA)C) Sosuga virus particleVirus morphologic appearance was examined by taking supernatants from infected Vero-E6 cells, clarifying by slow-speed centrifugation, and depositing on grids for negative staining and examination by transmission electron microscopyPleomorphic virions can be observedNeg.ctrl, negative control; Se, serum; SosV, Sosuga virus.

Page created: January 15, 2014
Page updated: January 15, 2014
Page reviewed: January 15, 2014
The conclusions, findings, and opinions expressed by authors contributing to this journal do not necessarily reflect the official position of the U.S. Department of Health and Human Services, the Public Health Service, the Centers for Disease Control and Prevention, or the authors' affiliated institutions. Use of trade names is for identification only and does not imply endorsement by any of the groups named above.