Corynebacterium ulcerans may cause diphtheria in humans and caseous lymphadenitis in animals. We isolated nontoxigenic tox-bearing C. ulcerans from 13 game animals in Germany. Our results indicate a role for game animals as reservoirs for zoonotic C. ulcerans.

From a public health perspective, diphtheria is the most critical human disease attributed to coryneform bacteria (3). In recent years, cases of diphtheria caused by C. ulcerans have outnumbered those caused by C. diphtheriae (4). C. diphtheriae carriage is nearly exclusively restricted to humans; C. ulcerans is a zoonotic pathogen and has been found in various animal species that have contact with humans (5). C. ulcerans is most closely related to C. pseudotuberculosis, and distinction between these species is often difficult when using standard bacteriological methods (5). The aim of this study was to comprehensively characterize 13 C. ulcerans strains isolated from game animals in Germany.

Strains of C. ulcerans were isolated during routine bacteriological investigations in conjunction with necropsies of wild animals that were found dead or that had suspicious lesions during 1997–2013. Isolates of coryneform bacteria were subjected to conventional biochemical tests (3), and were evaluated after prolonged incubation at 37°C for as long as 14 days. For further characterization, commercial tests API Coryne and VITEK2-compact with cards for coryneform bacteria and corynebacteria and anaerobes (bioMérieux, Nürtingen, Germany) were used according to the manufacturer’s instructions. 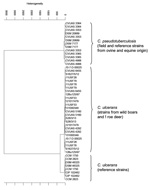 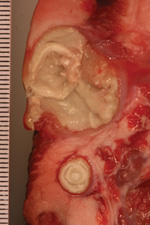 In total, 13 strains of C. ulcerans were isolated from 12 wild boars and 1 roe deer in 4 states of Germany (Table 1). The bacteria grew from >1 delimited pseudotuberculosis-like caseous abscess, arranged in concentric layers and ranging from 0.1 to 10 cm in diameter (Figure 2). All strains had positive reactions by using a traditional CAMP test inoculated with R. equi and a reverse CAMP test inoculated with S. aureus, indicating phospholipase D activity (3).

By using MALDI-TOF MS, all isolates were identified to the species level as C. ulcerans because they had score levels of 2.0–2.2. The comparison of the IR spectra of the 13 strains from game animals with a collection of reference strains showed a clear separation in 2 main branches for the 2 species C. pseudotuberculosis and C. ulcerans (Figure 1). Inside the C. ulcerans branch, all isolates from game animals clustered compactly together and were closely adjacent to a group of spectra formed by reference strains from humans.

With respect to its zoonotic potential, C. ulcerans is one of the most notable members of the genus and was referred to as an emerging pathogen in 2011 (9). Numerous reports state there is zoonotic potential for contact with companion or farm animals, but proven transmission of tox-positive C. ulcerans strains is documented for only 4 cases, involving 2 dogs, 1 cat, and 1 pig (8).

Limited information is available concerning C. ulcerans infection in wild animals. To our knowledge, 3 reports regarding tox-positive C. ulcerans infection in wildlife have been published: 1 involved 2 European otters from 2 widely separated regions within the United Kingdom (10), and the other 2 reports described NTTB strains in 2 wild boars in 1 report and 1 roe deer in the other report; these 3 cases were in the same area of Germany (5,8). An additional report on C. ulcerans with unknown toxigenicity in wildlife pertains to an outbreak among 350 squirrels from Canada, 63 of which had clinical disease (11).

Here, we provide comprehensive data on 13 NTTB C. ulcerans strains from game animals in Germany. The finding of infected game in the center of Middle Europe suggests an even wider occurrence and distribution in other European countries. Misdiagnoses of C. ulcerans isolates as C. pseudotuberculosis in the past because of similar pathology and similar phenotype cannot be excluded. Our finding of C. ulcerans in a wild boar specimen from 1997 could indicate that this pathogen has not only recently infected wildlife.

As also shown in this study, biochemical differentiation between C. ulcerans and C. pseudotuberculosis might be problematic, and basic conventional tests may not properly discriminate between the 2 species (3). By using the standardized systems API Coryne and VITEK2-compact for coryneform bacteria, erroneous identification was made of most isolates (10 and 11 cases, respectively) from game animals as C. pseudotuberculosis. For correct understanding of epidemiology and host range and for unequivocal determination of the involved pathogen to species level, additional methods such as FT-IR and MALDI-TOF MS or DNA sequencing should be used. Because partial rpoB sequencing is more discriminatory than 16S rDNA sequencing, a cutoff value of ≤95% similarity proved suitable for species identification within Corynebacterium (12) and also clearly enabled species identification in this study. Furthermore, partial tox- and rpoB-gene sequencing demonstrated a very close relationship between the 13 strains because no variations in these sequences were found (8).

Concerning the zoonotic potential for C. ulcerans strains from wildlife, there is no information available. With respect to wild boars infected with C. ulcerans, however, it is noteworthy that 3 diphtheria cases occurred in humans who had occupational contact with pigs (13,14).

Lack of DT expression in tox-positive strains has been described (7). Nevertheless, it can be expected that DT-producing C. ulcerans strains might occur in game animals, providing a reservoir for this microorganism. Because the C. diphtheriae and C. ulcerans DT sequences are quite similar, it might be reasonable to offer diphtheria toxoid vaccination to persons who have direct contact with game animals to prevent diphtheria-like illness caused by tox-positive C. ulcerans (4).

Dr Eisenberg is a specialist in microbiology at the Hessian state laboratory in Gießen and team supervisor of the bacteriology department. He has special interests in infectious zoo and wildlife diseases and zoonoses.

The Consiliary Laboratory on Diphtheria received grants for clinical research from the Robert Koch-Institute.