To the Editor: Buruli ulcer, a necrotizing skin disease caused by Mycobacterium ulcerans, is highly endemic to West Africa (1,2) and is characterized by large ulcerations on the lower limbs (60% of cases) as well as on the upper limbs (30%) and other parts of the body (10%). Although the mode of transmission is unknown, most cases of Buruli ulcer occur around swampy and riverine areas; children <15 years of age are most often affected (2,3). The recommended treatment consists of a combination of daily oral rifampin and intramuscular streptomycin for 8 weeks, supplemented by wound care when appropriate (4). Large ulcers may require debridement and grafting to facilitate wound closure, and physiotherapy is often indicated to prevent functional limitation, particularly for lesions located over joints.

In Liberia, 2 Buruli ulcer patients were reported in 1981 in the Foya region, along the Manor River basin; 4 more patients were observed in the same area in 1984 (5). Since then, some patients from Liberia have received treatment for Buruli ulcer in Côte d’Ivoire (6), and suspicious cases have been detected in some parts of Liberia since the end of a civil war in 2004.

Recently, Buruli ulcer cases have been suspected in 3 counties of Liberia, Bong, Lofa, and Nimba; these regions share borders with the Buruli ulcer–endemic regions of Côte d’Ivoire and Guinea. During 2012, the government of Liberia, with assistance from the Medical Assistance Program International and with technical support from the World Health Organization (WHO), conducted a rapid status assessment in these 3 counties. In January 2012, a core team of national and county health personnel was trained in the recognition and assessment of Buruli ulcer. Assessment was conducted during February 18–27, 2012, by a team made up of those who had received the preassessment training and WHO Buruli ulcer consultants.

During the preassessment training, notice was given to all health facilities to record all lesions with features suggestive of Buruli ulcer. The persons identified during this period then came to the nearest health facility to be examined by the assessment team or were traced to their homes. A detailed history was collected and physical examination conducted, and swab specimens and fine-needle aspirates (2 for each lesion) were obtained for confirmation of diagnosis by classical PCR (7).

On the basis of the WHO case definition for Buruli ulcer (1), 60 of 181 persons screened were suspected to have Buruli ulcer. All cases were documented by photography and registration on a modified version of the WHO Buruli ulcer assessment form (1). For 21 (35%) of the 60 patients, IS2404 PCR testing at Komfo Anokye Teaching Hospital in Ghana confirmed the clinical diagnosis; these patients received the recommended treatment for Buruli ulcer. Those with negative test results received wound care and supportive management. 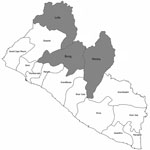 Figure. . . Counties in which cases of Buruli ulcer were found during 2012 (gray shading), Liberia.

Our findings suggest that Buruli ulcer in Liberia may be more prevalent than previously thought. Although only 3 of 15 counties were assessed, results show that Buruli ulcer has not disappeared from Liberia and that the absence of regular reporting should be investigated. A long civil war and lack of familiarity with the disease by health care workers may have contributed to poor reporting.

It has been almost 3 decades since the last published report of Buruli ulcer cases in Liberia (5), but other studies have found the disease in countries many years after it was last reported. In Cameroon, a case search in 2001 in 2 districts where cases had last been reported 24 years earlier found 436 active and inactive cases (8). In southwestern Nigeria, a case search in 2006 found 14 active and inactive cases 30 years after the most recent publication (9). More recently, in 2012, a similar situation was reported in Gabon (10).

MAP International (employer of J.A. and F.Z.) provided financial assistance for the assessment in the counties.

Page created: January 22, 2014
Page updated: January 22, 2014
Page reviewed: January 22, 2014
The conclusions, findings, and opinions expressed by authors contributing to this journal do not necessarily reflect the official position of the U.S. Department of Health and Human Services, the Public Health Service, the Centers for Disease Control and Prevention, or the authors' affiliated institutions. Use of trade names is for identification only and does not imply endorsement by any of the groups named above.