To the Editor: Rickettsia rickettsii, R. felis, and R. parkeri, strain Atlantic rainforest, have been characterized after being found in areas to which Brazilian spotted fever (BSF) is endemic (1,2), which indicates the complexity of their epidemic and enzootic cycles. The Atlantic rain forest is one of the largest and richest biomes of Brazil, and antropic action has intensely influenced its transformation. Most BSF cases and all BSF-related deaths are recorded in this biome area.

Many BSF cases were recorded in Paraíba do Sul river basin, one of the most urbanized and industrialized areas of Brazil. To better understand arthropod and Rickettsia diversity in this area,, we analyzed 2,076 arthropods from Rio de Janeiro state, Atlantic rain forest biome.

During October 2008–November 2009, we collected ticks and fleas from hosts and environments in 7 cities where high numbers of BSF cases were recorded (Rio de Janeiro State Health Secretary, unpub. data) and where fisiogeographic characteristics differed. After morphologic classification (3), the arthropods were individually separated or grouped by sex, developmental stage, and host for total DNA extraction (4). 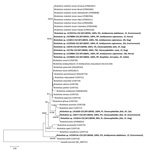 Figure. . . Phylogenetic inferences by neighbor-joining method from 1,000 replicated trees based on partial sequence of the Rickettsia gltA gene (CS2 401 bp). Evolutionary distances were estimated by the Kimura 2-parameter...

PCR analysis showed Rickettsia DNA in 11 individual or pooled samples. This finding indicated minimal infection rates of 0.2% (4/1,723) for A. cajennense ticks, 50% (2/4) for A. dubitatum ticks, 3.0% (1/33) for B. microplus ticks, 100% (1/1) for C. canis fleas, and 2.8% (4/143) for C. felis fleas. Expected amplicon size, determined by using the gltA 401-bp primer set, was observed for all positive samples. Two were also positive by PCR for gltA 834 bp and 4 for ompA primer set (Technical Appendix). The sequences were deposited in GenBank; BLASTn analysis (http://blast.ncbi.nlm.nih.gov/blast.cgi) indicates that these sequences belong to AG (ancestral) or SFG rickettsiae (Figure).

Epidemic manifestations of rickettsial diseases vary by ecotope characteristics, human activity, and vector bioecology in natural foci. BSF is a clinically distinct rickettsial infection in foci to which it is endemic. BSF-related illness and death vary by the Rickettsia species that can coexist in a given area and that can share or not share epidemiologic elements.

Molecular identification of R. rickettsii in A. cajennense ticks was recorded only in the Paraíba do Sul River basin of southeastern Brazil (8), as confirmed in our study. This eco-epidemiologic aspect, its great anthropophily, and its presence in all municipalities surveyed, with absolute frequency greater than other species, demonstrates the possible effect of this tick on epidemic cycle development for the analyzed region, which does not seem to occur in other regions.

Our finding of C. felis fleas in 6 of the 7 outbreaks investigated highlights the possible role of this flea in maintaining Rickettsia in Rio de Janeiro state. C. felis and C. canis fleas infected with R. rickettsii seem to confirm this potential. Nevertheless, the real epidemiologic value of this report in the BSF cycle deserves to be further investigated.

Our results indicate that dogs and horses are the primary vertebrates in the Rickettsia enzootic cycle in the investigated focus, and, considering their common presence in human environments, they must be important in maintaining possible rickettsial vectors to humans. These results contribute to the mapping of BSF-endemic areas and to the understanding of the circulation and epidemiology of Rickettsia sp. in an area with one of the highest fatal concentrations of BSF.

We thank the Secretaria de Saúde do Estado do Rio de Janeiro for its help in the focus area and for notifying us about the BSF cases.