In 1992, a rhabdovirus-like virus was isolated from lung and kidney of a white-beaked dolphin (Lagenorhynchus albirostris) that had beached along the coast of the Netherlands (5). Although no macroscopic or microscopic lesions were observed at necropsy, negative contrast electron microscopy showed typical rhabdovirus-like, bullet-shaped particles in Vero cell cultures that showed a focal cytopathic effect (5). After this rhabdovirus-like virus was injected intracerebrally into brains of 1-day-old suckling mice, they died within 5 days (5). We report genetic and phylogenetic characterization of a dolphin rhabdovirus (DRV) and evaluated the seroprevalence of DRV-neutralizing antibodies by using serum samples from various marine mammals collected during a 10-year period (2003–2012). 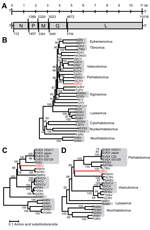 Genomic termini of DRV were determined by using a 3′ and 5′ rapid amplification of cDNA ends PCR and Sanger sequencing of obtained PCR amplicons. The complete genome of DRV (GenBank accession no. KF958252) consists of 11,141 nt and has a typical rhabdovirus gene arrangement of 5 major open reading frames (ORFs) in the order 3′-nucleoprotein (N), phosphoprotein (P), matrix (M) protein, glycoprotein (G), and large (L) protein-5′ (Figure, panel A, Appendix). No additional ORFs ≥300 nt were detected. Between the major ORFs of DRV, intergenic sequences were present that ranged in size from 34 (P–M) to 83 (G–L) nucleotides. Putative transcription initiation and transcription termination polyadenylation sequences were AACA(G/U) and AUGA7, respectively.

To evaluate whether DRV or related viruses circulate among species of cetaceans, we performed serologic screening by using a virus neutralization assay as described (5). The specificity of this assay was tested by using a panel of rhabdovirus-specific antisera obtained from cetaceans of various species (5). The serum samples had been collected for diagnostic purposes from mainly juvenile cetaceans stranded along the coast of the Netherlands during 2003–2012. These species included 2 Atlantic white-sided dolphins (Lagenorhynchus acutus), 79 harbor porpoises (Phocoena phocoena), 9 striped dolphins (Stenella coeruleoabla), and 6 white-beaked dolphins (Lagenorhynchus aIbirostris). Serum samples from 145 bottlenose dolphins (Tursiops truncates) from the collection of the Dolphinarium Harderwijk (Harderwijk, the Netherlands) were also tested. DRV-neutralizing antibodies were detected in serum samples from 1 bottlenose dolphin (7%), 5 striped dolphins (55%), 1 white-beaked dolphin (17%), and 3 harbor porpoises (4%). These results suggested that DRV or closely related viruses continue to infect members of cetacean species (6).

This study was supported by the European Community Seventh Framework Program (FP7/2007–2013) under the project European Management Platform for Emerging and Re-emerging Infectious Disease Entities, European Community grant agreement no. 223498, and by the Virgo Consortium.