To the Editor: Highly pathogenic avian influenza (HPAI) viruses have caused considerable economic losses to the poultry industry and poses potential threats to animal and human health (www.oie.int/en/ and www.who.int/en/). Since 2003, influenza A(H5N1) viruses with a hemagglutinin (HA) gene derived from A/goose/Guandong/1/96–like viruses have become endemic to 6 countries (Bangladesh, China, Egypt, India, Indonesia, and Vietnam) (1) (www.cdc.gov/). Furthermore, HPAI viruses with an H5 subtype continue to undergo substantial evolution because of extensive genetic divergence and reassortment between other subtypes of influenza viruses. Especially in China, novel subtypes of H5 HPAI virus, such as influenza A(H5N2), influenza A(H5N5), and influenza A(H5N8) viruses, were reported during 2009–2011 (2,3).

Three viruses isolated from domestic ducks and wild birds were designated A/breeder duck/Korea/Gochang1/2014 (H5N8) (Gochang1), A/duck/Korea/Buan2/2014 (H5N8) (Buan2), and A/Baikal Teal/Korea/Donglim3/2014 (H5N8) (Donglim3). All 8 RNA genome segments of these viruses were amplified by using segment-specific primers and directly sequenced (5). Sequences of the 8 RNA segments of each virus were submitted to GenBank under accession nos. KJ413831–KJ413854.

Gochang1 virus has been shown to be highly pathogenic for chickens (intravenous pathogenicity index 3.0) (6). This finding was consistent with analysis of the HA gene, as shown by a series of deduced basic amino acid sequences (Gochang1, LREKRRKR/GLF, Buan2 and Donglim3, LRERRRKR/GLF) at cleavage sites of HA (6). This outbreak of influenza A(H5N8) infection in South Korea was reported to the World Organisation for Animal Health (7).

Nucleotide identity analysis with BioEdit version 7.2.5 (http://bioedit.software.informer.com/) and ClustalW (www.ebi.ac.kr/Tolls/clustalw2) showed that 3 distinct novel influenza A(H5N8) viruses emerged in South Korea. Gochang1 virus had 87%–97% sequence identities in the 8 genome segments with sequences for Buan2 and Donglim3 viruses, which had high sequence identities (>99.5%) with each other. Conservative amino acid residues within receptor binding pockets of HA (including E190, R220, G225, Q226, and G228; H3 numbering) were present in all 3 viruses, which indicated that these viruses retained affinity for the avian (sialic acid-2,3-NeuAcGal) cell surface (8). Although there was an I314V mutation in the NA of the 3 viruses, other mutations that encode oseltamivir and zanamivir resistance were not detected (9). 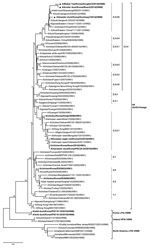 A BLAST (www.ncbi.nlm.nih.gov/genomes/FLU/FLU.html) search and phylogenetic analysis showed that these novel H5N8 subtype viruses likely originated from reassortment between A/duck/Jiangsu/k1203/2010 (H5N8) virus and other subtypes of avian influenza virus, all of which co-circulated in birds in eastern China during 2009–2012 (10). A phylogenetic tree of partial HA gene sequences for the 3 virus isolates from South Korea and other H5 subtype viruses (n = 72), showed that Gochang1, Buan2, and Donglime3 belong to the proposed H5 clade 2.3.4.6 (Figure) (10).

We characterized 3 distinct novel reassortant influenza A(H5N8) HPAI viruses during an influenza outbreak in South Korea. Buan2 and Donglim3 viruses showed high nucleotide identities, which suggested that the outbreak viruses in domestic ducks and Baikal teals might have an identical origin. Although research on the epidemiologic features of this outbreak is currently underway, it seems likely that on the basis of reassortant sequence features of the 8 genome segments, the 3 distinct viruses originated in eastern China. These influenza viruses are a potential threat to the poultry population in South Korea, including gallinaceous birds, during movement of domestic ducks through the distribution network of live bird markets.

We thank Hyuk-Man Kwon, Chun-Tae Im, and Kyeong-Hwa Han for excellent technical assistance; and the Animal and Plant Quarantine Agency and the Ministry of Agriculture, Food and Rural Affairs for conducting animal disease control for HPAI.