To the Editor: West Nile virus (WNV) is a mosquito-borne flavivirus in the Japanese encephalitis serocomplex of the family Flaviviridae (1). It has been reported in Africa, Asia, Europe, Australia, and North America, and is recognized as the most globally widespread mosquito-borne flavivirus (2). Isolation of WNV has previously been attempted in China, Japan and South Korea; however, no virus has been isolated (3–5). We report isolation of WNVs from mosquitoes in Xinjiang Uyghur Autonomous Region in western China. We also provide evidence of WNV human infections confirmed by IgM ELISA and seroconversion by 90% plaque reduction neutralization tests of paired serum samples obtained from persons with febrile illness and viral encephalitis in 2011.

Mosquitoes were homogenized, and viral RNA was extracted directly from mosquito pools and amplified by using PCR and primers specific for WNV envelope (E) and nonstructural protein 5 genes as described (6). A total of 12 pools of Cx. p. pipiens mosquitoes were positive for WNV, which was confirmed by nucleotide sequencing. The minimum infection rate for Cx. p. pipiens mosquitoes was 2.56 infections/1,000 specimens tested. 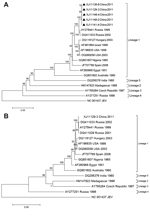 Phylogenetic comparisons of complete nucleotide sequences of E gene from the 5 Xinjiang isolates (Figure, panel A) showed a high degree of genetic identity of lineage 1 with other highly pathogenic WNV strains, such as WNV NY99 and isolates from Russia. Nucleotide and amino acid sequences showed ≥99% identity with isolates from Russia (1999–2004) (7).

This study and other reports of fever and human encephalitis caused by WNV in Xinjiang, China, in 2004 (8,9) suggest that infections with WNV might be greatly underestimated. In addition, although JEV is present in this region and WNV has not been isolated in China, some patients might have been given misdiagnoses of infection with JEV because of cross-reactivity between these 2 viruses (10). Therefore, nationwide surveillance programs for WNV in China are needed.

We thank Roger S. Nasci for providing suggestions for the study and comments regarding the manuscript, and Wei-Hong Yang and Yu-Zhen Zhang for collecting mosquitoes.

This study was supported by grants from the National Science Foundation of China (81290342,81171635), the Ministry of Science and Technology of China (no. 2011CB504702), and the State Key Laboratory for Infectious Disease Prevention and Control (Development grants 2014SKLID103 and 2014SKLID205), and the Collaborative Innovation Center for Diagnosis and Treatment of Infectious Diseases.

Page created: July 01, 2014
Page updated: July 01, 2014
Page reviewed: July 01, 2014
The conclusions, findings, and opinions expressed by authors contributing to this journal do not necessarily reflect the official position of the U.S. Department of Health and Human Services, the Public Health Service, the Centers for Disease Control and Prevention, or the authors' affiliated institutions. Use of trade names is for identification only and does not imply endorsement by any of the groups named above.