To the Editor: Carbapenem-resistant Enterobacteriaceae (CRE) continue to emerge as a serious public health threat throughout the world (1). CRE infections in the United States are often mediated by acquisition of Klebsiella pneumoniae carbapenemase (KPC) expressed by Klebsiella spp., although KPC is also found in other genera (2). The spread of KPC-producing, gram-negative bacteria in hospitals has been linked to severity of illness, co-existing medical conditions, exposure to antimicrobial drugs, and need for chronic care (3).

After reporting of CRE infections to the North Dakota Department of Health became mandatory in 2011, a total of 20 CRE cases were noted in 12 of 53 counties (2.9 cases/100,000 population [4]). Most cases involved infection with Enterobacter cloacae and occurred in Cass County, where the state’s largest city, Fargo, is located. We describe an outbreak of clonal carbapenem-resistant E. cloacae in a health care system in Fargo.

Sanford Health is a 583-bed, acute-care facility, representing ≈70% of acute-care beds in Fargo. The hospital handles >27,000 admissions/year and serves as a referral center for a large area of the state, and the only long-term acute-care (LTAC) facility in the eastern half of the state operates on its campus. During December 2011–December 2012, all isolates of Enterobacteriaceae with reduced susceptibility to ertapenem (MIC ≥1 µg/mL) identified at the hospital’s clinical microbiology laboratory were screened for carbapenemase production by using the modified Hodge test (mHT), according to Clinical and Laboratory Standards Institute recommendations (5). Identification and susceptibility testing were done with the MicroScan system (Siemens Healthcare Diagnostics, Tarrytown, NY, USA); MICs of carbapenems were confirmed with Etest (bioMérieux, Durham, NC, USA). Three carbapenem-resistant E. cloacae isolates from documented cases of CRE infection at the hospital during 2010 were analyzed for comparison.

To characterize carbapenem-resistant and mHT-positive isolates, we used PCR to amplify and sequence the carbapenemase genes blaIMP, blaNDM, blaVIM, and blaKPC by using established methods (6). The upstream sequence of blaKPC-positive strains was analyzed to determine the isoform of the transposon Tn4401 that harbored blaKPC (7). We investigated genetic similarity among isolates by repetitive sequence-based PCR; isolates with >95% similarity were considered clonal (6). We also sequenced the highly conserved hsp60 gene (8) and attempted conjugative transfer of the blaKPC gene by growing KPC-producing E. cloacae along with sodium azide–resistant Escherichia coli J-53. As part of the study, we examined records of patients from whom carbapenem-resistant E. cloacae was isolated. The study was approved by the Institutional Review Board at Sanford Health. 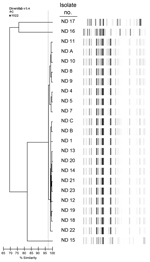 During December 2011–December 2012, a total of 19 single-patient E. cloacae isolates and 1 E. aerogenes isolate had positive mHT results. blaKPC was detected in 17 of the 19 E. cloacae isolates and in the 3 carbapenem-resistant E. cloacae isolates from 2010. For all 20 of those isolates, sequencing revealed blaKPC-3 in association with isoform d of the transposon Tn4401, and all isolates were clonally related (Figure). All 20 isolates also had an identical hsp60 sequence belonging to cluster VI in the Hoffman and Roggenkamp scheme (8). Conjugation of a blaKPC-containing plasmid into E. coli J-53 was successful for 1 strain.

All 20 of the patients from whom KPC-producing CRE isolates were obtained (17 from this study, 3 from 2010) had been hospitalized at Sanford Health during the 3 months before CRE isolation; 13 (65%) were admitted to intensive care. In addition, 13 (65%) patients had been admitted to the LTAC during the year before CRE isolation. Co-colonization with multidrug-resistant bacteria was documented in 16 (80%) patients, including extended-spectrum β-lactamase–producing and carbapenem-resistant organisms in 4 and 2 patients, respectively. Seven (35%) patients died; 3 (15%) deaths were attributed to CRE infection. One of the patients was a neonate 30 days of age.

The finding of KPC-3–producing E. cloacae in North Dakota contrasts with the predominant epidemiology of CRE across the United States. Most CRE cases nationwide are caused by KPC-producing K. pneumoniae (2). KPC-type β-lactamases were previously identified in diverse strains of Enterobacter spp. from an urban health care system in Detroit, accounting for ≈15% of CRE (9). In contrast, our genetic analysis reveals a uniform genetic background among KPC-producing E. cloacae, which suggests horizontal dissemination of an outbreak strain.

Because active surveillance programs do not exist at our facility, this study probably underestimates the extent of CRE spread. We found that patients with KPC-producing E. cloacae in this sample were exposed to an LTAC and concomitantly were colonized or infected with other multidrug-resistant organisms (9). Although the spatio-temporal origin of the outbreak (acute care vs. LTAC) remains undefined, these findings likely reflect longer exposure to the continuum of care and higher rates of co-existing conditions within the LTAC population. This outbreak of KPC-producing E. cloacae infections in a health care system in North Dakota highlights the infection control challenges of long-term care facilities and the potential role they play in CRE dissemination.

This work was supported by a Sanford Research seed grant to D.G. Funds and facilities provided by the Cleveland Department of Veterans Affairs, the Veterans Affairs Merit Review Program award number 1I01BX001974, and the Geriatric Research Education and Clinical Center VISN 10 supported this work as well. This work was also supported by funds from the National Institute of Allergy and Infectious Diseases of the National Institutes of Health under award numbers R01AI063517 and R01AI100560 to R.A.B. The Clinical and Translational Science Collaborative of Cleveland, UL1TR000439 from the National Center for Advancing Translational Sciences component of the National Institutes of Health, supports the work of F.P.

Funding organizations were not involved in the design and conduct of the study; collection, management, analysis, and interpretation of the data; and preparation, review, or approval of the manuscript. The content is solely the responsibility of the authors and does not necessarily represent the official views of the National Institutes of Health or the Department of Veterans Affairs.