The nationwide seroprevalence of hepatitis E IgG was determined among young men in Thailand. Overall seroprevalence was 14% (95% CI 13%–15%); range by province was 3%–26%. Seroprevalence was lowest in the south, an area predominantly occupied by persons of the Islam religion, whose dietary laws proscribe pork.

Hepatitis E virus (HEV), the etiologic agent of hepatitis E, is a nonenveloped, positive–sense single-stranded RNA virus, ≈7.2 kb in length, of the family Hepeviridae. HEV, identified in 1990, was a major cause of what was previously called non-A, non-B hepatitis (1,2). Hepatitis E occurs worldwide in ≈20 million persons annually, causing≈70,000 deaths (3). Clinical signs of hepatitis E are similar to those of other hepatitis virus infections; it is a usually self-limiting illness in healthy persons, who have mild symptoms or asymptomatic disease. Occasionally, fulminant hepatitis develops (1–3). The overall mortality rate of hepatitis E is 0.5%–4%, but it increases to 20% among pregnant women (3).

We collected serum specimens after gaining informed consent and permission for future studies as part of HIV-1 surveillance among young men in Thailand who were entering the Royal Thai Army (RTA) during 2007–2008. The RTA uses a lottery system to select ≈60,000 young Thai men at the district level of their family residence for enlistment annually. The men enlisted comprise approximately 10% of young men at the district level in Thailand. Sample sizes were calculated to detect a seroprevalence of ≈50% in each province to within 10% of the true value with 95% confidence. A total of 7,760 stratified randomized samples were chosen on the basis of the reported province of residence of the men before RTA entry. 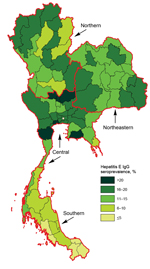 Figure. Map of Thailand, showing hepatitis E IgG seroprevalence in young Thai men, 2007–2008, grouped by reported province of residence during the 2 years before entry in to the Royal Thai Army....

The study population is described in Table 1. Most of the men were 21 years of age, unmarried, had graduated from middle school, and lived in rural areas. The sample size per province was 69–130 persons. The overall crude seroprevalence of IgG against hepatitis E virus was 14% (95% CI 13%–15%). We generated a spatial distribution map of hepatitis E seroprevalence across Thailand by province of residence using ArcView 8.3 (SPSS Inc) (Figure). In the univariate analysis, seropositivity for hepatitis E IgG was associated with age group and residence region, but not with education level, marital status, or residential area (Tables 1,2).

The hepatitis E IgG seroprevelence was lowest in the southern region. This region has the highest percentage of persons whose religion is Islam, known as Muslims, in Thailand. Because consumption of pork is proscribed by the religion of Islam, the region had the lowest pork consumption and pork production (Table 2) (11).

This study determined the nationwide seroprevalence of hepatitis E IgG in Thailand in young men from all 76 provinces. The overall hepatitis E seroprevalence at 14% (95% CI 13%–15%) is similar to results of previous hepatitis E seroprevalence studies in Thailand (9%–23%) (7–10). However, these comparisons are limited by differences in study design and the performance of the ELISA kits used (12). Our study and previous studies used an ELISA to measure antibodies against HEV capsid protein antigens. The range of hepatitis E seroprevalence by province was 3%–26%, indicating HEV exposure of young men across the country. The province of residence was defined as the main province of residence during the 2 years before military service entry. Young men from Thailand typically do not migrate: according to a 2008 national migration report, the percentage of migration between regions by Thai men 20–24 years of age was 8.5% (13). Our study population was similar; 10.6% and 9.7% reported a difference between birth and residence at the province and region level, respectively.

HEV is transmitted by the enteric route and is thought to have human and zoonotic reservoirs (1–3). In Thailand, the route of HEV transmission has not been clearly identified. Studies in Thailand suggested the association of hepatitis E transmission with pork contact and pork consumption (9,10,14). Previous studies noted higher hepatitis E seroprevalence in persons who frequently consume pig organ meat and in swine farmers than in poultry farmers and government officers (9,10). Moreover, HEV isolated from recovered Thai patients was shown to be closely related to HEV isolated from swine in Thailand (14).

HEV has 1 serotype with 4 major genotypes (G1–G4) (1). G1 has been associated with cases in developing countries in Asia and Africa (1). G2 was reported in outbreaks in Mexico and West Africa (2). G3 was found in sporadic cases from industrialized countries associated with consumption of HEV-contaminated food and is the most prevalent genotype in swine infections worldwide (2). The G4 genotype was identified in infected persons and swine in Asia (1).

In Thailand, reported swine HEVs belong to the G3 genotype and were genetically closely related to HEV isolates from patients (14). HEV G3 may be the main genotype circulating in Thailand. HEV G3 typically induces asymptomatic disease (1). This may be a reason for detecting a higher seroprevalence of HEV IgG compared with that of reports of hepatitis E in Thailand. To clarify these findings and identify circulating genotypes, we recommend a nationwide hepatitis E seroprevalence study of the general population to identify areas of HEV circulation.

This study revealed evidence of widespread HEV circulation in Thailand. Hepatitis E is not currently a major public health problem in Thailand, but outbreak reports in many countries in Asia, including the neighboring countries of Vietnam and Myanmar, suggest that outbreak prevention and disease awareness of hepatitis E in Thailand should be enhanced (2). Prevention of widespread HEV infection in Thailand may be accomplished by providing information to the general population about proper sanitation and adequate cooking of pork and to the food industry regarding biosafety practices while handling and slaughtering potential reservoir animals.

Ms Gonwong is a medical research technologist in the Immunology Section, Department of Enteric Diseases, Armed Forces Research Institute of Medical Sciences, Bangkok. Her research interests include seroprevalence and epidemiology of infectious diseases.

This work is supported by the Global Emerging Infections Surveillance and Response System, a division of the Armed Forces Health Surveillance Center, Silver Spring, Maryland, USA.