Salmonella enterica is a leading cause of invasive bacterial disease among adults and children in Africa (1). Other prominent invasive pathogens such as Haemophilus influenzae type b (Hib), Neisseria meningitidis serogroup A, and Streptococcus pneumoniae are combated by highly effective protein-conjugate vaccines; therefore, life-threatening disease caused by invasive Salmonella infection is likely to become a more prominent disease control priority.

Although typhoid fever was described in detail by William Budd in the 1800s, invasive Salmonella infection (either typhoid fever or invasive nontyphoidal Salmonella) has not been seen as a public health priority in Africa. At a workshop on typhoid fever held at the Pan American Health Organization in 1984 (2), it was reported that there was “a sense of optimism among participants for improved, worldwide control of typhoid fever.” Although 30 years later, there has been progress in the development of typhoid bacterial vaccines, the control of invasive Salmonella in Africa still seems remote. Many in the clinical and public health communities cling to the established ideology that clinical illness caused by nontyphoidal Salmonella in Africa is mostly self-limited enterocolitis and that animals are a likely reservoir; and it is frequently argued that since typhoid fever is associated with a relatively low mortality rate, there is a low burden of illness (BOI). Regarding African populations in which invasive nontyphoidal Salmonella (iNTS) and typhoidal Salmonella frequently co-exist, as summarized in 2 recent articles (3,4), we are still largely ignorant of the BOI, potential risk factors, routes of transmission, epidemiologic trends, and reservoirs of infection. 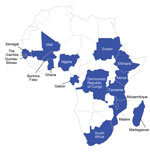 Figure. Countries from which bacteremia data were presented at the Invasive Salmonella in Africa Consensus Meeting 2014 in Blantyre, Malawi (blue shading).

To address these knowledge gaps related to invasive Salmonella in Africa, at the end of 2014, the Wellcome Trust and the Bill & Melinda Gates Foundation sponsored a consensus meeting of experts in Blantyre, Malawi. We hope that in the future, this meeting will be seen as a landmark event that initiated new collaborations between multidisciplinary teams across the continent. At the meeting, new data were presented from 17 political entities in Africa (Figure). Overview presentations from Melita Gordon (University of Liverpool, UK and the Malawi-Liverpool Wellcome Trust, Malawi) and Florian Marks (International Vaccine Institute, Typhoid Surveillance in sub-Saharan Africa Program, South Korea) emphasized the dynamic nature of invasive Salmonella epidemiology in Africa and the extraordinarily high childhood case-fatality ratios for iNTS disease (a term adopted by consensus at the meeting). New iNTS disease BOI estimates were presented that had been calculated through an initiative led by John Crump (University of Otago, New Zealand), suggesting very high incidence in countries of sub-Saharan Africa that mostly affected infants, young children, and young adults. The case-fatality ratio established by expert opinion and review of large case series was estimated at 20%. Together, these findings establish iNTS disease as a major and underappreciated cause of child and adult deaths in Africa.

Barbara Mahon (Centers for Disease Control and Prevention, United States) reported widespread multidrugresistant, extended-spectrum β-lactamase–producing Salmonella Typhimurium in western Kenya, which has only been identified sporadically in other countries in the region (5). Data presented from across the continent demonstrated the complicated “magic roundabout” of risk factors for iNTS disease, including malaria, malnutrition, and HIV. Melita Gordon showed how structural equation modeling can be used to unravel the complex relationships between these factors. Ginny Pitzer (Yale School of Public Health, United States) used typhoid data from low and high transmission settings to show how predictive mathematical modeling can help explore the impact of chronic carriage, subclinical infections, and natural immunity on vaccine effectiveness.

Although many in the audience suspected that human-to-human transmission is key to the biology of iNTS in Africa, novel approaches were discussed that may identify additional environmental and animal reservoirs. Sam Kariuki (Kenya Medical Research Institute, Kenya), Kudakwashe Magwedere (Department of Agriculture, South Africa) and Nigel French (Massey University, New Zealand) discussed the complexities of finding an animal source for iNTS–associated serovars, which are crucial because these represent additional potential targets for intervention. Sharon Tennant (University of Maryland, United States) reviewed the growing armamentarium of molecular and immunological tools now available to revisit the population epidemiology of iNTS disease and typhoid in Africa. This is critical given the sample sizes required for vaccine efficacy trials (≈9,000 persons) and the long timelines (2025–2035) for the development of some Salmonella vaccines set out by Allan Saul (Novartis Institute for Global Health, Italy).

To conclude, the group discussed the development of common strategies for diagnosis, antimicrobial treatment, case management, and vaccine and nonvaccine interventions that will address invasive Salmonella in Africa. However, it was strongly argued that further population-based studies are needed to better define natural immunity and seroepidemiology, the reservoirs and sources of these pathogens, acquisition and chronic carriage, and in relation to iNTS, the role of the food chain, water, and animals. Through advances in high-throughput whole genome sequencing described by Alison Mather (Wellcome Trust Sanger Institute, United Kingdom) and the analysis of very large datasets of bacterial genes and human clinical phenotypic information, it is hoped that these complex host-pathogen relationships can be further resolved to assist in the modeling of the gaps in our understanding. Finally, Imran Khan (Sabin Vaccine Institute, Coalition Against Typhoid, United States) highlighted the need for advocacy at the policymaking and funding levels to improve the visibility of these neglected diseases.

Dr. Heyderman is Professor of Infectious Diseases & International Health in the Division of Infection and Immunity, University College London. He was previously Director of the Malawi-Liverpool-Wellcome Trust Programme (MLW) in Blantyre, Malawi.

We thank Sarah Bowles and Norah Katuya for arranging the meeting.

We thank all contributors to the Invasive Salmonella in Africa Consensus Meeting 2014 (Table).

2Attendees are listed in the Table.

Page created: October 02, 2015
Page updated: October 02, 2015
Page reviewed: October 02, 2015
The conclusions, findings, and opinions expressed by authors contributing to this journal do not necessarily reflect the official position of the U.S. Department of Health and Human Services, the Public Health Service, the Centers for Disease Control and Prevention, or the authors' affiliated institutions. Use of trade names is for identification only and does not imply endorsement by any of the groups named above.