To the Editor: Dermacentor-borne necrosis erythema lymphadenopathy/tickborne lymphadenopathy (DEBONEL/TIBOLA) is an apparently benign, self-limiting rickettsial disease transmitted by Dermacentor ticks (1,2). Rickettsia slovaca was the first etiologic agent isolated, but other species, such as R. raoultii and Candidatus R. rioja, also might be involved (3–6). If the scalp is affected, a larger number of agents (including Francisella tularensis, Bartonella henselae, R. massiliae, R. sibirica mongolitimonae, and Borrelia burgdorferi) should be considered within the differential diagnosis of a similar syndrome recently named scalp eschar associated with neck lymphadenopathy after a tick bite (SENLAT) (7). Nevertheless, in Spain, only R. slovaca, Candidatus R. rioja, and F. tularensis are known to cause DEBONEL/TIBOLA/SENLAT (4,6). This entity is considered an emerging rickettsiosis in Europe; cases have been reported from Italy, France, Hungary, Germany, and Portugal (8).

We recently saw a patient in whom acute myopericarditis developed after he was bitten by a large tick on the scalp and showed clinical signs of DEBONEL/TIBOLA/SENLAT, most likely attributable to R. slovaca or Candidatus R. rioja infection. The patient, a previously healthy 28-year-old man, went on a day-long hiking trip to the northern mountains of Madrid (central Spain; mean altitude 1,300 m) on November 2, 2014. Three days later, he noticed a mild ache on the occipital area of his scalp and found an attached tick that he removed with his fingers. A week later, he sought care from an infectious disease specialist because of itchy discomfort at the area of the tick bite. 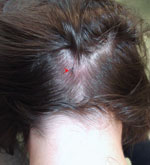 On a convalescent-phase serum specimen collected after 8 weeks, indirect immunofluorescence assays (IFA) for IgG against SFGR were performed in Spain’s national reference center for rickettsioses (Hospital San Pedro–Centro de Investigación Biomédica de La Rioja [CIBIR], Logroño, Spain). Commercial (Focus Diagnostics, Cypress, CA, USA) and in-house R. conorii, R. slovaca, and R. raoultii antibody testing showed an IgG titer of 1:512 against the 3 species. A subsequent cross-adsorption assay using R. slovaca, R. raoultii, and R. conorii antigens prepared on the basis of strains from the collection at Hospital San Pedro-CIBIR showed a decrease in IgG titers against R. conorii and R. raoultii to 1:64 and 1:256, respectively, whereas titer against R. slovaca remained at 512. IFA against Bartonella spp. and C. burnetii (Focus Diagnostics), chemiluminescence immunoassay for B. burgdorferi (Liason, DiaSorin, Spain), and in-house microagglutination assay for F. tularensis were not reactive. The patient recovered, with only a residual scarring alopecia on the occipital region of the scalp and without cardiac dysfunction after 9-month follow-up.

Myopericarditis is a rare complication of rickettsiosis, usually associated with R. rickettsii and R. conorii (9). Although tetracycline-induced cardiac adverse reactions have been described (10) and the patient reported here had signs of myopericarditis shortly after the initiation of doxycycline, he completed a 4-week treatment without recurrence. Therefore, the clinical picture seems unlikely to be attributable to doxycycline-induced toxicity. Because the patient was bitten in November (when only Dermacentor spp. ticks are active in central Spain), we have further epidemiologic evidence for attributing the infection to SFGR causing DEBONEL/TIBOLA/SENLAT. After serum adsorption, IFA titer against R. slovaca was 3-fold higher than that against R. conorii. R. slovaca and Candidatus R. rioja are the species most commonly found in D. marginatus ticks and in cases of DEBONEL/TIBOLA/SENLAT in Spain (8).

In view of the seroconversion to Rickettsia spp. with negative test results for other possible causative agents and the clinical response to doxycycline, rickettsiosis caused by R. slovaca or Candidatus R. rioja remains the most probable diagnosis. Because DEBONEL/TIBOLA/SENLAT is an emerging disease, physicians should consider that this entity may be associated with systemic complications similar to those of other tickborne rickettsioses.

We thank P. Anda for providing the F. tularensis antigen.