We conducted standard insecticide susceptibility testing across western Kenya and found that the Anopheles gambiae mosquito has acquired high resistance to pyrethroids and DDT, patchy resistance to carbamates, but no resistance to organophosphates. Use of non–pyrethroid-based vector control tools may be preferable for malaria prevention in this region.

During the past decade, a massive scale-up of insecticide-treated nets (ITNs) and indoor residual spraying (IRS) of insecticides in malaria-endemic areas worldwide have led to a substantial reduction in mosquitoes and, paired with the use of artemisinin combination treatments, in overall malaria prevalence and incidence (1). However, although most studied sites showed sustained low-level transmission, other sites had stable or resurging malaria cases and vector populations (2–5). It is generally believed that the recent resurgence in malaria was caused in part by increased vector resistance to pyrethroid insecticides related to the intensive use of ITNs and IRS (6–8). Insecticide resistance is among the most critical challenges in malaria control. Although several new insecticides have been tested as alternatives to pyrethroids for IRS, there is strong debate among decision makers at the national level on whether to implement IRS and which insecticides should be used. Comprehensive evaluation of insecticide resistance across different malaria-endemic areas will provide critically needed data on use of new IRS strategies as alternative malaria control tools for further reducing malaria incidence in Africa.

During April 2012–July 2013, we conducted this study in 7 sentinel sites across different malaria-endemic zones in western Kenya (Figure 1). Malaria vector dynamics and parasite prevalence have been studied in 3 sites (9), and ITN coverage was generally >80% (10). Bungoma, Emutete, Iguhu, and Emakakha are in the highland-fringe malaria epidemic area; Chulaimbo, Ahero, and Kisian are in the malaria-endemic basin region of Lake Victoria (lowland). All sample sites were in rural or suburban areas.

Agricultural and public health use of insecticides in each study site was surveyed by using questionnaire surveys in 30 randomly selected households per site. Mosquito larvae were collected from each study site, fed with TetraMin fish food (Spectrum Brands, Inc., Blacksburg, VA, USA), and raised to adults in the insectary at the Kenya Medical Research Institute in Kisumu. The insectary was not regulated for temperature and humidity; ambient temperature (average ≈24°C) and humidity (≈75% relative humidity) were used for the study. Emerged adults were fed with 10% sucrose solution, and 2- to 5-day-old females were used to determine insecticide susceptibility by using the standard World Health Organization (WHO) insecticide susceptibility tube test http://www.who.int/malaria/publications/atoz/9789241505154/en/. Four classes of insecticides were tested, including pyrethroids lambdacyhalothrin (diagnostic dose 0.05%), deltamethrin (4%), and permethrin (0.75%); organochlorine DDT (0.05%); organophosphate malathion (5%); and carbamate bendiocarb (0.1%) (11). The WHO-designated, pyrethroid-susceptible An. gambiae mosquito in Kisumu was used as a control.

Mosquitoes were exposed to each insecticide for 1 h and then maintained in holding tubes with 10% sucrose solution for 24 h. Mortality rates were scored after the 24-h recovery period; the susceptibility status of the mosquito populations was graded according to WHO criteria (11). Knockdown time (time required to render an adult mosquito unable to fly) was recorded every 10 minutes. Tests were done at 26°C ± 2°C and 80% ± 10% relative humidity during the 1-h exposure period and the subsequent 24-h period during which the mosquito would die or recover, with a 12D:12N photoperiod. We tested 200 mosquitoes per site per insecticide; that is, 8 replicates of exposure and 2 replicates of control, with 20 mosquitoes per replicate. A total of 8,400 (200 per site × 7 sites × 6 insecticides) female mosquitoes were tested. Knockdown rates are provided in the Technical Appendix.

We identified species of a subset of randomly selected susceptible and resistant mosquitoes from the bioassay by using 16s rDNA PCR (12). A total of 1,002 specimens were molecularly identified. The real-time TaqMan assay was used to detect knockdown resistance (kdr) gene mutations and genotypes at amino acid position L1014 of the voltage-gated sodium channel gene (12). A total of 579 mosquitoes were examined for kdr mutation. 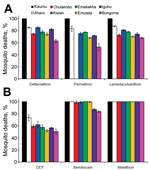 We found through a survey that pyrethroids were the most frequently used insecticide for mosquito control (Technical Appendix Table). Pyrethroids were also frequently used for control of livestock disease vectors and agricultural pests. Most (73.3%–96.6%) surveyed households used pyrethroids for malaria vector control in the form of ITNs and IRS (Technical Appendix Table). Carbamate was mainly used for livestock disease vector control, and organophosphate was used seasonally for crop pest control among a small proportion of households.

Although we detected widespread and strong phenotypic resistance to pyrethroids in An. gambiae mosquitoes, whether this resistance could result in operational ITN or IRS malaria control failure in the field is unknown. A report from Côte d’Ivoire showed that ITNs remained effective in reducing entomological inoculation rate in an area of higher kdr frequency in An. gambiae mosquitoes (14). Similarly, a cohort study in Malawi found that the use of ITNs reduced the incidence of cases of malaria by 30% in children in an area that has documented moderate levels of pyrethroid resistance and considerable malaria transmission (15). Cost-effectiveness is another consideration. A thorough assessment of the effect of resistance to pyrethroids on the efficacy and cost-effectiveness of LLINs and IRS for malarial disease and transmission will clarify the need to consider a shift from pyrethroids to alternative carbamate or organophosphate insecticides or to other integrated strategies to control malaria.

Ms. Wanjala is a PhD candidate at Kenyatta University and a trainee supported by a research training grant from the National Institutes of Health. Her research interests include vector ecology and malaria epidemiology.

We thank the staff of the Climate and Human Health Research Unit, Centre for Global Health Research, Kenya Medical Research Institute, Kenya, for field assistance. We thank 2 anonymous reviewers for comments and suggestions that greatly improved the manuscript.

This paper was published with permission from the director of Kenya Medical Research Institute. This study was supported by grants from the National Institutes of Health (R01 A1050243 and D43 TW001505).