Serum samples from patients in Kenya with febrile illnesses were screened for antibodies against bacteria that cause spotted fever, typhus, and scrub typhus. Seroprevalence was 10% for spotted fever group, <1% for typhus group, and 5% for scrub typhus group. Results should help clinicians expand their list of differential diagnoses for undifferentiated fevers.

Rickettsioses are zoonoses that are increasingly being recognized as noteworthy infectious diseases (1). They are caused by bacteria of the genera Rickettsia and Orientia, which are small, gram-negative, obligate intracellular bacteria that are transmitted to humans through bites of infected arthropod vectors, such as fleas, mites, ticks, and lice. These bacteria are able to invade various host cells, including vascular endothelium, causing characteristic symptoms such as rash and petecchial hemorrhages. The genus Rickettsia is divided into 2 main biogroups: spotted fever group (SFG) and typhus group (TG). The scrub typhus group (STG) previously belonged to the genus Rickettsia but now belongs to the genus Orientia (2), which consists of 2 species: O. tsutsugamushi and O. chuto (3).

The past 5 years have seen concerted efforts to understand the etiology of undifferentiated febrile illnesses, a group of diseases that includes rickettsioses. These efforts have confirmed the occurrence of infections with R. felis, transmitted mainly by the cat flea (Ctenocephalides felis felis), as a common cause of fever in rural areas (4–6). Studies have also shown the preponderance of R. africae, the causative agent of African tick-bite fever, as well as R. conorii and R. aeschlimannii, in different ecoregions of Kenya (7). The study reported here is part of a broader study aimed at identifying pathogens or their surrogates, such as immunoglobulins, in patients with febrile illnesses. It is hoped that these types of reports will help local clinicians expand their list of differential diagnoses for undifferentiated fevers. 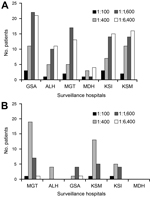 Serum samples were collected from patients with fever (>38°C) at 8 hospitals in 6 ecoregions of Kenya (Technical Appendix Figure 1). The samples were screened for IgG against whole-cell antigens of R. conorii for SFG, R. typhi for TG, and Karp and Gilliam strains of O. tsutsugumishi for STG as previously described (8,9). Serum samples that were reactive at 1:100 dilutions were further titrated by using 4-fold dilutions to 1:6,400.

Because scrub typhus has not been reported in Kenya, Western blot was performed to confirm specificity of the reactive serum samples, essentially as described before (5). For Western blot, 0.06 μg/well of the Otr47b antigen was applied to a 10% sodium dodecyl sulfate–polyacrylamide gel and separated by electrophoresis. The proteins were transferred to a nitrocellulose membrane (Invitrogen, Carlsbad, CA, USA). After blocking nonspecific binding at 4°C in 10% skim milk (Difco Becton, Dickinson, Franklin Lakes, NJ, USA), lanes of migrated Otr47b antigens were probed with serum samples that had titers >1:1,600. IgG against Otr47b antigen was detected by a horseradish peroxidase–conjugated anti-human IgG (Kirkegaard & Perry Laboratories, Gaithersburg, MD, USA) at a 1:25,000 dilution, signal visualized by chemiluminescence, and acquired on Kodak X-Ray Film (Carestream Health Inc., Toronto, Ontario, Canada). 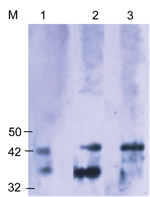 Table shows the prevalence of SFG and STG antibodies by patient age, sex, and animal contact. Female patients were 1.88 times more likely to be exposed to STG than male patients (p = 0.0169), unlike with SFG. Seroprevalence for SFG and STG increased with patients’ age (p<0.05). Having camels and dogs was positively associated with SFG (p<0.05) and having goats with STG (p<0.05).

Seventy-eight percent of the study population was >12 years of age; >50% were <5 years of age. This age weighting may have led to underreporting of seroprevalence, because seroprevalence increased with age for SFG and STG (Table). The overall seroprevalence of SFG was 10% (212/2,225), similar to the percentage reported among febrile patients in northern Tanzania (8%) (10). Substantial differences in seroprevalence were observed among patients in the surveillance hospitals in different ecoregions of Kenya (Technical Appendix Figure 2). Patients’ land use influenced seroprevalence; the highest rates of seroprevalence were recorded among the pastoralists of Garissa and Marigat, who keep large herds of cattle, sheep, goats, and camels. In other locales with high seroprevalence rates (Alupe, Malindi, Kisii, and Kisumu), farmers practice small-scale animal husbandry. IgG titers in most seropositive patients were high (1,600–6,400), perhaps indicating patients’ repeated exposure to other homologous or heterologous SFG organisms (Figure 1, Panel A). In contrast to seroprevalence of SFG, seroprevalence of TG rickettsioses was low (4/1,611, <1%) and comparable to that reported among febrile patients in northern Tanzania (10).

Considering that STG had not been reported in Kenya, its seroprevalence was surprisingly high (67/1,401, 5%) and was highest in Marigat (28/238, 12%) (Technical Appendix Figure 3). Marigat also had the highest number of persons with titers of 1:400 and 1:1,600 (Figure 1, Panel B). The reported determinants for STG are presence of rodents and vectors (chigger mites, especially Leptotrombidium deliense) that infest areas of heavy scrub vegetation.

Exposure to scrub typhus increased with age; persons >26 years of age were more likely to be seropositive than younger persons. Similar results were reported in a study conducted in Sri Lanka (11). Scrub typhus seropositivity was associated with contact with goats, perhaps because the short dense shrubs that are forage for goats are also the habitat for Trombiculid mites. As in South Korea but not Japan (12), more girls and women were exposed to tsutsugamushi disease than boys and men, possibly because women’s culturally sanctioned activities expose them to plant tissues inhabited by chiggers.

This study had several limitations. First, the serum samples used were from a 1-time encounter with the patient (acute-phase sample only). Convalescent-phase serum samples would have better defined the cases. Second, to demonstrate the disease unequivocally, the Trombiculid mites and the infectious Orientia spp. will need to be identified. Last, it remains to be determined whether the findings of STG in Kenya represents spread of Orientia species outside the tsutsugamushi triangle (an area that includes Pakistan, Australia, Japan, South Korea, and Thailand), as reported recently (3,13), or identifies a hitherto unknown disease-endemic focus.

At the time of this study, Ms. Thiga was a master of science student at the Jomo Kenyatta University of Agriculture and Technology. Her research interests include rickettsial diagnosis and epidemiology.

We are grateful to the patients for taking part in this study. We thank project staff, including medical officers, nurses, and laboratory technicians. This work is published with the permission of the director, Kenya Medical Research Institute.

Financial support for this study was from a grant from the Global Emerging Infection System and Division of the Armed Forces Health Surveillance Center.