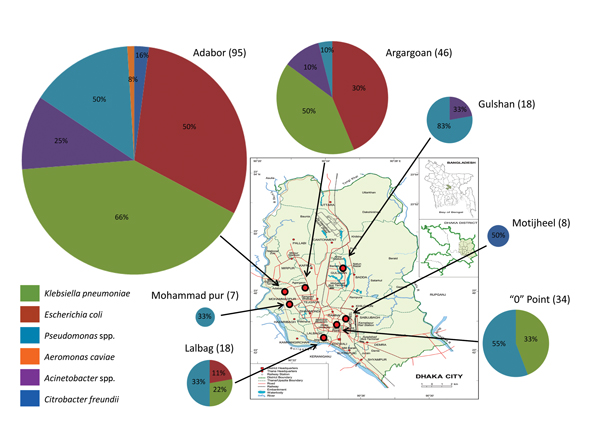 Figure 1. Diversity of New-Delhi metallo-β-lactamase variant 1–encoding species and the number found in 58 locations in 7 regions (red circles on map) of Dhaka, Bangladesh, October 2012. Individual sampling sites were within 2 km of each sampling region, and the number of sites varied from 6 to 12 per region. Pie charts indicate the proportions of different blaNDM-1–positive bacteria isolated in each region; colors indicate specific species. The diameter of each pie chart is directly proportional to the number of blaNDM-1–positive isolates collected in each region; actual numbers are shown in parentheses after the region name. Numbers within pie charts indicate the percentage of sites in each region in which the individual positive blaNDM-1–positive species were found. blaNDM-1 was detected in samples from all 7 regions and from 36 (62%) of the 58 sampling sites.